Priyanka Chopra Has The Most Special Birthday Message For Her Baby Brother, Siddharth Chopra

Priyanka Chopra Has The Most Special Birthday Message For Her Baby Brother, Siddharth Chopra

Lucky are those, who share the special bond with their siblings. Priyanka Chopra proves this with a heartfelt birthday message for her lovely brother.

The connection that you have with your sibling cannot be described in just one word. Nothing changes if you don’t speak to each other or if you are miles apart but you can always count on them as your best friend. Same is with Bollywood actress, Priyanka Chopra Jonas, who keeps sharing posts on her lovely relationship with brother, Siddharth Chopra.

She has taken to her Instagram and has left a wonderful birthday message for her brother. There is something so special and unique about their relationship that we can see. The message on her brother's birthday makes us understand their dynamics with each other. (Also Read: Priyanka Chopra Posts An Adorable Birthday Wish For Future Sister-In-Law Sophie Turner)

Priyanka Chopra And Nick Jonas To Have An Indo-Western Winter Wedding In Jodhpur, Details Inside The birthday message that she has written will make you relate to the camaraderie you share with your siblings. Here is what she has written, “Happy big 30 Sid! It has been amazing to witness watching you grow up to be such an incredible guy! Thank you for all the love and the laughs. You are very loved and I’m so proud of you.” No bond can match up the equation of a sister and a brother. The love is irreplaceable and Priyanka Chopra Jonas proves it in her post where she wished him on Raksha Bandhan last year. The post read, “I've got an army of brothers, and this one happens to be the leader of the pack (by default)! It's one of my favourite festivals where the sister ties a sacred thread around the brother's wrist for protection, symbolic of the beautiful bond between siblings. I can't imagine life without having my brothers in my corner... Love you guys!” Earlier Priyanka Chopra Jonas had shared a throwback picture of herself and her brother and had written a heartfelt message for Sid. The message read as “Old picture cause I'm not there with u but you are the most precious ever 'apple-of-the-eye' You are my sensitive, strong, problem-solver brother. Thank you for being as amazing as you are. Love you to bits.” 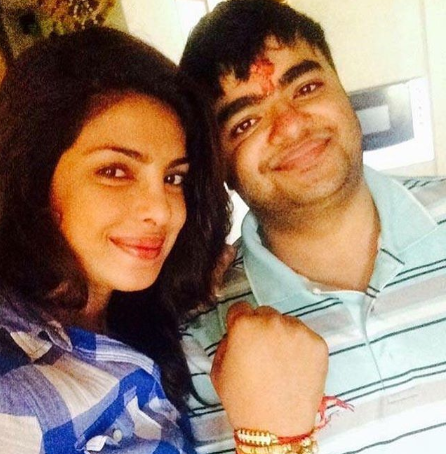 But it is not always rosy and beautiful in any relationship. At times it becomes a seesaw where you have to share each other’s griefs and sorrows as well. We are talking about the setback that family of PeeCee had faced after the wedding of her brother has been called off. Siddharth Chopra and Ishita Kumar were rumoured to be wedded off on the last week of April 2019, but instead, the latter had posted pictures of herself from a hospital. The pictures that she had shared indicated that Ishita had just undergone a painful surgery. She had written, “Recovering from surgery. Very painful but glad it's over.” A few days back, a report by a leading tabloid suggested that Siddharth and Ishita’s wedding has been delayed but not cancelled. Just two months after Priyanka's wedding with Nick Jonas, first-ever pictures from her little brother, Siddharth Chopra’s roka ceremony came out. Priyanka had shared a heartfelt post, congratulating Siddharth Chopra and his ‘then’ soon-to-be-missus, Ishita Kumar on their roka. Sharing a picture of the then engaged couple, PeeCee had written, “So proud of my baby brother. Ishita welcome to the family...you are so beautiful together...I wish you both the best for the future! Happy Roka!" (Also Read: Priyanka Chopra's Brother Siddharth Chopra's Wedding Was Called Off, Before Roka With Ishita Kumar) But later things changed with Ishita Sharma deleting all her pictures with Siddharth Chopra from her Instagram account. Priyanka Chopra Jonas and Siddharth Chopra too, have unfollowed Ishita Kumar on Instagram. Post Ishita’s recovery pictures from the hospital, she had posted a picture herself and had captioned it as, “Cheers to new beginnings. With a goodbye kiss to beautiful endings.” While this cryptic caption hinted at a possible breakup, Ishita’s parents’ comments on her post definitely added to the fire. While her mom wrote, “Close old book and write”, her dad commented, “We are with you; Feel the expanse of the universe and be the star you were born to be.” Here is the post: Those who don’t know, Priyanka Chopra Jonas’ brother, Siddharth Chopra’s wedding was called off for one more time before this, with his once-ladylove, Kanika Mathur. After getting engaged in an intimate roka ceremony in October 2014, Siddharth and Kanika were supposed to marry in February 2015 in Goa, and the preparations began months before the upcoming wedding. Apparently, Priyanka was taking a personal interest in the wedding preparations ensuring everything to be perfect. Kanika and Siddharth were dating each other for over three years before they decided to settle down. Siddharth also went to oversee the wedding preparations in Goa, and had posted on his Facebook page in December 2014, "Wedding plans. Early Morning flight to Goa." However, a few weeks later, another post from his account, which had left everyone confused. Siddharth had posted, "Single. Ready to mingle. Go Goa Gone. Wish everyone a very happy 2015." (Also Read: Priyanka Chopra's Ex-Sis-In-Laws, Ishita Kumar And Kanika Mathur Have Both Become Friends Now) 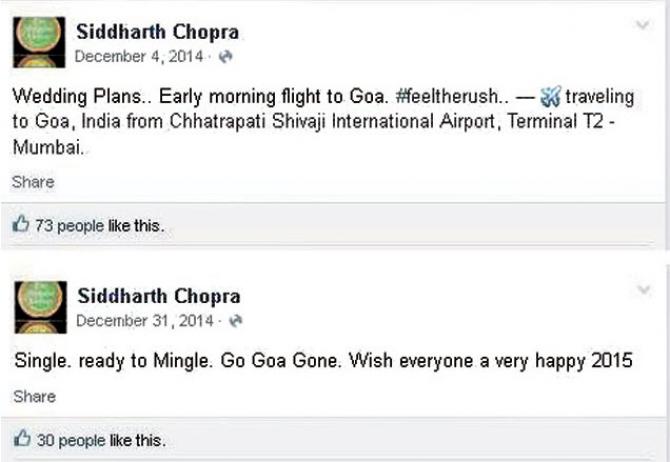 The posts beautifully show the siblings' memories together and focus on the fun and good times they have had.

Priyanka Chopra And Nick Jonas To Have An Indo-Western Winter Wedding In Jodhpur, Details Inside