Priyanka Chopra's Wedding 'Kalire' Had Her And Nick Jonas’s Silhouette Engraved On It, Pic Inside

Priyanka Chopra's Wedding 'Kalire' Had Her And Nick Jonas’s Silhouette Engraved On It, Pic Inside 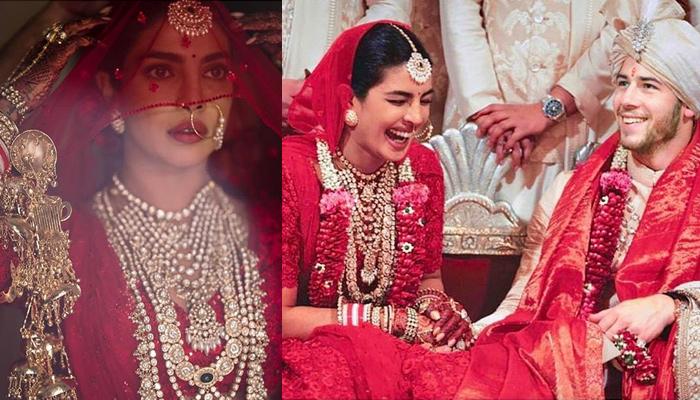 Some girls, from their early teens start imagining how they will look at their wedding day and who will they get married to. From discussing wedding poses with BFF’s, saving for the wedding, clicking fake-candid to figure out which angle looks the best, dreaming about the wedding cuisine to what’s going to be the most unique element at the wedding- these are some thoughts that every girl who has ‘bachpan se hi shaadi ka craze’ will relate to! And when it comes to celebrity weddings, they ensure how to turn every girl’s dream into reality. (Do Read: Unseen Picture Of Isha Ambani And Anand Piramal Twinning In Pale Honey-Yellow Avatars At Their Haldi)

One of the most beautiful brides of the last wedding season, Priyanka Chopra got married to the man of her dreams, Nick Jonas on December 01-02, 2018, at Umaid Bhawan Palace in Jodhpur. They got married as per two wedding rituals, a Christian wedding and a Hindu wedding. For her Christian wedding, PeeCee sported a one-of-a-kind, 175 ft. veiled, Ralph & Lauren wedding gown and for hetr Hindu wedding, the diva wore a Sabyasachi lehenga and looked beautiful. The ace designer keeps on sharing her wedding avatars and it only gives us ideas as to how our wedding dress should look like. (Also Checkout: 11 Bollywood Divas Who Became 'Brides Of Sabyasachi' And Looked Awe-Inspiring On Their Wedding) 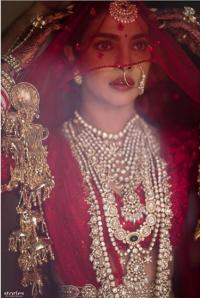 If you found Priyanka’s wedding lehenga scintillating, there’s much more to it! As fascinating as it may sound, Priyanka’s eye for detail has gotten another proof today. We all have heard that people adorn their hands with mehendi that depicts one’s love story. But have you ever heard of kalire that depicts one’s love story as well? Yes, Priyanka Chopra, on her wedding day had worn kalire that had motifs of her love story! Stylist, Ami Patel shared Priyanka's kalire story, created by kalire designer, Mrinalini Chandra which could be read as, “The Kalira story: For the first time ever Kaliras that were customised to tell a love story and planned with such amazing details by @mrinalinichandra. From a Symbol from Greece where Nick proposed to her to Cupid, to a cross and the Trishul from both their religions, to an engraved silhouette of both of them to Mr. Chip Potts - The couple’s favourite character from the beauty and the beast and many more. Each kalira was a symbol of their love for each other.” Here is a close-up of Priyanka’s kalire: 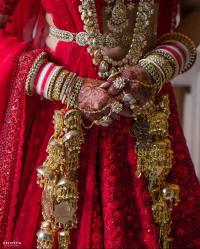 Fascinating, right? A day after their wedding, on December 03, 2018, we caught the very first glimpse of the newly-wed couple, Priyanka Chopra and Nick Jonas, with their wedding glow evident on their faces. Priyanka looked like a goddess in a teal-blue saree, middle-parted hair left loose, mangalsutra, chooda, sindoor and not to forget, her mehendi-clad hands. But there was something unique about her mehendi as well! Any guesses as to what it could be? PeeCee’s mehendi design had a guitar drawn on it, thus symbolising her hubby’s profession! Isn’t it super-cool? Here’s a closer look of the image of the same for you: (Must Read: Aishwarya Rai Talks About Arguments With Abhishek Bachchan, Says They're Strong Personalities) 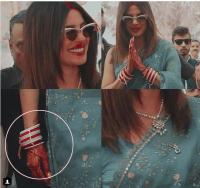 Ever since Priyanka and Nick have gotten married, she is not letting us keep our calm, thanks to the dreamy pictures that she is posting with her hubby, Nick. Another picture from their Jodhpur wedding that she had posted, had Nick carrying PeeCee in his arms and she, looking her best, donning a peach gown and a big smile on her face! Sharing the picture, our desi girl wrote, “Having our family and friends share our special day with us meant so much…the smiles, the words, the love and the hugs – all so thoughtful.” Here’s the picture:

Do you know, Nickyanka (as their fans fondly call them), had cut a giant 18-ft cake on the day of their Christian wedding? As per a Filmfare report, Nick had called in chefs from Dubai and Kuwait to prepare their wedding cuisine. Chef Karan Bakshi informed a portal that special instructions were given to learn and prepare Marwaad's authentic food. The same set of chefs was asked to make an 18-feet (6-tier) wedding cake for Priyanka and Nick. Isn’t it amazing! (You May Like: Dipika Kakar-Shoaib Ibrahim React On Sreesanth Partying With Shilpa Who Called Her Worst Winner) 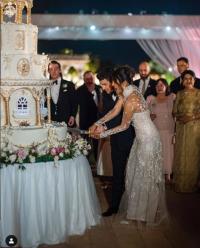 Do you know, when Priyanka was walking down the aisle, neither she nor Nick could control their emotions and they started crying. Speaking about the same with People magazine, the Quantico star shared, “It was all tears. All tears. I could not hold it in. I think I was nervous and scared. But as soon as the curtains opened, and I saw his face it was just like everything settled and I knew I was making the best decision of my life." Here is the video:

Do you know, there was a time when Priyanka’s mother, Madhu Chopra had given up on her marriage? In an interview with After Hrs, Madhu Chopra shared that she is glad with Priyanka finally finding the man of her dreams. She said, “Priyanka has always been ambitious about her career and I was just supporting her and wishing the best for her, as a mother. I used to pester her, but in the last two-three years, I had stopped. I had given up. Yeh sab cheez ka ek time hota hai, it’s all destiny.” But look what a great partner Priyanka finally has for life! (Also Read: Deepika Padukone Blesses Ranveer Singh, Karan Johar And Rohit Shetty At Simmba's Success Party)

Guys, how do you like PeeCee’s unique kalire story? Keep us posted!