Priyanka Chopra Jonas reacted on her husband, Nick Jonas getting special treatment from India. Scroll down to know more!

Bollywood actors, Priyanka Chopra Jonas and Ranveer Singh's friendship is all shades of goofy. Both of them leave no chance to tease around or pull each other's leg on social media. And Ranveer Singh being Ranveer Singh, took it a step ahead by bringing Priyanka's husband, the global pop star, Nick Jonas in the game. A few days ago, Ranveer Singh had partnered with Nutella for a giveaway, where winners would have gotten customized jars. The Lutera actor had taken to his Twitter handle to announce the same, and his tweet had caught the attention of 'National Jiju', Nick Jonas, as he had shown interest in the contest to win a jar for himself. (Recommended Read: Paras Chhabra Comments On Eijaz Khan Marrying His Ex, Pavitra Punia, Says 'Bhagwan Uska Bhala Kare')

Nick Jonas' had tweeted, "So what are the prizes?", and, "I'm gonna enter. I'm hoping I get one of those custom RANVEER jars." Keeping the custom of making our jiju happy, Ranveer Singh had taken it upon himself to fulfil his jiju's wish and had gotten him a customised jar of Nutella with Nick Jonas' name on it. Taking to his IG stories, Ranveer had posted a quirky picture, holding a jar of Nutella with Nick's name on it and had written, "Khaas apne jiju ke liye @NickJonas. Special consignment coming your way. With love from @NutellaIndia" atop it. 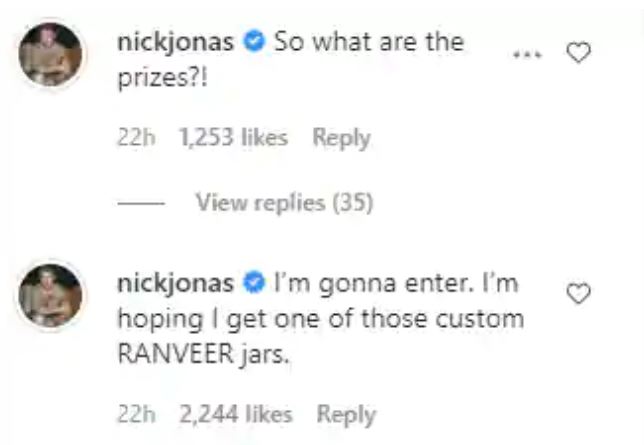 Now, the original Desi Girl, Priyanka Chopra Jonas has reacted on her husband, Nick Jonas getting such special treatment from India. Reposting Ranveer Singh's story on her IG handle, Priyanka wrote, "Waah! Special treatment!! @ranveersingh @Nickjnas" followed by a red heart emoji. Check it out below: However, this is not the first time that Ranveer Singh has goofed around his jiju, Nick Jonas on social media. Nick Jonas is a fitness freak, and he often shares snippets of his workout sessions on his IG handle. On February 3, 2021, Nick had found an admirer in his saala, Ranveer Singh. The pop star had shared a workout video, where he could be seen pumping his biceps with dumbbells. Sharing the video, Nick had written, “Let’s get it!” On Nick’s video, Ranveer had commented, “Oho, Jiju! Dolle-Sholle!” leaving their fans in splits. While one user had commented, “typical Sala behavior,” the other one had written, “a friendship we didn’t know we needed.” (Also Read: Shah Rukh Khan's FOMO Reaction On Gauri Khan's Post Of Their Son, AbRam Khan Acing 'Mike Tyson' Look) While, Ranveer Singh and Priyanka Chopra share a great bond, after Bajirao Mastani, there were rumours that Ranveer’s wife, Deepika Padukone is not on good terms with Priyanka. In an interview with Rajeev Masand, Deepika had cleared the air around things going sour between her and PeeCee and had shared, “I personally don’t make anything of it. At a personal level, I know her way too well for any sort of comparison. It feels odd and it feels weird. Even professionally, I think we are both doing extremely well. But our worlds are also completely different. What she wants to achieve and what she’s working towards is very different than what I’m doing. Although it is in the creative space, I think her demands and requirements are in completely different from mine.” 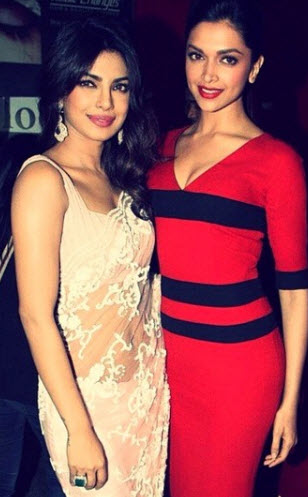 On December 20, 2018, Priyanka Chopra Jonas and Nick Jonas had hosted their third and final wedding reception in Mumbai for their B-town friends. Deepika Padukone and her hubby, Ranveer Singh had attended the 'Nickyanka' bash, and had ensured that they make heads turn! Deepika and Priyanka’s dance-off to the song, Pinga was the one to look out for at the 'Nickyanka' reception! What was further unmissable was the addition of Ranveer Singh to Pinga’s steps and the rap which he had dedicated to the newlyweds. (Don't Miss: Sanjay Dutt Twins With His Wife, Maanayata Dutt In Black To Celebrate Their 13th Wedding Anniversary)

Ranveer Singh and Nick Jonas' is a friendship we didn't know we needed!