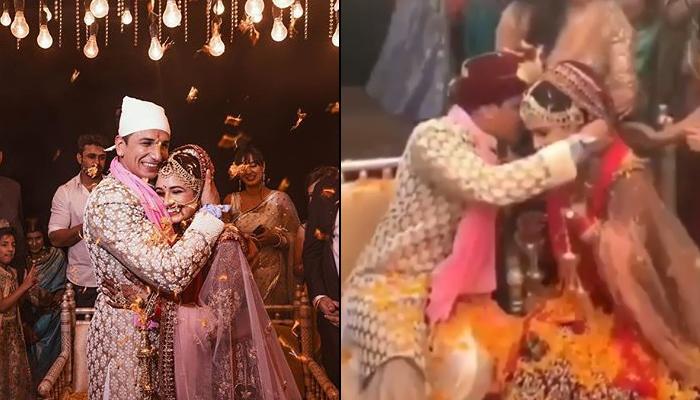 It is rightly said, marriages are made in heaven. And yet another celeb couple, Bigg Boss 9 lovebirds, Prince Narula and Yuvika Chaudhary makes it sound true. Prince and Yuvika solemnised their marriage on October 12, 2018, at the Sun.n.Sand hotel in Juhu, Mumbai, in the presence of close friends and family. (Also Read: Priyank Sharma Bumped Into Ex Divya Agarwal Who Arrived At Prince-Yuvika's Sangeet With Varun Sood)

Saat Phero Se Bandha Janmon Ka Yeh Bandhan, Pyaar Se Joda Hai Rab Ne Preet Ka Daaman… after dating for almost 3 years, this moment finally came into PriVika’s (Prince and Yuvika’s wedding hashtag) lives. Prince and Yuvika have taken their seven wedding vows and we got to you glimpse of the saat pheres they had taken around the holy fire. Their saat pheres was followed by the much-awaited moment when Prince puts mangalsutra around Yuvika’s neck. Here are the videos:

Prince looked dapper in a sehra, golden and cream-coloured sherwani, velvet shawl and an exquisite haar around the neck, and came with the Band, Baaja and Baraat to take his dulhaniya. Yuvika looked drop-dead gorgeous in a traditional red coloured lehenga with heavy gold embellishments and accessorised with a heavy necklace and maang teeka. Here’s the picture of the bride and the groom: 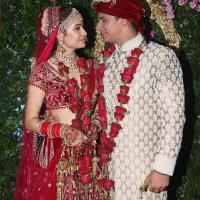 We also have a Nazm Nazm glimpse of Yuvika and Prince’s fun-filled varmala ceremony. In the video, PriVika can be seen exchanging garlands and just when Yuvika is about to put his varmala around Prince’s neck, his family and friends lift him up and makes it difficult for her to reach him. Checkout the video here:

Prince and Yuvika’s pre-wedding festivities started off on an auspicious note i.e. havan which was followed by the mehendi function in the evening and ring ceremony later. Then on October 11, 2018, Prince had the haldi ceremony with his ‘gang of boys’, and later in the evening, the couple hosted their sangeet and cocktail night. Finally, on the D-day, i.e. October 12, 2018, the morning witnessed Yuvika’s haldi, chooda and kalire rituals and at night, they became mister and missus forever. (Also Read: Prince Narula And Yuvika Chaudhary Had A Star-Studded Sangeet And Cocktail Night, Pics Videos Inside)

Prince and Yuvika shared the one-minute glimpses of their pre-wedding ceremonies on their respective social media handles. Posting the mehendi trailer, Prince wrote, “Dil wale a gai or ab le kar he Hai ge @yuvikachaudhary Thank you for this video @Epicstories.in”. And Yuvika captioned it, “Day one @princenarula With my big family thank u all lot more fun is coming now. Video by @Epicstories.in”.

Reminiscing about how love brewed between them, Yuvika shared in an interview, “First of all, when we came out of the house, we were friends. And in the house, Prince had some hope but when I didn't respond, he thought that I have some issues with him and I will never say yes. He was sure from the day one and I, like any other girl, was taking time. I was never in that frame of mind - the first date and then I will see. I was scared that whether I should take a step ahead or not. It was his love and faith that changed me. I am a very practical person, he is someone who thinks from his heart - whatever he says he does that."

The Om Shanti Om actress went on to say, “If you go back, his family took interest in me when Prince and I were in the house. His mom said that if she wants a girl for Prince, that should be like me. When he came out of the house, he told his parents that 'I like her, but she doesn't. I would like to meet her and then we will see.' That's how we started meeting but as friends. It was a very positive indication from his side and his family. Then, his family told my family about Prince and me and that's when my family gave me the permission to meet him. When we started meeting each other, everyone thought we are dating but we were getting to know each other. If we think of going ahead, will it work out or now - that was the true thought process." (Also Read: Prince Narula Sings A Punjabi Song For Yuvika Chaudhary, Her Reaction Is Not What We Expected)

Congratulations to the newly-wedded couple, Prince Narula and Yuvika Chaudhary! Love is a journey filled with a lot of ups and downs and when you decide to spend the rest of your life with the one you love, it becomes all the more beautiful. From achieving your biggest dreams of having a shoulder to cry upon whenever you feel low,