Prince Narula and Yuvika Chaudhary have indeed come on a long journey, from being co-contestants in Bigg Boss season 9, being secret lovebirds, a romantic proposal to now tying the knot. Prince and Yuvika are all geared up for stepping into the next phase in their lives and becoming each other’s forever today i.e. on October 12, 2018, at the Sun.n.Sand hotel in Juhu, Mumbai. The pre-wedding festivities began on October 10, 2018, with havan, mehendi, engagement and haldi ceremonies. (Also Read: Yuvika Chaudhary's Mehendi Recreates A Scene From Bigg Boss House When Prince Got Down On His Knees)

And now yesterday, on October 11, 2018, Prince and Yuvika hosted their star-studded sangeet and cocktail night. Their friends from the industry including Rashami Desai, Rannvijay Singha, Karan Kundrra along with girlfriend Anusha Dandekar, newly-wedded couple Keith Sequeira and Rochelle Rao, Claudia Ciesla, Mandana Karimi, Priyank Sharma, Terence Lewis amongst others, arrived in style at the function.

Prince and Yuvika looked as happy as ever with a different glow on their faces and their happiness has surely reached the sky-high as the much-awaited moment in their lives is finally here. While the to-be bride, Yuvika looked dreamy in an ivory lehenga with embellishments all over and she flaunted her mehendi all the way with her beautiful smile, the to-be groom, Prince opted for a peach-coloured kurta-pyjama with a touch of golden on the edges of his jacket. Yuvika later changed into a peach-coloured lehenga with a golden shimmery choli, perfectly colour-coordinating with her hubby-to-be. Checkout the fun-filled pictures and videos from their sangeet and cocktail night:

Sharing his excitement on being engaged, Prince said in an interview, "I am very happy to be engaged. Our families are. I do not care what trolls think about Yuvika and my relationship. Some have asked me why did I get engaged so early but such statements do not make a difference. They have no jobs in this world. I feel a show like Troll Police is the need of the hour." He further gushed, "I love Yuvika. We just announced it (our engagement). When I go back home, I know Yuvika is waiting for me. My life is very set right now. I am working and now I have a life partner. Everyone wants a good life partner." (Also Read: Suyyash Rai Won't Be Able To Attend Bestie Prince And Yuvika's Wedding, Writes A Heartfelt Post)

Prince and Yuvika had a memorable mehendi ceremony and sharing a glimpse of the same with a one-minute trailer of their crazy night, Yuvika wrote on her Instagram handle, “Day one @princenarula With my big family thank u all lot more fun is coming now. Video by @Epicstories.in Coordinated by @drrumrolls_media Mehndi Artist @bridalmehndiqueen Floral jwellery by @adiragofficial Decor by @q_eventsandweddings make up @Glamblush_makeup For outfit - @akashidesignerstudio Styled by - @shailshricouture”. And Prince captioned it, “Dil wale a gai or ab le kar he Hai ge @yuvikachaudhary Thank you for this video @Epicstories.in Coordinated by @drrumrolls_media Mehndi Artist @bridalmehndiqueen Floral jewellery by @adiragofficial Decor by @q_eventsandweddings”.

Prince and Yuvika had always kept their relationship under the wraps but the speculations did float on the media regarding their relationship status. Even their break up rumours once started doing the rounds, which was later refuted by Prince in an interview. He was quoted as saying, “Yuvika and I are going to be married very soon, so the rumours of our breakup are false. Come on, I have got a tattoo of her name. She supports me 100 per cent in every venture of mine." 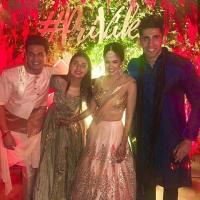 Prince added Yuvika’s name as his middle name and asked her not to do the same. Speaking about it, Prince had stated, “One day, I just thought of doing something special for Yuvika, and decided to take her name as my middle name. I never expected people to take notice of it; I just did something special for her and I am happy that she liked it." He went on to say, “I changed my handle in March; it’s just that people noticed it only recently. Why should only women change their names after marriage? I am the other half in this relationship. Also, I fell in love with her first and so, I should contribute equally if not more. I didn’t add her name to mine for publicity. In fact, I got her name inked on the back of my neck in February. If I were seeking publicity out of it, I would have done it on Valentine’s Day.”

He concluded by saying, “Who doesn’t fight in a relationship? We do fight, but then our love is too strong to let anything weaken it. Yuvika also wanted to change her name on social media, but I told her to do it after marriage. I did it because it was my way of professing my love for her.” (Also Read: Prince Narula And Yuvika Chaudhary Dance On Dhol Beats At Their Mehendi Ceremony, Videos Inside) 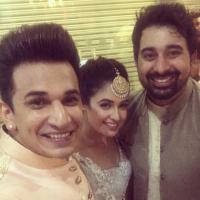