Pinkie Roshan shared a collage of the 'men in her life', Rakesh Roshan and Hrithik Roshan when they were at the age of 21. Check it out!

There is no relationship as beautiful as the one between a father and a son. They start as each others' favourite muses, goes on to become each others' biggest critics and then they finally become friends. For a father, his son's every little achievement seems too big. From speaking the first word to getting admission in a college, a father's chest always swells up talking about his son's milestones. On the other hand, for a child, his father is much more than a dad; he is a superhero who can fulfil his every wish. And an exactly similar relationship is shared between Bollywood actor, Hrithik Roshan and his father, Rakesh Roshan. (Recommend Read: Amitabh Bachchan And Abhishek Bachchan Would Be Staying In Hospital For One Week [Reports Inside])

Hrithik Roshan's huge success in Bollywood is often being credited to his Father, Rakesh Roshan. But there are not many people, who know that Hrithik's Father, Rakesh Roshan had given him a deadline of six months to get ready for his debut role. Yes, Rakesh ji had told him that if he's going to be ready in terms of acting, physique, and all other essential requirements then only he's going to take him as a lead actor in Kaho Naa... Pyaar Hai. Guess what? Hrithik had left not just the audience in shock but his Father too with his amazing acting calibre. 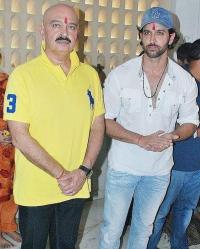 Apart from an amazing actor, Hrithik is also a doting son. On July 14, 2020, the actor's mom, Pinkie Roshan, took to her Instagram handle and posted a collage of father and son when they were at the age of 21. The father-son duo shares an uncanny resemblance. The picture was captioned as "#both pics from when they were 21#blackandwhite #fatherandson #men in my life." Check it out below:

Hrithik considers his Father, Rakesh ji as the best teacher. On the occasion of Teacher's Day, Hrithik had penned a loving note for his Father on his Instagram handle. He had posted a picture and had written, "I have always been a student of Life. The burning desire in me to learn, is as blazing as a toddler. But before I could understand and interpret my many life lessons, it was my Father who taught me. Thank you Papa, for teaching me things that no education institution, no acting classes, no book could. for making me understand and not only see, for pushing me to think before I act. You make me be a better human, Father, son, actor and friend. Thank you for being an example, it is upto you I look, when my children look for their dad. Happy Teacher's day." (Also Read: Aaliya Siddiqui Says Nawazuddin Siddiqui Was Talking To His GF, While She Was Delivering Their Child) 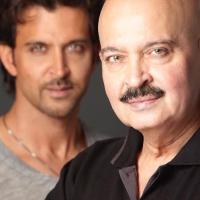 We remember once, Hrithik had shared his father, Rakesh ji's workout video on his Instagram handle. Alongside it, he had written, "Damn! That's My Dad. N.E.V.E.R. G.I.V.E.S. U.P. This is the kind of Resolve and Determination we all need to have to fight in times like these! Ps: He'll be 71 this year and works out 2 hours a day. O and he just survived cancer last year. I think the virus should be afraid of him. Very very afraid." (Don't Miss: Alia Bhatt And Shaheen Bhatt's Mother, Soni Razdan Angry At Instagram For Not Stopping Online Abuse)