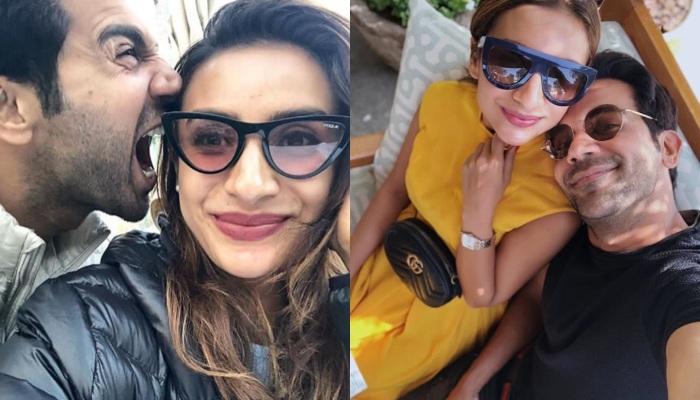 The 'IT' couple of B-town, Rajkummar Rao and Patralekhaa are named amongst the cutest celeb couples for their cute pictures and sizzling chemistry. No doubt, many hearts were shattered when Rajkummar and Paatralekhaa officially announced that they are dating. Nonetheless, they have garnered immense love and respect from their fans for being the loveliest duo. Both of them leave no stone unturned to make each other feel special and loved. (You May Also Like: Angad Bedi Wishes Neha Dhupia On Their First Valentine's Day Post-Marriage And It's Way Too Sweet)

Similarly today, on Valentine's Day February 14, 2019, Patralekhaa took to her official Instagram account and wished her Prince Charming with a lovely picture and even lovelier caption. Patralekhaa wrote, "Hey @rajkummar_rao,we celebrate love and life everyday..But just a shout out to you #Happyvalentinesday". Here's the picture:

Not just her, even Rajkummar shared a lovely Valentine's post for his darling Patralekhaa and penned, "Happy Valentine’s day @patralekhaa. Thank you for being in my life and for making it so beautiful. Here’s to more travel, films, fun, friendship & unlimited & unconditional love". Checkout here:

Talking about his marriage plans in a media interaction, Raj stated, "Not right now. Both of us want to focus on our respective careers, and we’re not thinking about it. Marriage will happen for sure — but I don’t know when." Further, reacting on his and Patralekhaa's rumours, he said, “After a while, you stop reacting to these rumours. We know the truth. As long as we’re happy, we don’t need to tell anyone anything.” And further added, “It will happen when it has to. Right now, we’re happy working. Our families are also waiting patiently; they want us to do good work right now.” (Checkout: Aishwarya Rai Bachchan Posts A Beautiful Family Picture With Abhishek-Aaradhya On Valentine's Day)

February 20, 2017, happens to be Patralekhaa's birthday and wishing the love of his life, Rajkummar had shared a lovely snap on his official social media, Along with the picture, he wrote, “Happy birthday @patralekhaa .May this be the best one ever and you get all the success, happiness and love. You are the shining armour and here is to all the amazing days ahead. God Bless You, God's favourite child.” And on February 20, 2018, he wrote,  “Happy Birthday to the most gorgeous girl Patralekha. Here’s to more love, peace, fun, travel and happiness. More power. Biggest hug and all my love.”

Some time back, Patralekhaa shared her and Rajkummar's love story with the Humans of Bombay. She started off with, “I saw him for the first time in LSD. I thought the weird guy he played was actually what he was like. My perception of him was tarnished! He told me later, that he first saw me in an ad & thought, ‘I’m going to marry her.’ It was so ironic! Once we began working together–it was magic. The kind of passion he had was powerful & I couldn’t respect him any more than I did then! We spoke about our work, love for cinema, passions… I saw him through his struggles, never giving up. How could we not fall for each other? We didn’t officially go on dates, but we’d go for drives, movies, or just sit at home. We accompanied each other for auditions, just for support. All we needed was that understanding”. (Also Read: Anita Hassanandani's Hubby, Rohit Reddy Writes A Super-Fun Poem For His 'Honey' On Valentine's Day)

Further added, “He’d often go out of his way for me. Once he was late to see me, so he ran all the way from the airport to Juhu! Not only that, but when we weren’t earning much, he gifted me my favorite bag–it was so expensive! Years later, someone stole it in London! I called him sobbing–for me, it was about the memories. He’d bought it for me when he didn’t have much. Later, at our hotel, the exact same bag was waiting for me. These little things make me realise how lucky I am for him”.

And concluded, “And the best part is, he always says he’s the lucky one. Isn’t that what a relationship needs? To remind each other how grateful we are? He told me once that after I met his mom, she said, ‘I have a feeling she’s the last one I’m meeting.’ She was right–we’ve been together for 8 years. We’re equals–when an article said, ‘Rajkumar with his girlfriend, Patralekhaa’, he retweeted–‘Patralekhaa with her boyfriend Raj Kummar.’ I can tell you this, when you find the one–through the fights, hurdles & chaos, you should never forget to let them know you love them. It doesn’t have to be with expensive gifts & dates–it can simply be with the way you hold them while they need it & when they don’t. For us, we don’t know what the future holds, but this, being together, is enough”. (Do Check: Ridhi Dogra-Raqesh Bapat, Post Separation Enjoy 'Night Routine' With Pals Sanaya Irani, Mohit Sehgal)

Revealing about their families and their view on the marriage, Raj shared, “Patralekhaa and I have been together for more than six years now, and we are very happy with each other. Even if we get married, we will be happy. I know so many people who are not married, but they are living together, and they are happy. So, it’s not like both of us don’t think about marriage, but we don’t stress about it. I know that eventually, it will happen as our families would want us to get married, though they have never pressurised us.”

Here's wishing Patralekhaa and Rajkummar a very happy Valentine's Day. Please share with us your dinner date pictures, if at all it's happening!