Parth Samthaan's Playdate With Niece, Rivaah Is Adorable Beyond Words, Says 'Her Smile Says It All'

Parth Samthaan's Playdate With Niece, Rivaah Is Adorable Beyond Words, Says 'Her Smile Says It All'

Parth Samthaan yet again provided a treat for our eyes by posting pictures from his happy-happy playdate with his niece, Rivaah. Checkout the pictures and drool! 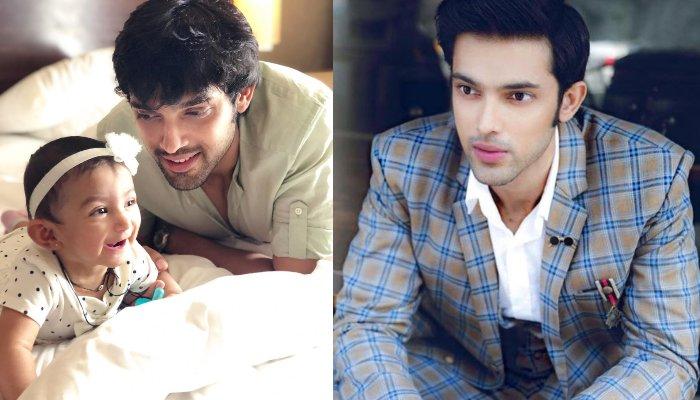 Who doesn’t love babies? Babies are the most innocent and divine gifts of happiness, bestowed by God. The innocence with which they smile at anything and everything, the way they try to speak in a language known as ‘gibberish’, which is best known to them, how they grasp everything that comes their way to holding your finger with its entire little hands, babies are such a delight! And no one can understand this better than one of the most famous telly town faces, Parth Samthaan. Why do we say so? Find out! (Do Read: Soha Ali Khan Reveals Her Daughter, Inaaya Naumi Kemmu Is Crazy About Lipsticks)

It was on February 2019, when Parth Samthaan had taken to Instagram and posted a picture with his adorable little munchkin, his niece, cuddled in his arms. With his then one-month-old niece in his arms, a happy ‘mamu’ Parth, was seen looking lovingly at her in one picture and kissing her in the next. He had captioned the pictures as “And there she is... already 1-month-old #niece see you soon.” And then came his co-star and rumoured ladylove, Erica Fernandes’ which had said, “Please don’t eat her!” followed by a kiss emoji.

We totally need to thank Parth Samthaan yet again for the 28-year-old provided a treat to our eyes, by posting pictures from his happy-happy playdate with his niece, Rivaah. In the images posted by Parth, he was seen looking adorably at the baby beauty, as she looked all-happy as she smiled with her mamu. While Parth sported a shirt for his playdate, his niece looked adorable beyond words in a polka-dotted dress with a white bow-band on her head! Sharing the picture, Parth wrote, “When her Smile says it all #rivaah #niece #family.”

Raksha Bandhan is one of the most important festivals celebrated pan India. It is a day of holiday and happiness and our favourite telly star, Parth Samthaan too, had a gala time. He took to Instagram and posted pictures and videos from his rakhi celebrations. Out of the many picture and videos posted by him, there was one that had particularly caught our fancy in which, Parth was seen giving bouts of ‘fishy kisses’ to his little niece, who couldn’t seem to get enough of him too! Sharing the video, the Kasautii Zindagii Kay 2 star had written, “She just lovessssss my fishy kisses Happiest kid I have ever met Welcome to our family - Rivaah #niece #pune #family.” He further wrote, “I can see this video again n again n again”, as one of his comments. Take a look at the same here:

While Parth Samthaan largely came to fame with Kaisi Yeh Yaariaan, but it is his current Kasautii Zindagii Kay 2 stance as Anurag Basu in the same show that is helping him win tumults of accolades. It is through the same show that Parth met his ‘rumoured’ ladylove, Erica Jennifer Fernandes and are reportedly dating one another. Speaking about Erica, Parth had stated sometime back in an interview, “I remember meeting Erica for the first time on the set. We hit it off right away. Erica and I are around the same age so, it was really easy to get along with her. She is an amazing person and we have a lot of fun in between shots. She is an experienced actress and is multi-talented so I get to learn a lot from her. It's great that our off-screen friendship is translating really well on-screen and viewers are enjoying our on-screen chemistry.” (Must Read: Sameera Reddy Shares Cute Pictures Of Her Baby Girl, Nyra, Reveals How She Is Celebrating Every Day)

Sometime back, The Tribune had quoted a source as saying, “Parth and Erica have been inseparable and are always together. They both arrive on the set together and wait for each other’s pack-up to leave together. They are very fond of each other and clicked since the day they met. Parth is always in Erica’s make-up room and they find their way to each other even in between shots. Parth also went to meet Erica’s family and they seem to adore him.”

While we all had been waiting to let the truth out of the horse’s mouth, Erica Fernandes, in an interview with the Hindustan Times had shunned all dating rumours and had blurted out the truth. She was quoted as saying, “It is news to me that such rumours are out there. But, I guess, rumours are a part and parcel of the entertainment industry. I have known Parth since we started working together on our TV show and we shoot every day. We are good friends and have a great working relationship. Whenever we chill together, we have a whole bunch of people with us. When we go for events, we are often leaving from our set, so yes, we do leave together. That doesn’t mean we go home together. In fact, we live in different parts of the city.” (Also Read: Karanvir Bohra's Daughters, Vienna And Bella Share A Cute Birthday Wish For Their 'Daddy')

But as they say, pictures don’t lie! Isn’t it folks?