Marriage is one of the most important decisions in everyone’s life. Not just the girl, but the life of a man too changes and takes a 360-degree turn altogether. But when you know that your partner is the one for whom you have been waiting, you don’t give a second thought to the commitment and instantly decide on forever. And then begins you ‘happily ever after’ kind of a love chronicle! And exactly the same happened when Bengali actress-turned-politician, Nusrat Jahan recently got married.

Nusrat tied the knot with her longtime beau and Kolkata-based business tycoon, Nikhil Jain. The couple had a close-knit ceremony with just their families in the attendance at the Six Senses Kaplankaya in Bordrum, Turkey. The couple had two wedding ceremonies, a Hindu wedding and a white wedding, the pictures of the weddings both have gone viral on the internet. (You May Also Like: Amy Jackson Gives Closer Look Of Her Baby Bump From Gym, Also Reveals Her Morning Cravings)

Nusrat Jahan Shares A Cute Photo Of Son, Yishaan Dressed As Santa, His Cuteness Is Unmissable

Newbie Mommy, Nusrat Jahan Takes A Dig At Trolls For Criticising Her With A Post After Her Delivery

Nusrat Jahan Gets Discharged After Delivery, Rumoured BF Yash Dasgupta Carries The Child In His Arms Nusrat’s hubby, Nikhil took to his official Instagram handle and shared a couple of pictures from their wedding. Along with one, he had written, “Taking the final leap @nusratchirps #thenjaffair.” The caption of the other post could be read as, “Love will keep us alive! Thank you for making my life complete #thenjaffair @nusratchirps.” And the third one goes like this, “You give me strength to stand tall in front of the whole world! #thenjaffair @nusratchirps pic courtesy @knottingbells.” Checkout the pictures here: 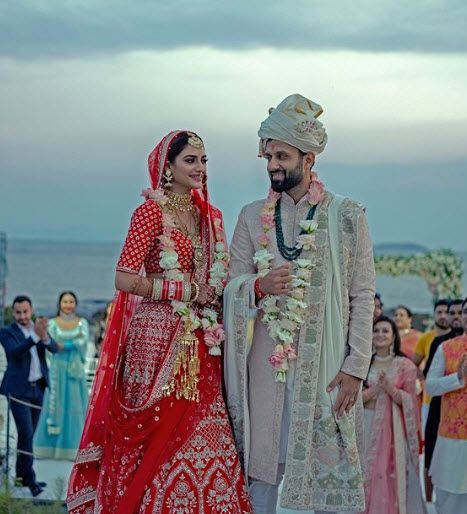 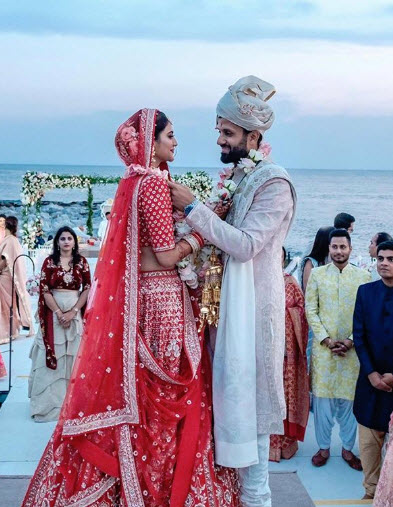 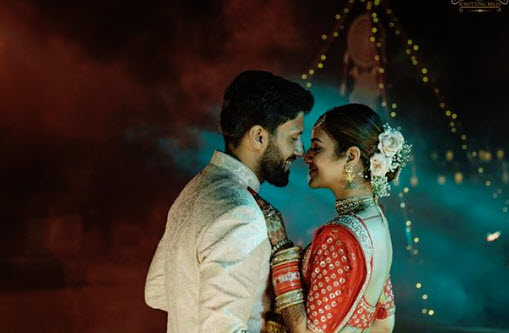 Now, the couple’s official photographers, Knotting Bells have shared the newlyweds, Nusrat and Nikhil’s wedding teaser. It is in literal sense a teaser wherein our excitement is poked. In the video, we can see the entry of the bride, Nusrat under the phoolon ki chaadar, which her brothers are holding. Adding to the aura of the entire well-made video is the song, Laal Ishq, playing in the background. Checkout the teaser right here:

On May 27, 2019, Nikhil had taken to his official Instagram handle and shared a lovely picture of Nusrat holding her hand from behind the lens. Being all-praises for his ladylove, he had captioned the post as, “You know the meaning of love, when you crave to grow old with that one person; go all chips in for that one person; rediscover your own self being with that person, and be the partner you’d never thought you’d be . Thank you @nusratchirps for making my life the most beautiful one, u made me worthy! It was definitely worth the wait- Destiny! Raabta!” (Also Read: Kareena Kapoor Khan And Karisma Kapoor Twin In Black As They Party With Saif Ali Khan In Nawab Style) 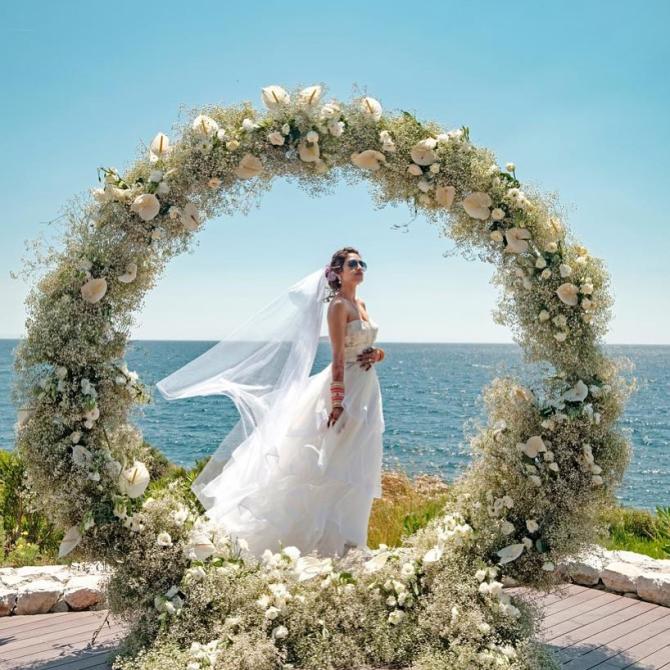 On Father’s Day 2019 (on June 15), Nusrat had taken to her Instagram to wish her father. Sharing a lovely picture from one of her haldi functions, she had written, “U taught me humanity. Took each n every care of my happiness. I will never let you and your principles down. I love u Daddy. May all daughters get a father like u. Happy Father’s Day!!” 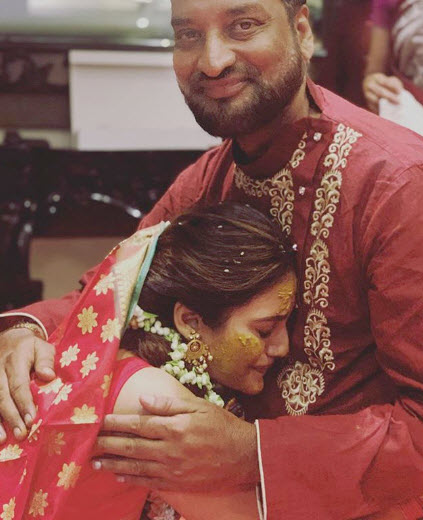 For those who don't know, Nusrat Jahan was earlier dating Kadir Khan, who was accused in the most sensational rape case. Talking to The Times of India, Nusrat had remarked, "We met through friends in college and it took three-four months to utter those three words. And when we thought of taking the relationship forward, we broke the news to both our families. They approved of the match. Kadir is one of the most disciplined guys I've come across. He is not the mushy-mushy types, but he will make sure his love gets the things she wants, even at 2 am. He is a one-woman man. I never saw him flirting or dancing with any girl at a party. His phone had only my pictures and I never saw any girl calling him." (Checkout: Arjun Rampal's Heartfelt Birthday Wish For 'His Smile', Myra Rampal Is Every Daddy-Princess Ever) 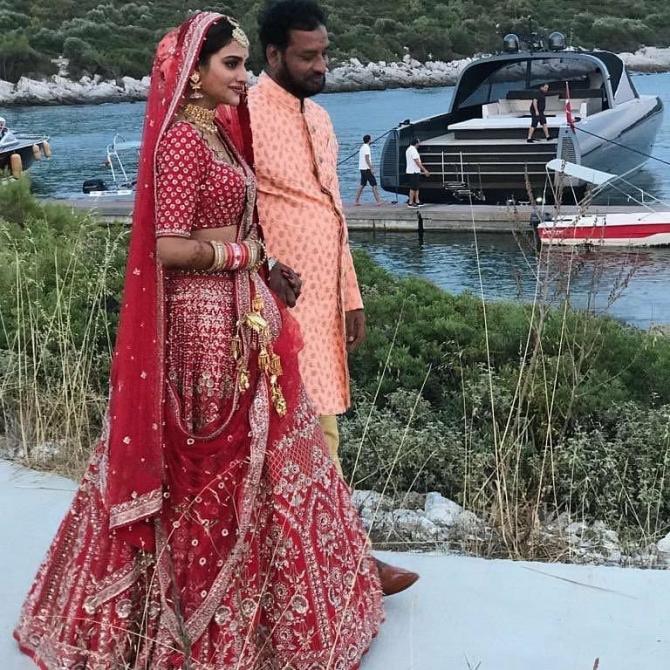 She had further gone on to add, "He was the guy who would be beside me whenever I needed him... (After a pause) Kadir is extremely possessive about me. So, at first, he didn't like my profession. He used to say I don't like the whole world watching you and yearning for you. I made him understand. Then, he was okay about it. In fact, when I used to see pretty girls becoming his friends on Facebook, I was not jealous. I used to tell him, "kya baat, all good-looking girls are becoming your friends. Proud of you." He too was confident about me." Congratulations to the newlyweds once again! Wishing Nusrat and Nikhil a happy and love-filled life! 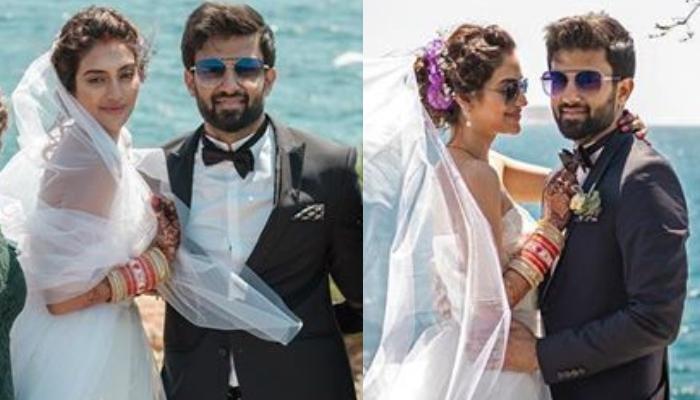 Bengali actress turned politician, Nusrat Jahan had made headlines about the news of her marriage with Kolkata based businessman, Nikhil Jain. And while we were gushing over her Hindu wedding pictures, she took our heart away with her white wedding. (Recommend Read: 'Nach Baliye 9' Contestants List Of Ex-Couples And Couples

Nusrat Jahan Shares A Cute Photo Of Son, Yishaan Dressed As Santa, His Cuteness Is Unmissable