Niti Taylor Gets Engaged To Beau, Parikshit Bawa, Dazzles In An Ice-Blue Lehenga With Cape Sleeves

Niti Taylor Gets Engaged To Beau, Parikshit Bawa, Dazzles In An Ice-Blue Lehenga With Cape Sleeves

Finally, the cutest telly town actress, Niti Taylor gets engaged to the man of her life, Parikshit Bawa. Scroll down as she gives brides-to-be a fashion inspiration on how to rock an ice-blue lehenga! 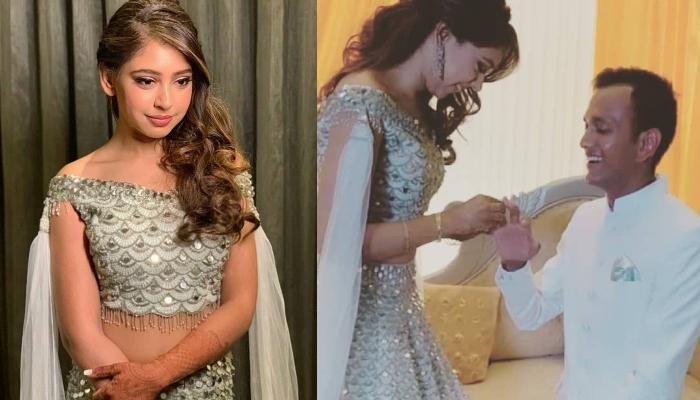 The world of glam and glitz is abuzz with wedding bells. And the recent one to join the 'shaadi' brigade is television's cutest actress, Niti Taylor, who had introduced the 'man of her life', Parikshit Bawa on August 12, 2019. (Recommend Read: Shweta Tiwari's Ex, Raja Chaudhary Talks About Palak's Bold Step Of Writing An Open Letter)

Niti had made her television debut with Pyaar Ka Bandhan in 2009, and since then she has been making headlines with her different roles. She has gained a huge fan following and fan pages that follow her religiously. While some hearts were broken, some rejoiced with happiness to finally see the man who took her heart away.

On August 13, 2019, Niti and Parikshit exchanged the rings in a grand ceremony. The actress gave us pre-bridal goals as she donned an ice-blue lehenga with tassel detailing on the hem of the blouse and cape style sleeves. She kept her ensemble classy yet striking with half-parted curls. On the other hand, her fiance, Parikshit complemented her in a white traditional sherwani. Take a look at the pictures below:

Coming back to Niti's wedding announcement, the actress had taken to Instagram and had shared a cutesy picture with her beau, Parikshit. Along with it, she had written, "We decided on FOREVER On the eve of beginning my life's most beautiful moment, I feel all the love and happiness there possibly can be. It only feels complete after letting you all know. I've had your love and support since the past decade and with great happiness, I'd like to inform everyone that I'm getting ENGAGED! We would like to share this moment with you all and seek your blessings and good wishes for this new innings in our lives." (Also Read: Shloka Mehta And Radhika Merchant Bonding Together Gives A Glimpse Of Their Jethani-Devrani Relation)

A couple of days ago, Niti had denied her wedding rumours in an interview with TellyChakkar. She had shared, "No, I am not getting married. I am on a family vacation and the news about me tying a knot is incorrect."

For those who don't remember, Niti Taylor had made headlines for her relationship with her Kaisi Yeh Yaariaan co-star, Parth Samthaan. In a 2018 interview, she had talked about her equation with Parth, and had shared, "In these years, we have (Parth Samthaan and I) matured as actors. I have grown as a person. I was a different person when I started the show. The scenes turned out to be better than expected. It was very natural and nothing over-dramatic. While when we shoot for TV, they need a little more drama. But over here, it was more real." 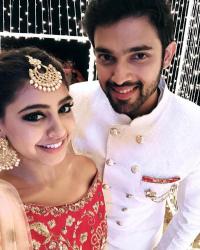 In a throwback interview with the Hindustan Times, Niti had talked about throwing tantrums. She had said, "I am the last one to throw tantrums; you can ask everyone on the set. When people learnt that I would no longer be a part of the show, many co-actors told me that they were sad and didn’t want me to leave. I am sure I have affected a lot of people’s lives, as I spread happiness wherever I go. Negative things do happen, but once you meet me, you would know they [the rumours] are not real (laughs).” (Don't Miss:Kartik Aryan Celebrates His Princess Sara Ali Khan's Birthday In Bangkok, Amrita Singh Joins Too)

Well, we cannot wait to see more pictures of Niti's engagement! What about you?