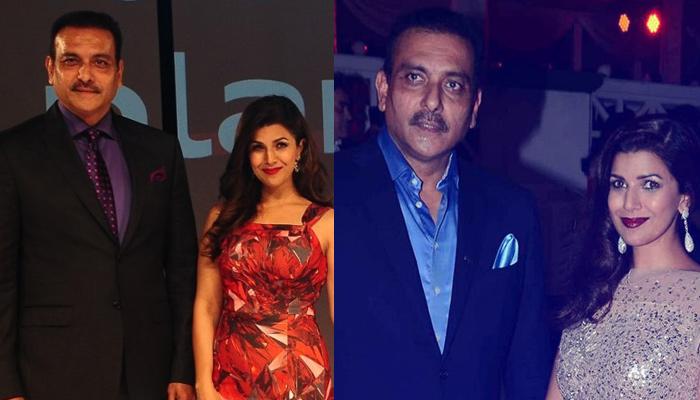 Some relationships in Bollywood become quite evident with the due course of time, thanks to their public appearances and constant media attention on their every move. But there are some relationships which remains hidden like a lava inside a volcano and when it erupts (read emerges), it sweeps the entire nation like how! (Do Read: Shibani Dandekar Shares Pic With Farhan Akhtar Walking Hand-In-Hand, Are They Making It Official?)

Why such an intro? We have a news for you in here which is bound to make you ask, “Say what!” Yes, remember the beautiful maiden and a powerhouse of talent who played Akshay Kumar’s muse in Airlift, Nimrat Kaur? And former player of Indian cricket team and now coach of the same, the dapper Ravi Shastri? As per a Mumbai Mirror report, the celebs have been in a relationship for over two years now and have successfully managed to keep their affinity under wraps and how!

Did this surprise you? We are sure it did! Although, Nimrat hasn’t been in the news for her linkup or dating rumours, Ravi has always made headlines due to his profession and errr… relationship rumours. Way back in 1986, Ravi made headlines due to his affair with one of the leading actresses then, Saif Ali Khan’s ex-wife, Amrita Singh. The duo was then spotted at a New York restaurant and apparently, Ravi had also slide a ring on Amrita’s finger. Speaking about getting married to an actress, Ravi had then shared, “I definitely don't want an actress wife. I am chauvinistic. Her home should be her first priority.” (Also Read: Sushant Singh's Over-Friendliness Made Co-Star Sanjana Sanghi Uneasy, She Stopped Shooting?)

Seems like Ravi worked a lot on his mindset and thinking! The couple was roped in to be present at new Audi TT Coupe in 2015 and we guess that is when the couple’s professional relationship might have prospered to a personal one. It is also reported that Ravi is ‘bowled over’ by Nimrat’s beauty! Nimrat, in one of her earlier interviews with Hindustan Times had shared that she is open to dating. She had revealed, “I am single and if tomorrow someone asks me out and I am interested, I will be open to it. Having said that, I am not chasing a relationship. My work is keeping me busy.”

Well, looks like Nimrat has finally found her 'one'! In a 2016 interview with The Times of India, Nimrat spoke about love and relationships and stated, “I think love and relationships need tolerance. It’s easy to fall in love and have great sexual chemistry with someone. It’s exciting to discover each other. Then what? How does one make it last? Our parents and grandparents lasted for 50, 60 years together. Why can’t we have that kind of a relationship? Love needs patience. One requires to be a forgiving person. It’s easy to give up on people. We are in the habit of giving up on anything that needs hard work. We need to hold on to love and make it work for a lifetime.” (Don't Miss! Arbaaz Khan To Marry Girlfriend Giorgia Andriani Inspite Of Family's Disapproval?)

Few years back, Ravi was also in the news due to divorce with his wife Ritu after 22 years of marital bliss. The ex-couple has a 10-year-old daughter, Aleka Shastri. On account of their divorce, Ritu’s mother had spoken to the media about one of the possible reasons for their separation. She had then shared, “Ravi had a huge fan following which majorly constituted women.”

Looks like now, the rumoured couple has finally found love in each other and we hope that the duo make it official soon. Also, what’s your reaction on this piece of news? Let us know in the comments section below.