Nick Jonas And Priyanka Chopra Jonas' Love Is For Keeps, His Lovely Gesture At His Concert Proves It

Nick Jonas And Priyanka Chopra Jonas' Love Is For Keeps, His Lovely Gesture At His Concert Proves It

Priyanka Chopra Jonas and Nick Jonas married in December 2018. Ever since, they have been giving major marital goals. Lately, Nick's heartfelt gesture for Priyanka made their fans go gaga over them. If she has won Miss World pageant in the year 2000 at the mere age of 19, he is touted amongst the most successful singing sensations who has crooned his voice for many blockbusters, starting his career when he was just 12. Little did these two know that they would end up being together and would walk down the aisle, hand-in-hand! By now, you might have guessed who we are mentioning! Yes, the couple in question is Priyanka Chopra Jonas and her fella, Nick Jonas.

Priyanka is fully living her spousehood with her inamorato, Nick. Both of them know how to keep reinforcing the feeling of love and keep the spark of a relationship alive, thereby, bringing long-term happiness into a relationship. The reason why we are saying so is because PeeCee makes sure to give the loudest cheer for his prince charming during his concerts. On the other hand, Nick knows how to regard her love in the sweetest way possible. (You May Like: Amy Jackson Looked Stunning On Her Baby Shower In A Pale Turquoise Bodycon Dress, Pics Inside)

Currently, the American pop singer, Nick Jonas is on his much-awaited ‘Happiness Begins’ tour with his partners in crime, Joe Jonas and Kevin Jonas. Guess who was at the concert to make it a night to remember? It was Nick’s beautiful wifey, Priyanka! But it was not like any other concert of the bro trio for one of the sweetest gestures of Nick grabbed all the limelight. During the concert, which took place in Boston, Nick said, ‘I Love You’ in the midst of the show using sign language. Take a gander here:

This heartfelt gesture of Nick for his ladylove made all their fans go gaga over them. One of their fans wrote, “Ok, I'm done, Nick telling "I love you" to Pri in sign language is the cutest thing, since the concert a few months ago I've been waiting for this (the third pic is only reference of her position, I don't know in which moment was taken that pic).” Other swooned over the gesture by writing, “Just love. God, please protect them at all cost.” Another wrote, “Aww this is so cute (he’s doing I love you in sign language).” Checkout the snapshots here:

If you guys think this is the first time that Nick has done something special like this for Priyanka, then you are totally wrong! In April 2019, Nick had performed in Atlanta and he had professed his love for his sweetheart on stage during his then on-going performance. He had said, ‘I Love You’ to her and she was all shouting, grooving and cheering for him. In case you missed the video that we had shared with you at that time, no worries, take a look at it here:

As much as Priyanka and Nick have been loved by their fans, they have also become the target of hatred. So much so, that their divorce rumours spread like wildfire after a couple of months of their marriage. Ok! magazine had once quoted a source as saying that Nickyanka have been fighting about everything and that their divorce would be a major money battle. In the words of the source, “They’ve been fighting about everything – work, partying, spending time together. The bottom line is that Nick and Priyanka rushed into things and now they’re paying the price. Their marriage is hanging by a thread.” (Also Read: Kundali Bhagya's Ruhi Chaturvedi Gets Engaged To Chhoti Sardaarrni's Shivendraa Saainiyol [PICS])

Not just this, the source had also revealed that the Jonas family was begging to Priyanka to end the marriage for they had thought she is not mature enough to have kids. More so, it was reported that Priyanka was having temper issues, which was not going down well with the singer. The source had further remarked, “Nick’s seen a controlling side to her. She also has a temper – that’s something Nick wasn’t aware of until after the wedding celebrations.”

Such uncalled-for speculations keep hovering over the lives of our favourite celebrities, and they know how to dodge them. Priyanka too had reacted simply to the rumours and said, “I don’t even want to react or comment. It’s not even in my stratosphere. I’m in a happy place at this moment. This kind of random things can’t disturb it.”

Priyanka Chopra’s mother, Madhu Chopra too had countered the baseless news and had shared, “It is a happy phase for our family, and we don't want to be disturbed by such idiotic things. I am happy that my daughter is married to someone she truly loves. I don't want to give publicity to those fools. There are some donkeys who do anything they feel like, but their actions don't affect us.” (Checkout: Chhavi Mittal Opens Up About Her Experience Of Breastfeeding In Public)

Nick and Priyanka are truly made for each other and their marriage is for keeps! We loved this heartfelt gesture by Nick, what about you? 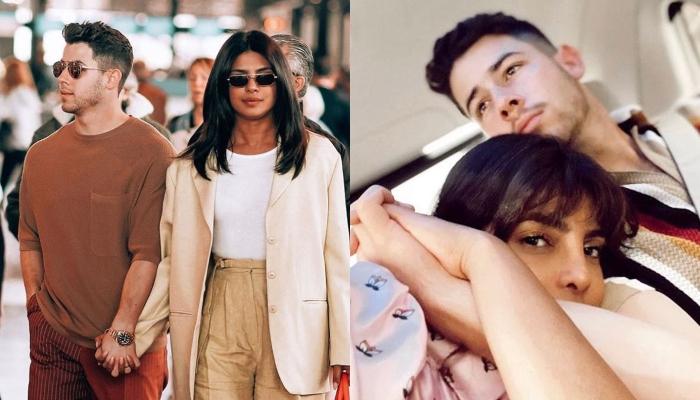