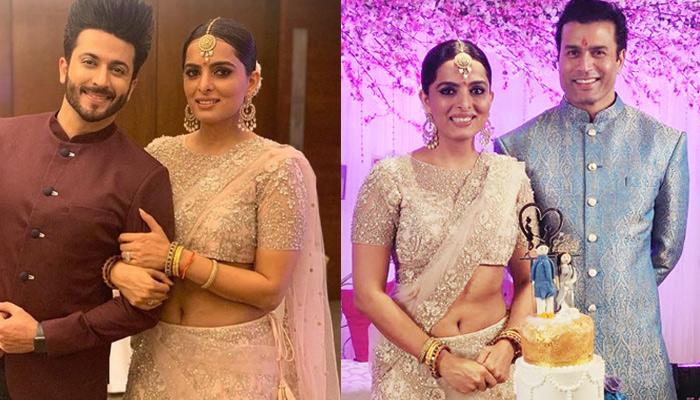 Opposites attract and you would be surprised to know how much you can have things in common with the person who is completely different from you! And that’s what applies in real-life also when two people meet and fall for each other! Kundali Bhagya actress, Ruhi Chaturvedi and Chhoti Sardaarrni actor, Shivendraa Om Saainiyol’s love chronicle falls into the same category. Ruhi and Shivendraa are poles apart as he is introvert and she is vivacious, but Cupid struck them and thus, they have decided on forever.

News regarding Ruhi and Shivendraa’s engagement has been making it to the headlines since quite sometime. It all started when a source close to the couple had once shared with an online tabloid that they have been good friends and so their families have decided them to get married. (Also Read: Amy Jackson Looked Stunning On Her Baby Shower In A Pale Turquoise Bodycon Dress, Pics Inside)

It was on August 17, 2019, when Ruhi and Shivendraa exchanged the rings officially in the presence of their friends and family. Ruhi flaunted her all-gold look in a lovely shimmery lehenga, which she teamed up with exquisite jewellery, keeping her hair tied in a neat bun. On the other hand, Shivendraa looked dapper as usual in his powder-blue bandhgala having submissive golden work on it. Television actress, Anjum Fakih took to her official Instagram handle and shared a few clicks from the engagement ceremony, captioning the same as “Congratulations @ruhiiiiiiiiii @shivendraa_om_saainiyol sagai ki bohot bohot badhayiyan Mubarakbaad. Dono ki Jodi aise hi bani rahe. Love you both.” Take a look at the pictures from the engagement:

Confirming her engagement news with Shivendraa, Ruhi had shared with Lehren, "We wanted to keep the news private, but I don't how it got leaked out. Our story is very filmy. Our fathers have been friends for so many years now and they thought kyun na iss dosti ko rishtedaari mein badal de (let's culminate friendship into marriage). We have practically seen each other growing up and even know each other's secrets. The engagement is going to happen next month on August 17. I have invited my Kundali Bhagya team for the engagement ceremony." (Checkout: Niti Taylor's Epic Dance Moves With Her Girl Tribe On Her Engagement Ceremony Stole The Show [VIDEO])

In a joint interview with The Times of India, Ruhi and Shivendraa had revealed the details of their love tale. Ruhi had revealed, "Shivendraa and I have been friends for 13 years, but the thought of marrying each other never crossed our minds till our families suggested it. My father met his father and things fell into place. So, despite knowing each other for so long, we are getting into an arranged marriage (smiles)." To this, Shivendraa had added, "Our families thought that we would be perfect for each other. And I believe that parents know what is best for their children."

Adding on to this even further, Ruhi was quoted as saying, "I had a major crush on him when I had just met him. However, we fell madly in love after our parents decided to get us married. He is totally unlike me — calm, level-headed and simple. That’s what I like the best about him." On the other hand, Shivendraa could not stop praising his soon-to-be-Mrs, and had retorted, "I fell in love with Ruhi because she is an adventurous person. She is also humble and fun to be with. Most importantly, I know that she will hold my hand through thick and thin." (Do Read: Tere Sheher Mein's Hiba Nawab Clarifies Her Relationship Status With Qubool Hai's Rohan Gandotra)

Congratulations Ruhi Chaturvedi and Shivendraa Om Saainiyol on your engagement!