Rohanpreet Singh shared an adorable picture with his ladylove, Neha Kakkar from “Nehudavyah”. Look like a match-made-in-heaven. 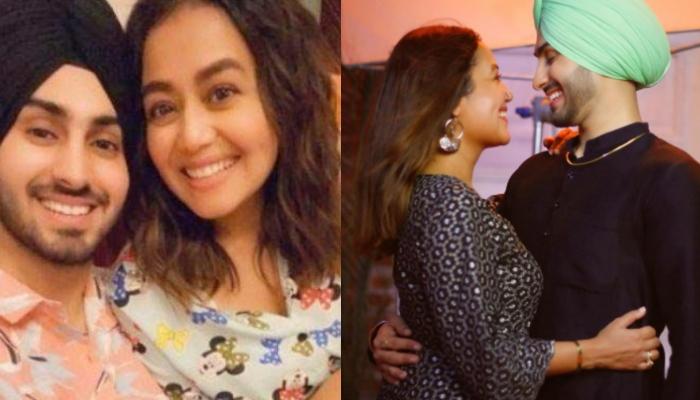 While we were thinking that the year 2020 is the saddest one, suddenly it showered some happy announcements from the glamour world. From lockdown weddings to pregnancy announcements, we are getting beautiful surprises every day. And the recent surprise had come from singer, Neha Kakkar as she is all set to tie the knot with her beau, Rohanpret Singh. The speculations about the two had begun when Neha had posted a line from one of her songs with Rohanpreet, “Aaja chal viyah karwaiye lockdown vich katt hone kharche” on her IG stories. (Also Read: Esha Deol Shares A Glimpse Of Hema Malini's Birthday Celebration, Her Charming Smile Is Unmissable)

On October 10, Neha Kakkar had announced her relationship status with Rohanpreet Singh. Taking to her Instagram handle, she had posted a cute picture with Rohanpreet. The duo was looking super cute as they had twinned in black. Alongside the picture, Neha had written, "You’re Mine @rohanpreetsingh #NehuPreet." Rohanpreet had also shared the same picture, and had written, "Meet My Zindagi! #NehuPreet". Since then, Neha and Rohanpreet have been treating their fans with their adorable pictures.

Ever since Neha had announced her relationship status with Rohanpreet, their fans have been eagerly waiting to get more details of the same. On October 17, 2020, Rohanpreet took to his IG handle and shared a gorgeous picture with Neha. In the picture, Neha looked ethereal in a baby pink gown and Rohanpreet complemented her in a black suit with a pink turban twinning with his ladylove. Looking like made-for-each-other, Rohanpreet captioned the picture as “We Look Good Together!!!!! Don’t we? Touchwood. Meet #NehuPreet from #NehuDaVyah. @nehakakkar Babuuuuu.”

According to reports by ABP Ganga, it has been revealed that the wedding of Neha Kakkar and her beau, Rohanpreet Singh is going to be held on October 24, 2020, in Delhi. All the relatives and friends are invited and requested to be present in Delhi by October 21. On October 16, 2020, Neha had taken to her IG handle and had shared and adorable picture with Rohanpreet. In the picture, the two had wrapped their arms around each other and couldn’t take their eyes off while flashing their bright smiles. Neha had captioned the picture as "Jab we met! @rohanpreetsingh #LoveAtFirstSight #NehuDaVyah #NehuPreet.” On Neha’s post, Rohanpreet had commented, "Oye Tu Meri Hai, Sirf Meri!! Love You the most @nehakakkar #NehuPreet #NehuDaVyah." (Also Read: Bigg Boss 14: Sidharth Shukla Reveals He Used To Steal Money From Dad's Wallet During College Days)

A few days ago, on October 11, 2020, Neha had taken to her Instagram handle and had posted a couple of pictures. In the pictures, we could see her donning a red suit, and her look was completed with a pair of junk jewellery. Alongside the photo, Neha had written, "Aaja Chal Vyah Karwaiye LockDown Wich Katt Hone Kharche. This is my favourite line from #DiamondDaChalla. song #NehuDaVyah." However, it was her beau, Rohanpreet's comment that had won our hearts. He had instantly commented, "Chalo, Chalo, karwaiye vyah."

Amidst the speculations on their wedding, a picture of Neha Kakkar and Rohanpreet Singh had emerged on social media. In the picture, Neha and Rohanpreet had posed with his parents and a basket of gifts on the lap of the rumoured bride-to-be, who is sitting holding her beau’s hands, had hinted that it might be from their roka ceremony. On October 7, 2020, Rohanpreet had shared an IG story to congratulate Neha and her brother, Tony Kakkar for 1 billion views on their song, Mile Ho Tum. Showering praises on the brother-sister duo, Rohanpreet had called Neha, his zindagi. (Also Read: Namrata Shirodkar Shares An Adorable Picture Of Her Baby Girl, Sitara, Calls Her A Little Cub)

Are you excited for Nehu Da Vyah? Let us know. There's a saying that goes 'If there's paradise somewhere on this earth, it is in the feet of your parents'. Doesn't matter how negative your day is going, how demotivated or pessimistic you feel, your parents have a way of making you get rid of all those negative feelings. Just