On February 6, 2020, Angad Bedi turned a year older and his darling wife, Neha Dhupia treated her husband with a lovely wish for him, sealed with a peck on his cheeks on his birthday. 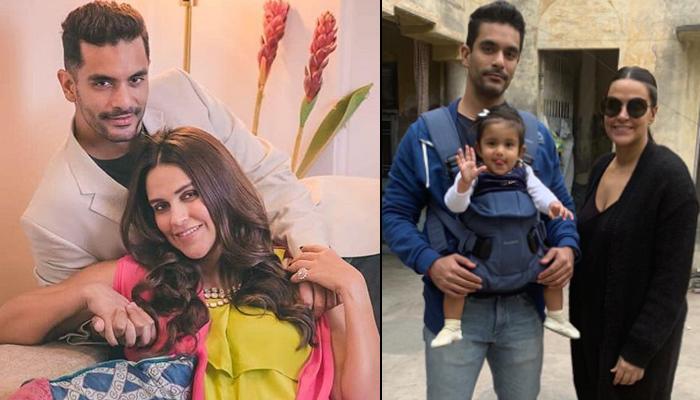 In a country where every boy dreams of becoming a cricketer and practices the sudden run-up to bowl with an imaginary ball since childhood, son of the former national spinner, Bishan Singh Bedi, Angad Bedi had different plans. Post playing the under-19 level for Delhi, Angad ventured into modelling and acting. It was with Pink in 2016 when Angad garnered the desired fame for which he had worked for and it increased with his stint in Inside Edge as Arvind Vashishthh. (Also Read: Gauri Khan Overshadows Shah Rukh Khan As They Groove On Saadi Gali At Armaan And Anissa's Reception)

By now we have established the fact that we love the big-fat celeb weddings as it is a star-studded affair with larger-than-life decor and the exhibit of the best fashion. But there’s something else we love more than a big-fat celeb wedding. Wondering what it is? Well, a surprise B-town wedding! And it was Neha Dhupia and Angad Bedi’s secret Gurudwara wedding, that had made us realise how much we love such surprises. Even the B-town had no clue about Neha and Angad’s wedding, and their marriage announcement with the first-ever picture as husband and wife had taken the internet by storm.

Just how this awesome twosome had nonchalantly let the world know about their change in relationship status, from being lovers to husband and wife, they often treat us with some adorable captions and pictures through their social media profiles. On February 6, 2020, Angad Bedi turned a year older and his darling wife, Neha Dhupia treated her husband with a kiss on his birthday. Neha wrote, “#happybirthday to the love of my life... how is it even possible to love you more and more each day... but I do, I really do! here’s wishing that I wake up to your kisses everyday and you wake up to mine, except when you have an early call time.”

In an interview with Etimes, Angad Bedi revealed how it will be a working 37th birthday for him but will take out time to spend with family. Elaborating on the same, Angad stated, “I have an event tomorrow in Delhi. I will be spending some time with my family and then attend the event. It will be a working birthday for me and I feel when you are working on your birthday, you work throughout the year. I really value that. For me, work is literally worship.” (Also Read: Divyanka Tripathi Flirts With Hubby, Vivek Dahiya And Asks, 'Aata Kya Khandala?', His Reply Is Epic)

Revealing how his birthday celebrations in Delhi will be the first time for his daughter, Mehr Dhupia Bedi as she’ll meet his and Neha Dhupia’s families. Angad Bedi continued, “Neha and Mehr are here and both sides of our families are also here. We will all catch up have meal together and celebrate. For Mehr, it is going to be the first to meet both sides of the families. These are very important moments for our child which we want to capture and cherish in the best way possible.”

While wedding dates are a ‘must remember’ event for a couple and as clichéd as it gets, it is generally the ‘mister’ who forgets it, but what looks like, this time it is the other way around! In a clip of a chat session on The Love Laugh Live Show on Romedy Now, Neha Dhupia had forgotten her and Angad Bedi’s wedding month! Angad, posting a clip of the same on his Instagram handle, had written, “Saadi janaani da koi haal nahi sachi!!! Love my wife... she remembers the wedding date so well teh je main bhulya hounda na... Dasso ki ki hona si!!!!” Neha, clarifying the same, had commented, “10th May!!!!!!!! @angadbedi may I please clarify.”

In the same interview with Etimes, Angad Bedi poured his heart out on how far the experience has been for him as a married man. Angad remarked, “It has been a very beautiful experience. I feel I should have done this much earlier if it was possible. Whenever you both are ready I think the universe does conspire. I think that’s what has happened in our case as well. We come from a similar background, we both speak Punjabi. Our parents are based in Delhi. Neha’s father was from the naval background and my father played cricket. We are self-made children coming from self-made families. The value system is the same.”

Elaborating on how marrying a person from the same field has its share of advantages and disadvantages, Angad Bedi continued, “Neha understands the business. She understands in and out of an actor’s life. She is my friend first and so I can speak to her very openly. I don’t need to mince my words or think twice before saying what I need to say.” (Also Read: Sakshi Dhoni Shares Hubby, Mahendra Singh Dhoni's 'Sweetie On Duty' Picture From Maldives) Popular Bollywood celebrities, Neha Dhupia and Angad Bedi had surprised everyone when they had posted their stunning wedding pictures on their respective social media handles. The duo had kept their relationship a secret, and no one was able to guess that they were dating. The madly-in-love couple had tied the