Neha Dhupia's 'Hatke' Outfit On Her Mehendi That Is Neither A Lehenga Nor A Gown, Check Full Picture

Neha Dhupia's 'Hatke' Outfit On Her Mehendi That Is Neither A Lehenga Nor A Gown, Check Full Picture Bollywood actress, Neha Dhupia, is well known for her acting skills on celluloid, her beauty and hotness, and also for her talk show BFFs with Vogue. The pretty damsel who is famous for letting B-town celebs spit out their most personal secrets did something contrary to her profession. She kept the most important news of her life under wraps. (Take A Look: Neha Dhupia Ties The Knot With Actor Angad Bedi In A Gurudwara Wedding, Pictures Inside)

It came as a sweet surprise to everybody yesterday when the Ae Dil Hai Mushkil director, Karan Johar, announced it to the whole world that his best friend, Neha Dhupia is officially taken now and that she is now wifey to Bollywood and TV actor, Angad Bedi. Karan took to Twitter and shared the following picture, captioning it, “My darling and most special friend @NehaDhupia who l love and adore dearly is married to the gentleman and talented @Imangadbedi !! Here’s wishing them decades of unconditional love!!!!”. 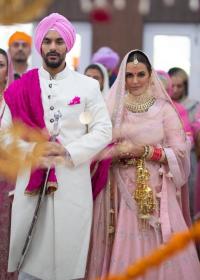 Just like their fans, even the Bollywood celebrities were surprised on hearing the news. We brought to you the story yesterday on how they reacted on social media. Read the full story here.

Now, post-Neha Dhupia’s wedding news, numerous pictures and videos started surfacing online. And one picture, which could make your day is Neha Dhupia’s mehendi ceremony pic. Yes, with a million dollar smile, she is oozing a beauty unmatched. In the pictures, we can see Neha wearing a sweet smile while professionals are intricately applying mehendi on her palm. Dressed in a peacock blue outfit which happens to be a House of Masaba Fish Khadi kaftan, she is surely making the heads turn everywhere. On their official Insta handle, the House of Masaba, wrote, "Gorgeous bride @nehadhupia in a blue Heritage Fish Khadi Kaftan for her mehendi. Here’s wishing her a blissful married life". 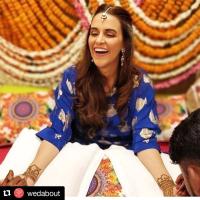 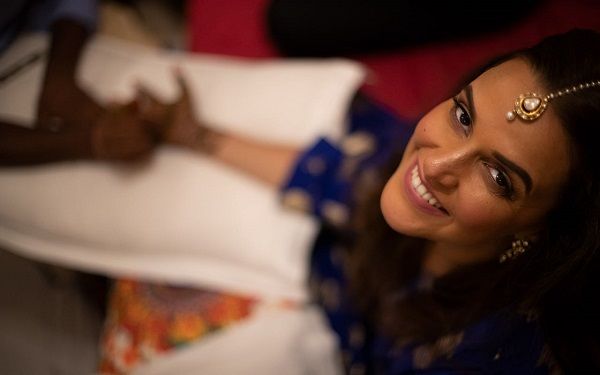 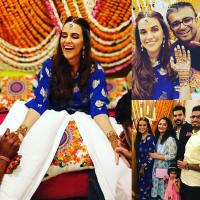 A joint statement released by the married couple, Neha and Angad, read, “Marrying your best friend is one of the greatest feelings in the world, and we are extremely fortunate to have found love in each other. It has been a beautiful journey knowing each other and after formalizing the wedding earlier this year, today, we exchanged our vows in a beautifully simple, private and intimate Anand Karaj ceremony in Delhi. We look forward to celebrating and sharing this special moment with our friends and colleagues in Mumbai in the next couple of weeks. Thank you for showering us with so much love. Your blessings have truly made this day so much more special”. (You May Like: Bigg Boss Lovebirds Bandgi Kalra And Puneesh Sharma Are Twinning In Military Print Outfits)

For those who missed the story yesterday, it must be noted here that Neha Dhupia tied the knot with Angad Bedi yesterday i.e May 10, 2018, in a Gurudwara wedding. It was an intimate affair following the ritual of Anand Karaj ceremony just like Sonam Kapoor Ahuja and Anand Ahuja. 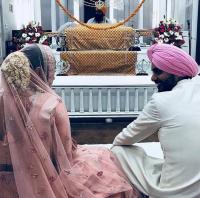 Neha herself took to social media and shared the happy news with her fans by writing, “Best decision of my life.. today, I married my best friend. Hello there, husband! @angadbedi”.

After their wedding, Neha and Angad were snapped at the New Delhi’s IGI airport leaving for the USA. Paparazzi who clicked the newly-weds report that Neha and Angad are going to the US for a charity show but media houses have also been suggesting that they are actually going for their honeymoon. Take a look at the pictures: 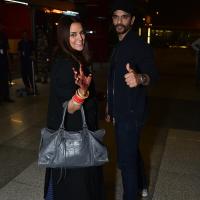 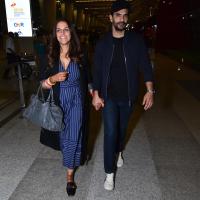 For the uninitiated ones, Angad Bedi is a Bollywood actor, who made his debut in 2004 with the Hindi film, Kaya Taran. He is also the son of Bishan Singh Bedi who is a former Indian cricketer. Neha made her Bollywood debut in 2003 with the film, Qayamat: City Under Threat. She will now next be seen in Pradeep Sarkar’s Eela opposite Kajol. (Also Read: Ranveer Singh Excused Himself At Sonam's Reception To Attend A Call From Deepika? She Leaves A Hint) 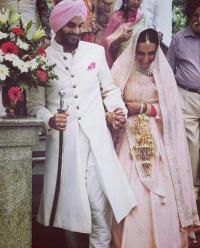 We wish Neha Dhupia and Angad Bedi a very happy married life and hoping to stumble upon more beautiful pictures from their wedding ceremonies.