Femina Miss India, 2002, Neha Dhupia is perhaps one actress of the Indian film industry and also one, among very few Bollywood actresses, who is unabashed, cool and unapologetic about anything and everything that she does. She is bold, sensational and of course, beautiful. Her charismatic persona which is so evident both on-screen and off-screen does come with a surprise for many of her fans.

Until recently, it used to makes us all wonder that how on earth, such a lady and a successful Bollywood star remains unmarried for so long! But when she gave us the sweet surprise of getting hitched to Angad Bedi on May 10, 2018, we were all a little shocked. So what’s her love-life been like before her marriage with Angad? Was she involved with any leading men at any given point of time in her 16-year-long career? Let’s explore Neha Dhupia’s love story and the men in her life.

Crush with a squash Qayaamat actress, Neha Dhupia’s first fling happened with Ritwik Bhattacharya, a national level professional squash player. Little is known about how they met, and rightly so, considering that during those times, Neha was in no ways the centre of the public eye. She used to appear only in the commercials. As per some reports, Neha and Ritwik met somewhere in 2000 and stayed much-in-love for a good long 10 years! In fact, rumours kept floating constantly that their marriage was on the cards, but unfortunately, that didn’t solidify. They parted their ways in 2010. Recently, in an interview with the DNA, Neha talked about Ritwik and said:

“We have been in and out of the relationship for a long time now. We are no more together and I am very much single.”

“It’s good. I am happy for him if he has done good for himself. But there is no point in discussing about that. I have moved on in life and I have happily moved on in life.”

For those of you who do not know, Ritwik was the runner-up in the reality TV show, Fear Factor – Khatron Ke Khiladi Level 3. He is now married to Pia Trivedi.

An innings with Yuvi 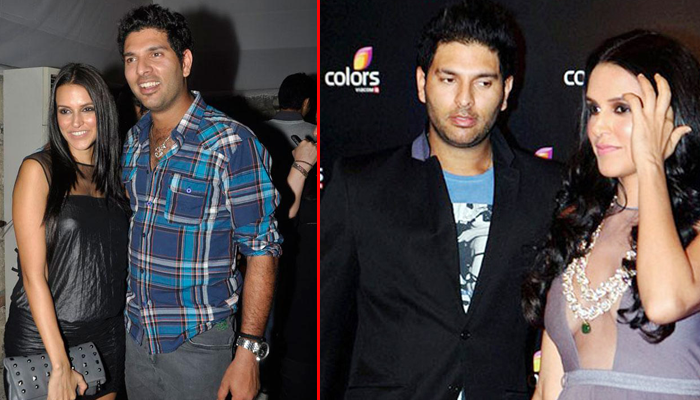 In the year 2014, it was reported that Indian cricketer, Yuvraj Singh, arrived with Neha Dhupia to attend the singer-actor Sophie Choudry's birthday. What happened next, every fan knows. Yes, soon after these reports, conjectures and speculations started doing rounds that Neha and Yuvi are seeing each other. In fact, after a few weeks, there came reports that the marriage is on the cards for the two celebrities. However, soon Neha denied any relationship with Yuvraj and refuted such rumours, Yuvraj went ahead and got engaged to British model and actress, Hazel Keech. Today Yuvraj and Hazel make one of the best celeb couples in India. 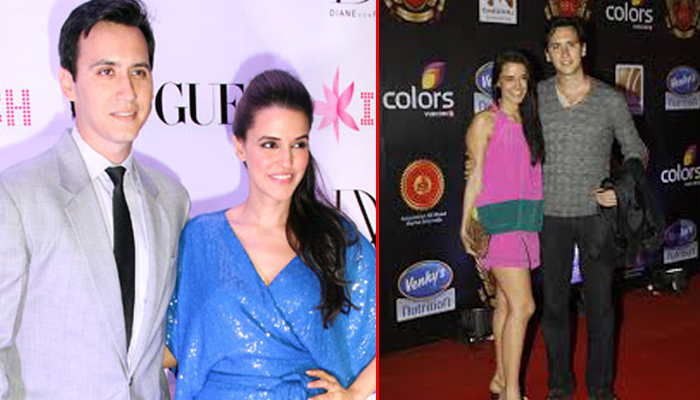 When Neha was with Ritwik, she happened to meet a guy from Venezuela who was reportedly a dentist. How they met and when they met, is not known to anyone but Neha and James Sylvester. James used to work in the US but their bond was such that he shifted to Mumbai for his lady-love. But then, there came reports that Jimmy (as Neha used to affectionately call him), flew back to the US. Quite obviously, there were rumours that the couple has parted ways. Later, Neha herself cleared the air and admitted to having broken up with James. To a leading online portal, she was quoted as saying:

“Yes, Jimmy (as she fondly calls him) has moved to Washington. Beyond this, I don't wish to comment on my personal life.” A source close to her revealed:

“Things ceased to be the same between Neha and James after he went from India. They tried to keep the long-distance relationship going, but things just didn't work out.”

Don't Miss: 9 Cutest Proposal Stories Of Television Celebrities Which Will Make You Fall In Love With Them

And finally, she became Angad's, forever.... 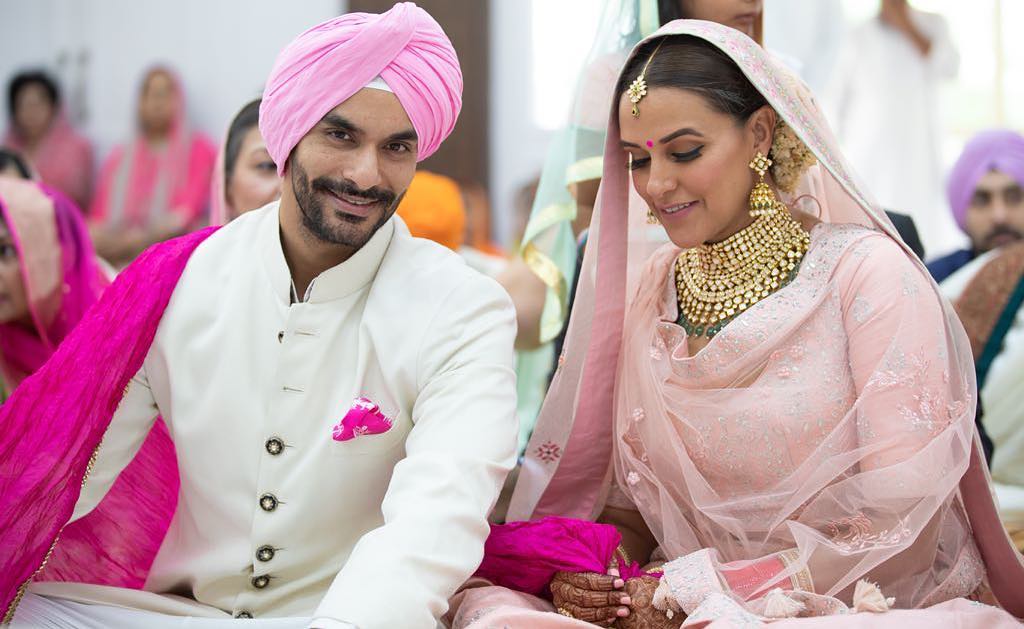 O yes! How could any of her fan forget the evening of May 10, 2018, when she herself announced to the whole world that is now married to Soorma actor, Angad Bedi? Sharing the above pic, Neha took to social media and wrote:

"Best decision of my life.. today, I married my best friend. Hello there, husband! @angadbedi".

Later, the couple released a joint statement stating their marriage, which could be read as:

And then they were 3 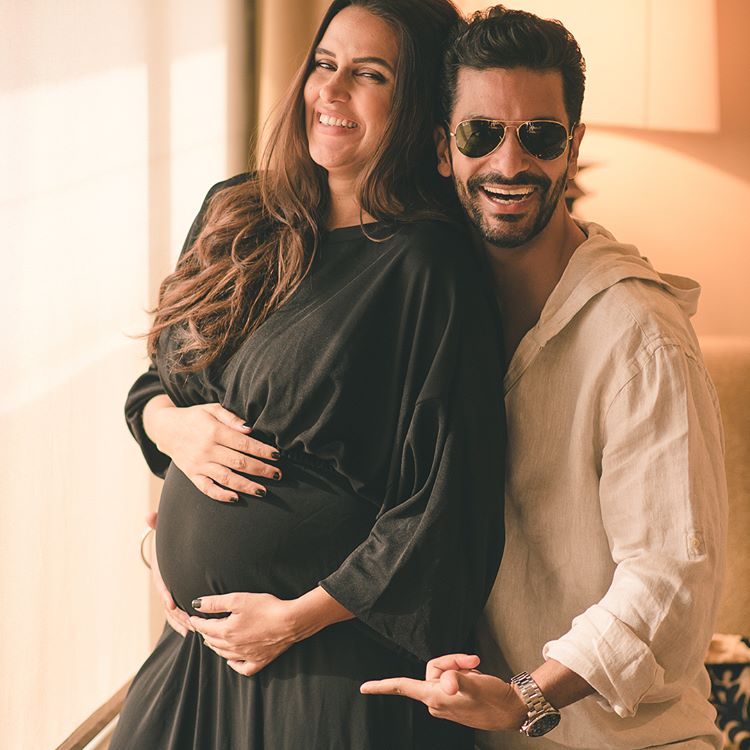 It seems that Neha Dhupia has a good knack for giving sweet surprises to her fans. On the night of August 24, 2018, Neha shared with her fans that she is pregnant. Sharing the pics of her baby bump along with hubby, Angad, she wrote on her Insta handle: Angad, too, posted the pic and wrote:

"Ha! Turns out this rumor is true.. #3ofus #satnamwaheguru". 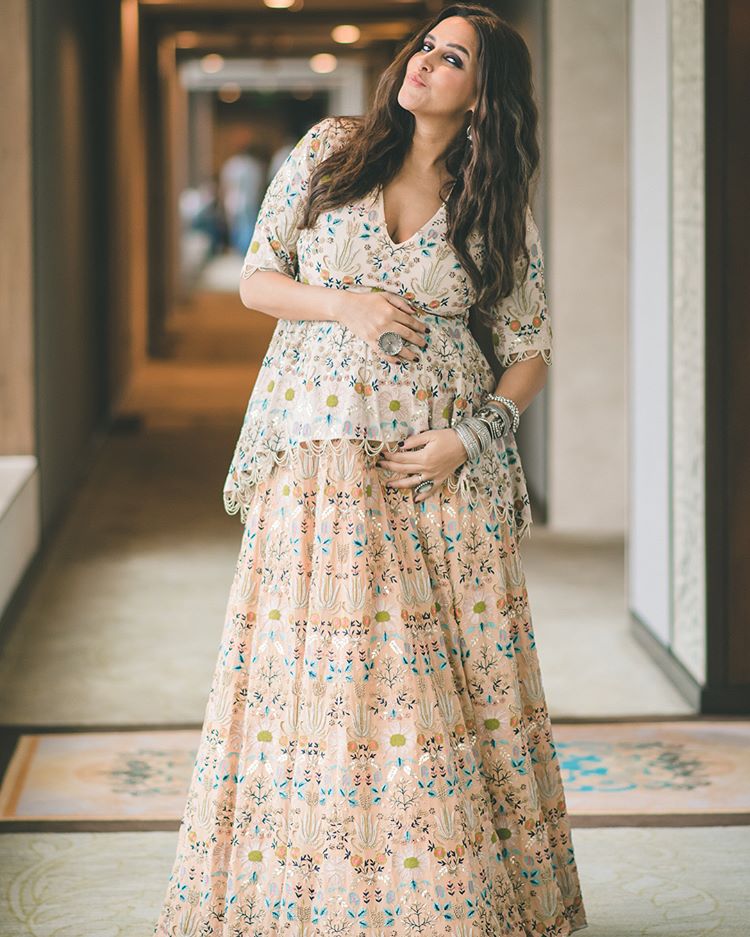 After announcing her pregnancy, Neha talked to the Times of India and shared a few words about her hubby and their soon-to-arrive baby. She was quoted as saying:

"This is a very tough one (to answer) but yes, his reaction was really amazing. Even before we are there, I can say for sure that he will be a rock-solid father, the way he is a rock-solid husband. And, in every aspect, he is respectful and has a great set of values. I have only seen him around our nieces and nephews, and he is absolutely wonderful with them. I cannot wait to see him change diapers… I will put up a video of that".

Well, here we’re! These were the men in Neha Dhupia’s love life. After getting close to marriage twice, she finally married her best friend, Angad Bedi. Apart from the pics of her baby bump and motherhood, we really are desperate to see her baby soon, who is reportedly due in November 2018.

Next Read: 18 Indian TV Celebrity Couples Who Had Grand Weddings Like Never Seen Before