Neha Dhupia and Angad Bedi will celebrate their first wedding anniversary on May 10, 2019, in Mauritius. They have flown off to the exotic location and Neha Dhupia is having a 'happy twosday' there!

Neha Dhupia and Angad Bedi had surprised us all by getting married out of nowhere on May 10, 2018, in a Gurudwara wedding. There was no hint earlier that they were head-over-heels in love with each other, and their hush-hush wedding came as a sweet surprise to everybody. Soon, fans started speculating that Neha Dhupia was pregnant before her marriage, and the then-newly-weds denied such rumours. (Suggested Read: Arjun Says Anshula Is Their Late Mother's Replica, Shares They Relive Her Memories Through Pictures)

But the rumours turned out to be true and on November 18, 2018, Neha Dhupia and Angad Bedi became proud parents to a baby girl after 6 months of marriage and named her Mehr Dhupia Bedi. Since then, Mehr Dhupia has been driving their doting parent's lives crazily but happily.

Neha Dhupia Is Planning To Celebrate Her 1st Anniversary In Mauritius, And She Is Taking Mehr Along 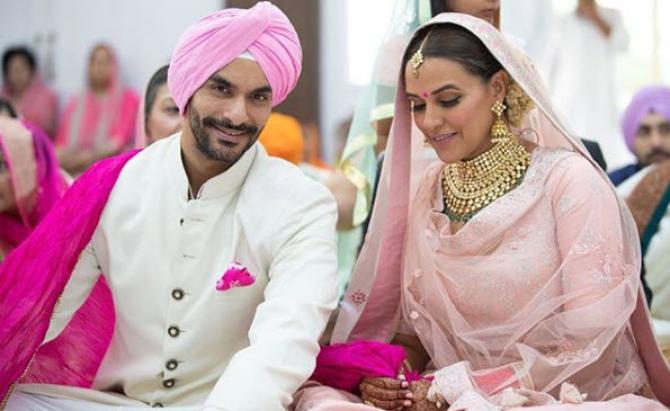 Neha Dhupia and Angad Bedi are going to celebrate their first wedding anniversary on May 10, 2019. And guess what? The doting couple has already flown to Mauritius to ring in their first wedding anniversary. Neha Dhupia is surely enjoying her vacay as she is having her "Happy #twosday" there! She shared the following picture on her Instagram handle: 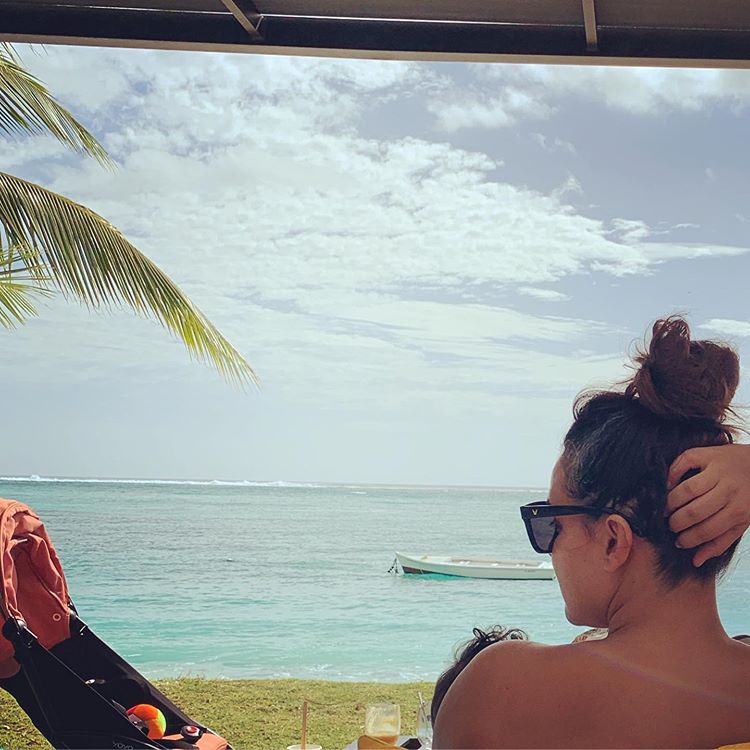 Neha Dhupia has been sharing their pictures from Mauritius on her Instagram stories. Take a look: 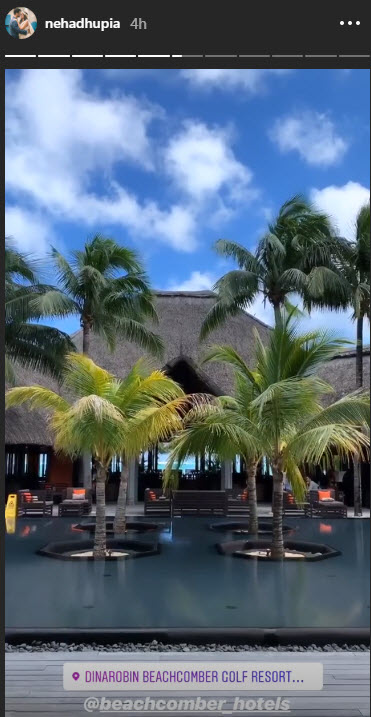 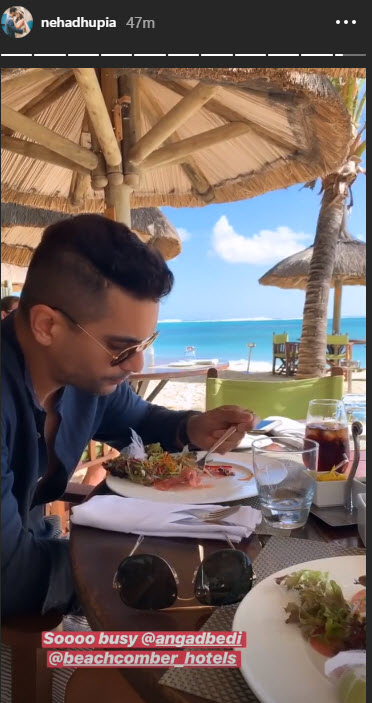 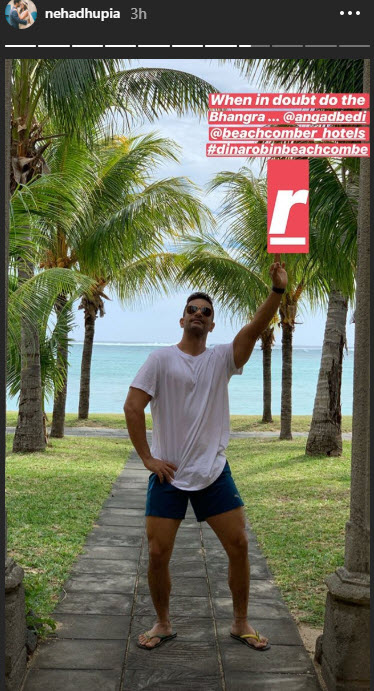 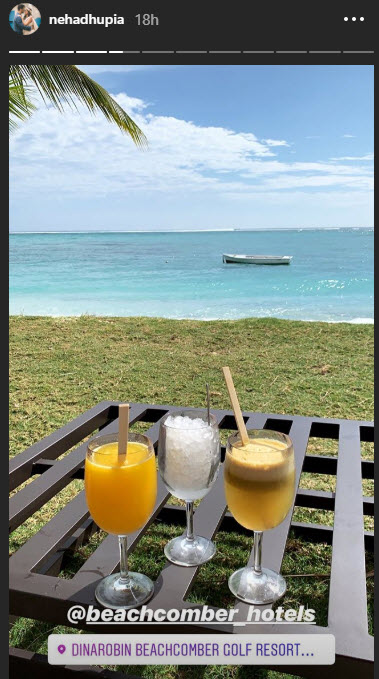 Angad Bedi had taken to social media to post the following images to announce to the whole world about his excitement for their first wedding anniversary. He had captioned the pictures as, "Just a few days left baby!!! @nehadhupia #singhnaaljodijachdiaekaurdi #10thmay #firstanniversary."

Earlier, in an interview with the Hindustan Times, Angad had talked about post-marriage changes and had shared, “It’s a rosy phase and she asks me every day what I want to have for dinner. And I keep teasing her saying, “Yeh toh abhi naya naya hai. Wait for six months’. I wish you keep on asking me this for many years to come.” That’s the beauty of a relationship that you keep on working towards it.”(Recommended Read: Charu Asopa Reveals Details Of Her Grand Wedding, Shares Equation With Sister-In-Law Sushmita Sen) Neha Dhupia, on the other hand, had stated to a media portal, “He tells me that he 1st saw me at the gym when I was 20 & told his friends, ‘I’m going to get to know her 1 day. When we moved to Bombay, we met at a mutual friend’s party–it was just us standing in the balcony. I saw a different side of him–beyond the jokes & wit, there was a sensitive man. We were both away from home in Mumbai, so I always relied on him for support. He lived a bachelor life & the 1 place he could always get home food was mine. We became close friends–there was no façade & no attempt to impress one another. Well, no attempts on my part! In fact, he was the 1st call after a major heartbreak & he talked me through it–I’m sure there was a hidden motive!” She had further added, “He wasn’t low key about his feelings for me. I was shooting in Punjab & told him about a role for him. He didn’t ask for any details. He only cared about spending time with me & flew down immediately. After that shoot, he showed up at my parents’ doorstep & asked for my hand in marriage….I had no idea about it! This was when I was dating someone else! When Angad met my boyfriend, he was nice to him, but wasn’t subtle about his love for me!” 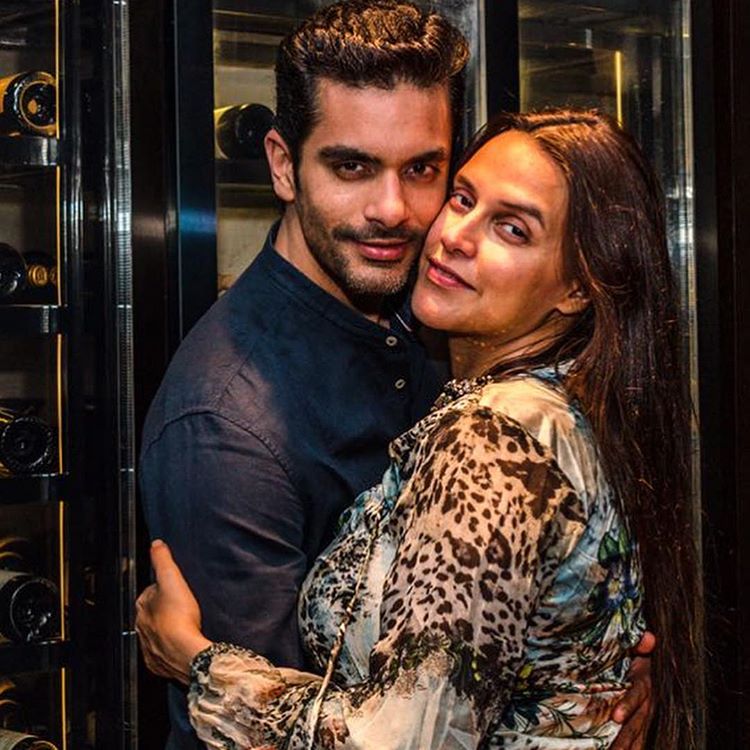 Neha had also talked about the time when they finally confessed their feelings, “Finally, at a party, Karan Johar took us aside & screamed, ‘Can you not see this?! Are you blind?’ You should’ve seen the look on Angad’s face. He had ‘I told you so!’ tattooed on his forehead. When we finally decided to get married, he didn’t go down on one knee & propose. He told me I’d already wasted 4 years & declared ‘Chalo Dilli!’ to meet his parents. Then he said, ‘Before you change your mind, pick an outfit because we’re getting married in 2 days!’” (Also Read: Sonam Kapoor Ahuja-Anand Ahuja Get Wishes From Anil, Sunita, Rhea, Sanjay, Maheep (Pictures Inside)) How did you like Angad Bedi and Neha Dhupia's pictures from their Mauritius vacay where they will ring in their first wedding anniversary? Share your views!