There is no dream that is impossible and no wish, which can't be fulfilled. All you need is a little bit of patience, and a lot of belief to achive your heart's true desire. And a perfect example of it is Bollywood actress, Alia Bhatt, who not only made a huge name for herself in the industry, but also proved her acting prowess. While her professiona life become a hit, her personal life also turned into a bed of roses with the arrival of her love, Ranbir Kapoor. (Recommend Read: On Prithviraj Sukumaran's 38th Birthday, His Wife, Supriya Menon Brings A Cute 'GOAT' Cake For Him)

Before we take you further into the story, let us take a look back at Alia and Ranbir's love story. It seems like they were destined to be together as in the year 2014, Alia had admitted her crush on Ranbir on the celebrity chat show, Koffee with Karan. On the same show, she had accepted that she wanted to marry the charming actor. And looks like, the universe had listened to Alia and had made the two fall in love with each other. Ever since they started dating, the media mills are abuzz with their dinner dates and cutesy pictures.

The COVID-19 outbreak has created a 'new normal' world for us, where masks have become a need and social distancing a must to stay away from the virus. Taking a dig at the year 2020, Alia took to her Instagram handle and remembered the times when masks were just a part of skincare ritual. The actress posted a picture of herself wearing a sheet mask and relaxing on the grass. Her caption can be read as "Throwback to when masks were skincare & people were kind", followed by a rainbow emoji. And her beau, Ranbir Kapoor's mom, Neetu Kapoor also agreed with her and commented, "Fabb." Check it out below: 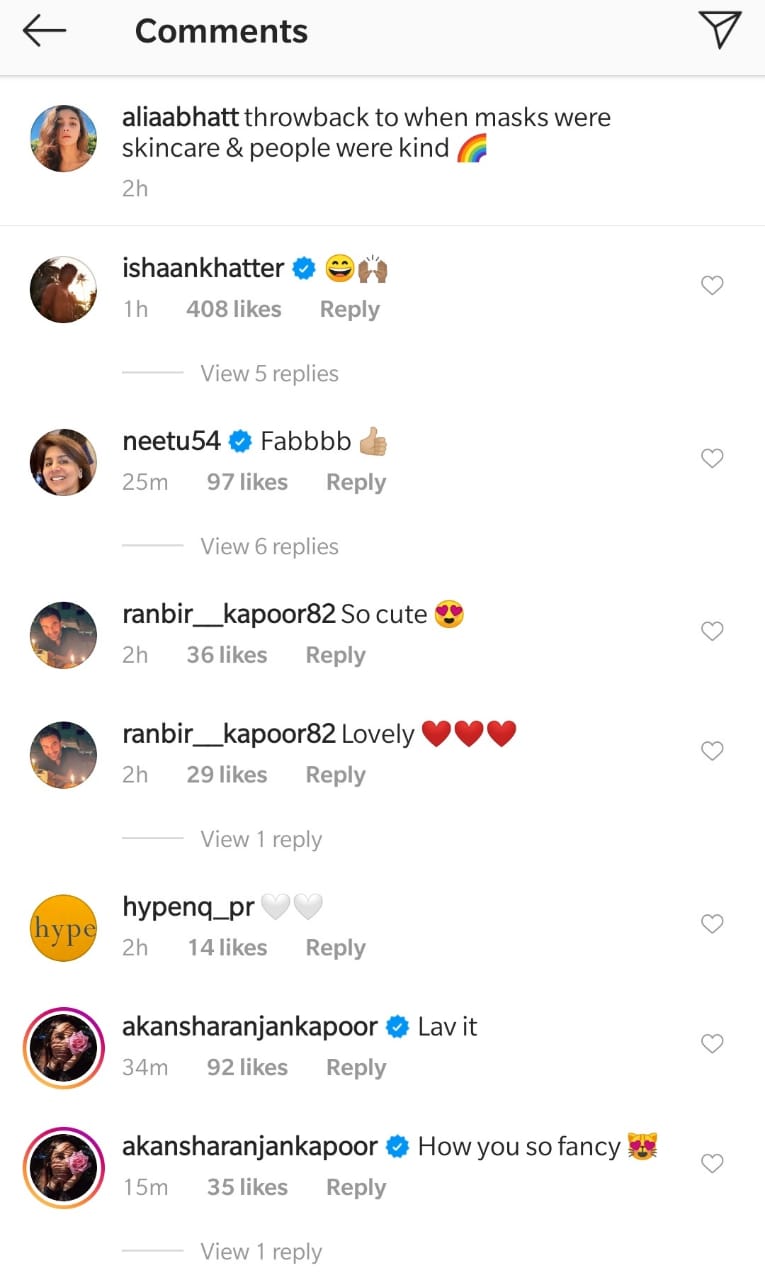 A couple of weeks ago, we had gotten hold of a video of Neetu ji dancing on Ranbir's song, Ghagra from the film, Yeh Jawaani Hai Deewani. The video was shared by Master Rajesh Singh on his Instagram handle, and we could see Neetu ji dancing her heart out. Soon, the video had gone viral and netizens had stated wondering if Neetu ji was rehearsing for her son, Ranbir's wedding with Alia. A user had commented, "Is this for Alia and RK wedding,” while another user had said, “Pls don't tell me this is for Alia n Ranbir's wedding plss I hate alia.” (Also Read: Hema Malini Opens Up On Her Marriage With Already Married, Dharmendra, Says, 'I Never Took Him Away') Alia also never fails to shower her love on her future mom-in-law. We remember on Neetu ji's birthday, Alia had penned a lovely note. She had posted an IG story with Neetu ji's throwback picture. Alongside it, she had written, "Happy Happy Birthday @neetu54 You have and always will inspire me every single day. Love you too much." 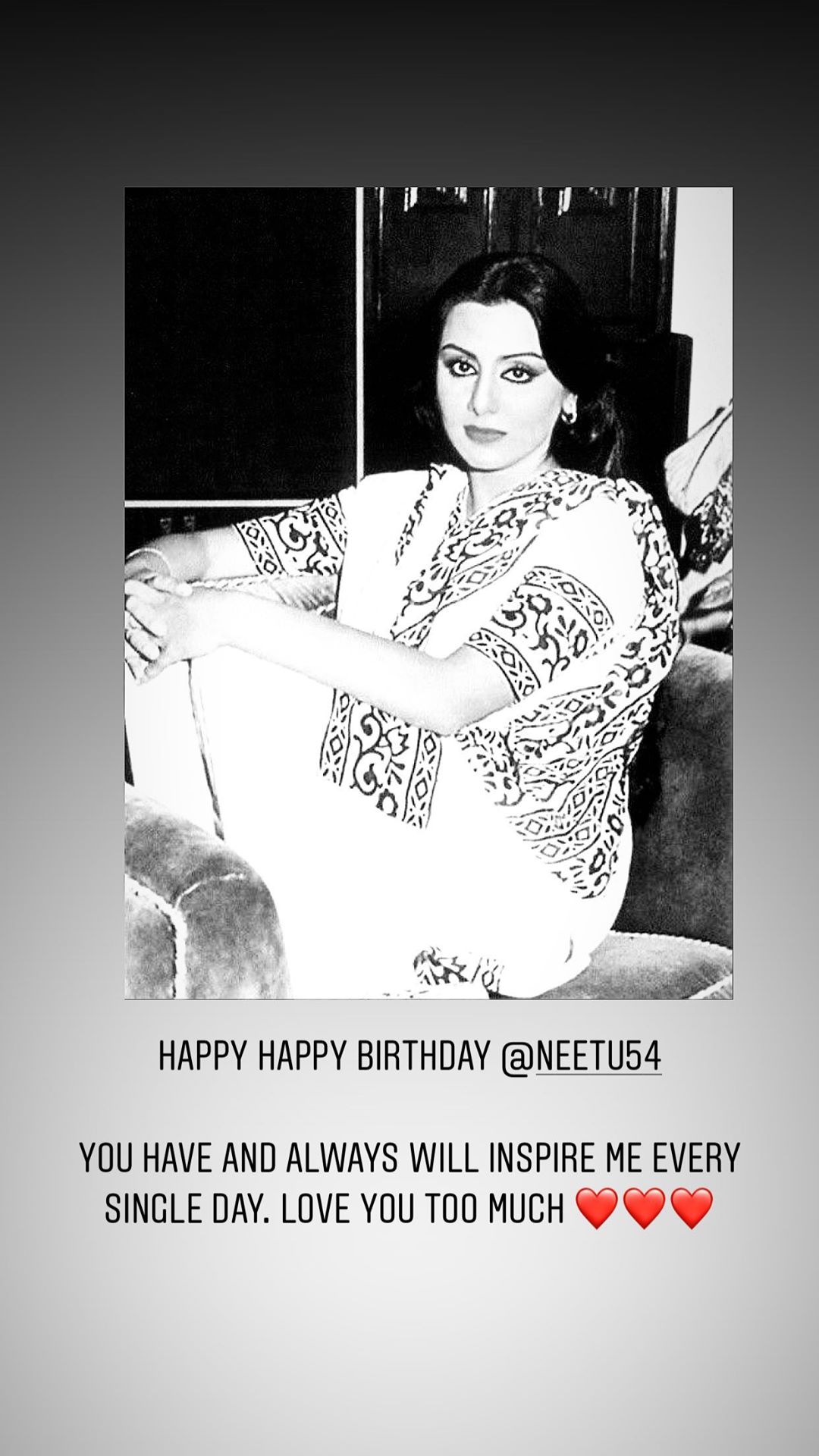 Coming back to Alia and Ranbir's relationship, in an interview with the Bombay Times, Alia had opened up on her beautiful relationship with Ranbir and how it has grown over time. She had shared, "It's not a relationship. It's a friendship. I'm saying this with all genuineness and honesty. It's beautiful. I'm walking on stars and clouds right now. The best part is that we're two individuals who are living our own professional lives in its full form right now. He's shooting continuously. So am I. It's not a situation where you'll see us constantly together. That's the true mark of a comfortable relationship. Nazar na lage." (Don't Miss: Aditya Narayan Rubbishes Claims Of Being Bankrupt, Says He Was Overwhelmed With The Offers Of Help)