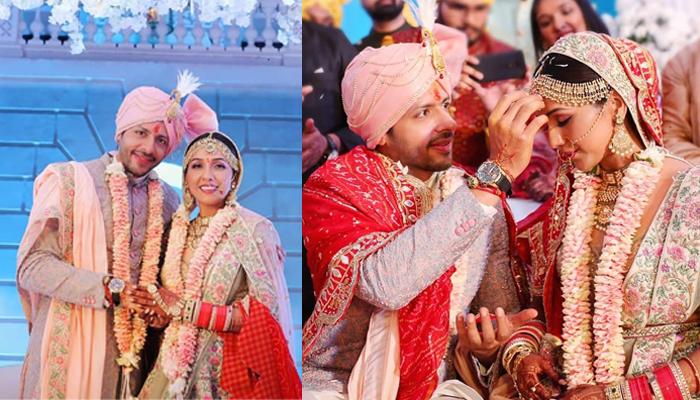 Celebrity weddings are happening incessantly in the tinsel town, and the most recent addition in the list is Bollywood singer, Neeti Mohan and Manikarnika: The Queen of Jhansi actor, Nihaar Pandya. Neeti and Nihaar’s pre-wedding functions began with mehendi, sangeet and engagement ceremony on the Valentine’s Day, February 14, 2019, at The Taj Krishna, Hyderabad followed by their wedding the next day. (You May Like: Mira Rajput Kapoor Celebrates Her Son, Zain Kapoor's 'Delicious' Half Birthday)

Nihaar Pandya is celebrating his birthday today on March 06, 2019 and it’s his first birthday post his wedding. Naturally, everything first, right from the first Karva Chauth to the first Diwali post-marriage is a special one. And his now-wifey, Neeti Mohan has the best birthday gift for him. Neeti Mohan took to his Instagram handle and shared a video (don’t forget to swipe left) in which we can see the complete wedding journey of her and Nihaar’s. She has captioned it as, "Main tey jaana tere naal" Happy Birthday my soul mate @nihaarpandya Loving you is like a Prayer...Sacred....most Precious!!! THANK YOU FOR MAKING ME LUCKIEST GIRL IN THE WORLD. #BestHusband.”

Did you check out every little detail in the videos above? How did the two dress up for their D-day, their wedding outfits hung down for wedding shoot, their most emotional moments, and what not!

Neeti and Nihaar’s wedding had long been anticipated and finally, on February 20, 2019, the newbie married couple shared their wedding looks with their fans. Sharing the same on social media, Neeti and Nihaar wrote similar captions, “With the blessings of family, friends and well wishers, we are blissfully married. Dad's health is getting better each day. The Mohan and Pandya family THANK YOU for your constant love and support.”

Neeti Mohan had earlier shared with SpotboyE how love blossomed between her and Nihaar. She had shared, “We both have strong values and quite similar ones. I think Jimmy knew that, and trust me, he was very sure that we would click. He introduced us at a wedding, where Nihaar was accompanied by his parents. They met me very warmly and there was an instant connect with not just Nihaar but also his family members.” (Also Read: Rhea Kapoor Turns A Year Older, Sister Sonam Kapoor Ahuja Posts A Million Dollar Throwback Picture)

Neeti had also shared one quality that the two like about each other. Neeti was quoted as saying, “Well, I am beyond gauging a person based on his looks. I try to gauge the inner core of the person, which I think is so prevalent in Nihaar.” Further revealing what he likes the most about her, she had stated, “Aise koi poochta thodi hai that what you like about me the most?”

Neeti had also revealed if she would be moving in with Nihaar and his parents post their wedding, “I am moving into his house and will stay with his family. And trust me again, I am really looking forward to that.” Well, the couple isn't planning an immediate honeymoon after the wedding. Talking about the same, Neeti had said, “Not decided (about the honeymoon), but it will have to wait. I have a couple of assignments going on.”

It must be noted here that on Neeti Mohan’s wedding, her father couldn’t be present by her side. Her father, Brij Mohan had to be admitted to a hospital right before the D-day due to some unfortunate medical emergency. One of the four Mohan sisters, Mukti Mohan had shared with SpotboyE, “Dad cannot take too much physical stress, so we had kept him in the hotel room. He was not to be seen at the mandap and people freaked out.” Revealing the next set of incidents, she shared, “Well, we had called the doctors to the hotel room and they suggested that he should be shifted to the hospital.” (Suggested Read: Sonali Bendre Behl Flaunts 20-Inch Scar From Cancer Surgery, Says She Doesn't Find It Ugly Anymore) 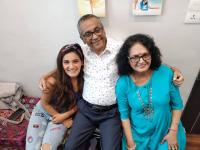