Bollywood actress, Ayesha Takia's sister, Natasha Takia got married and shared a happy post for her husband. Scroll down to see the cute post! 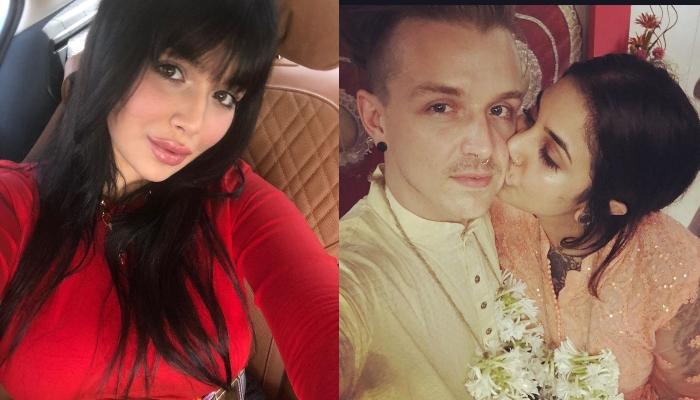 When we were young and silly and knew nothing about being someone's Mrs, we still dreamt of becoming a bride. After all, it is the start of a whole new life and we need to make it one memorable day. And the wedding season is back in B-town and Ayesha Takia's sister, Natasha Takia was one of the lucky few, who tied the knot with her best friend and long-time boyfriend, Jack Tucker. (Recommend Read: Dipika Kakar Wears Her Hubby, Shoaib Ibrahim's Sweatshirt, Proves Sharing Is Caring)

In the summers of 2018, Natasha Takia and her boyfriend, Jack Tucker had welcomed their son, whom they had lovingly named, River Sol. Ever since the arrival of her son, Natasha's Instagram feed is filled with happy family pictures and the newborn's journey. The star-sister makes sure to share snippets of her life with her followers and keep us updated with what's going on in her life.

Recently, Natasha took to her Instagram handle and posted a cute selfie with 'Mr Husband'. Along with it, she wrote, "Married my best friend last night! Wish us in the comments now lol yay! Feeling so much love this morning! (No good pictures yet, waiting for anyone to send me one!!) We waited in the heat with a small baby and our families for 7 hours for the judge to agree to marry us. Thanks To the system for making everything harder than it needs to be. Makes me so sad. BUT this is a happy post! So yay! I have a husband, officially." Take a look at the picture below:

Today, on November 8, 2019, Jack also took to his Instagram handle and shared a happy moment from his wedding with Natasha. In the picture, we can see Natasha wearing a pink chikankari suit. On the other hand, Jack was donning a beige sherwani. Alongside it, he penned a long note for his wife that can be read as "We did it! Mr and Mrs Takia Tucker. My sun and stars. I can’t tell you how proud I am of my beautiful wife who looked STUNNING! We had a real test at the signing and for a while, it looked like we would be turned away for various reasons. I buckled some under the pressure but Natasha was solid as a rock for both me and river when we needed it most. I love you baby. Your my mostest only and always." (Also Read: Surveen Chawla Talks About Postpartum Depression, Reveals Her Phase Of Emotional Imbalance)

In his long note, he further thanked everyone who was involved in the wedding, "Thanks so much to my mother and father @janetucker60 and @tonytucker10. For flying all the way out in support. I couldn’t believe the surprise. the feeling of home you brought here was such a blessing on this day. Thanks so much to @nishitht And @faridahtakia For supporting us through this entire process and welcoming me into your lives so warmly , your generosity knows no bounds and I promise to care for Natasha until my last breath.Massive thanks to @ayeshatakia And @abufarhanazmi For working incredible magic behind the scenes and enabling this whole thing to manifest. And to your beautiful son who represented the Azmi’s with a level of maturity and sophistication well beyond his years on the day. Lastly thanks to every single person who has wished us well and blessed our day with comments and love. It’s so touching to read words from people we barely know who have followed our story, wishing us so much love and happiness and expressing genuine relief for us for passing this milestone. So so so so so much love from the happy couple and River Sol Takia Tucker."

For those who don't know, Natasha was earlier married to boyfriend, Joakim Lindstroem and had tied the knot in January 2013. However, the two had parted ways. And Natasha fell in love with British musician, Jack Tucker, who is her best friend, soulmate and now life-partner. The duo look cute together and they are together nurturing their munchkin.

In the year 2009, Natasha was all set to enter the film industry. In an interview with the Masala magazine, Ayesha had talked about her sister's dream of acting, and had shared, "My sister Natasha who is 21 will be in films next year. Hopefully she'll be welcomed in the industry like other star sisters. I'm very excited for her. Let's hope her career works. She's preparing herself, working out ferociously. When I started out I had no clue about these things. At least now when they know I'm her sister they'll give her a chance. There're so many beautiful girls in this country. Maybe they'll watch Natasha at least the first time because she's my sister. But there's the downside. They'll start comparing us." (Don't Miss: Shanaya Kapoor's Comment On Cousin Sister, Janhvi Kapoor's Picture Is Filled With Love)

Well, we cannot wait to see more pictures of Natasha and Jack's wedding!