Natasa Stankovic Records Her Hubby, Hardik Pandya As He Takes Their Little Boy, Agastya On A Stroll

Natasa Stankovic Records Her Hubby, Hardik Pandya As He Takes Their Little Boy, Agastya On A Stroll

After acing the national duty, Hardik Pandya is enjoying his 'daddy duties'. Recently, Natasa turned videographer and recorded her hubby, Hardik taking Agastya on a stroll.

A mother gives birth to a child, but it is the love and support of a father that gives them wings to fly in this world. A father might be considered the second parent, who never pays much attention, but in reality, he is silently witnessing and cherishing the best days of his kids' life. He is always ready to lend a supporting hand to his children whenever they want. And famous Indian cricketer, Hardik Pandya is acing his role of being a father. (Recommend Read: On Suresh Oberoi's 74th Birthday, His Son Vivek Oberoi Shares Cute Note, Calls Him His Moral Compass)

For the past four months, Hardik was on national as he was playing in IPL 2020 and was in Dubai for the same. The cricketer was away from his family and he had often shared how much he was missing his then-newborn baby, Agastya. On December 13, 2020, the cricketer had taken to his Instagram handle and had shared a cute family picture. In the picture, we could see Natasa looking gorgeous as she had posed for the camera with their pooches while Hardik was clicking the picture.

Hardik Pandya Shares A Happy Picture With Agastya, The Little Munchkin Smiles Exactly Like His Daddy On December 17, 2020, Hardik's wife, Natasa turned paparazzi and recorded his adorable moment with his kid and shared it on her IG stories. In the video, we can see Hardik taking his little boy, Agastya on a stroll in his little pram. The cricketer donned a casual white t-shirt with a pair of black pants and wore a mask. Check out the screenshot of the same below: On December 13, 2020, Hardik had shared a super cute picture with his little boy, Agastya. In the picture, we could see Hardik feeding milk to his baby with a bottle. Alongside it, he had written, "From national duty to father duty", followed by a heart emoji. (Also Read: Neha Dhupia Shares Unseen Clicks of Her Daughter Mehr Dhupia Playing With Her 'Nanu' On His Birthday) 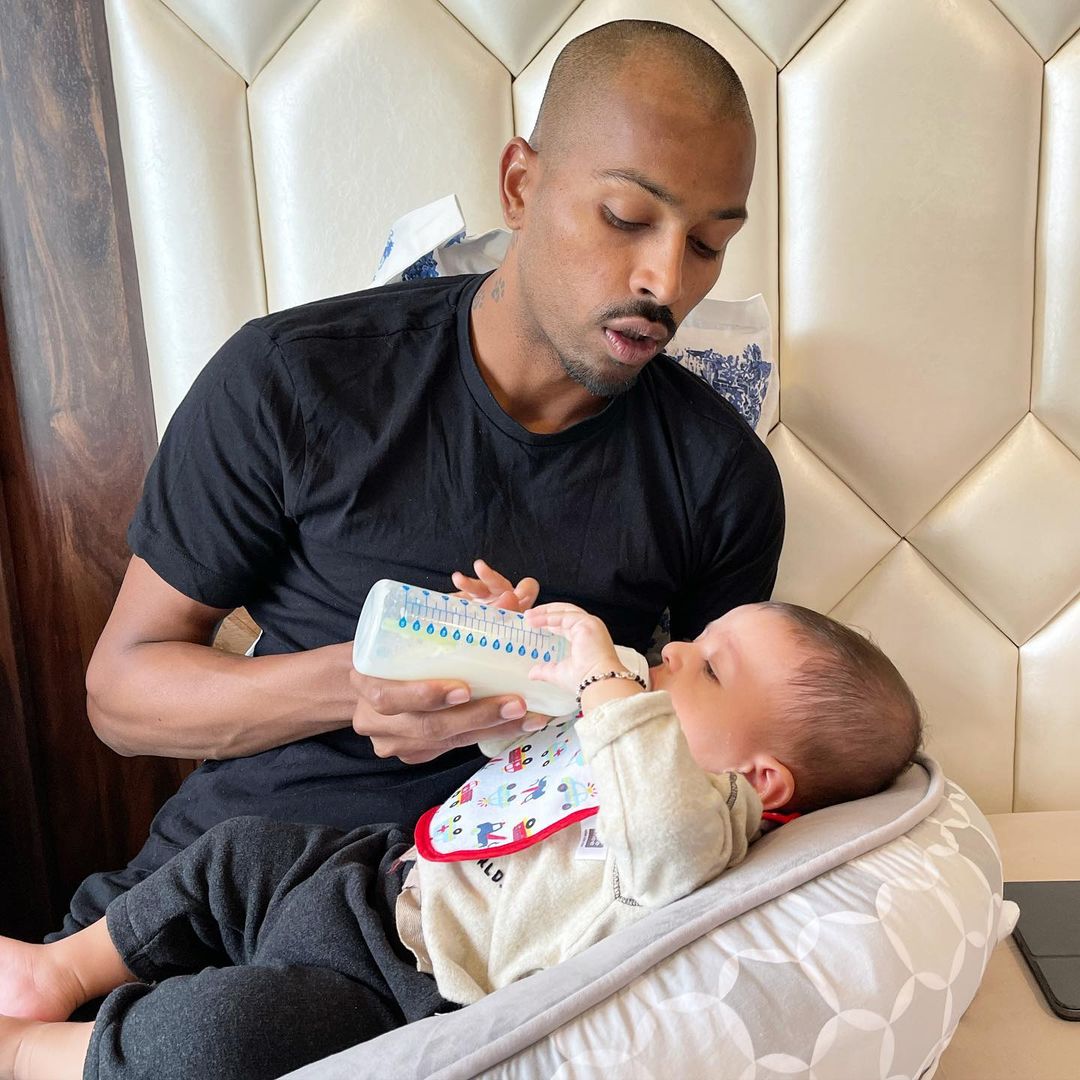 On November 6, 2020, Hardik had shared an adorable video of his son, Agastya's playtime with him. The cricketer was missing his baby boy as he was away from him for IPL 2020. In the video, we could see Hardik giving a high five to his little boy, Agastya. He had also shared a hugging picture with him. Alongside it, he had written, "Play time with Agastya, the thing I miss most. I'll remember these days for the rest of my life."

Earlier, in an interview with crickettimes.com, Hardik had shared how he had met the love of his life, Natasa. The cricketer had shared, "I got her by talking. She saw someone in a hat at a place where I met her, wearing a hat, a chain, a watch, at 1 am. So she thought he is 'alag prakaar ka aadmi aaya' (different kind of person came). She had no idea who I was." The cricketer had also revealed his parents' reaction on finding out about his engagement and had stated, "My parents also didn't know that I was getting engaged. Two days before (the engagement), I told Krunal. I told him, 'I have had enough. I have found someone in my life who I love, and I am becoming better'. They (family) backed me and told 'do whatever you want'." (Don't Miss: Kangana Ranaut's Candid Dancing Photographs From Her Brother's Mehendi Ceremony Exudes Her Happiness)

Hardik is definitely a hands-on father! What do you think? Cricketer, Hardik Pandya and his model-actress, wife, Natasa Stankovic's love story and chemistry had made us all go 'aww'. Firstly their engagement picture, then a sneak peek into their intimate wedding and then the big announcement of embracing parenthood, all of it has set some high standards for all the