Veteran actor, Suresh Oberoi turned 74 today and his son, Vivek Oberoi has shared an emotional birthday wish for him on his IG handle. Take a look!

One of the most popular actors of his generation, Suresh Oberoi is celebrating his 74th birthday today, and the internet is buzzing with the dialogues of his movies and monochrome photos from his early modelling days. The actor has ruled the big-screens in the 1980s and 1990s with his villainous characters and some supporting roles too. In the year, 1987, Suresh Oberoi was given the prestigious National Film Award for Best Supporting Actor for his powerful performance in the film, Mirch Masala. (Recommended Read: Neha Dhupia Shares Unseen Clicks of Her Daughter Mehr Dhupia Playing With Her 'Nanu' On His Birthday)

Since then, he had appeared in a lot of movies and was most recently seen in the blockbuster film, Kabir Singh in which he had portrayed the character of the lead actor, Shahid Kapoor's father. And, today on his birthday, his famous dialogue from same is going viral on the internet that reads "Zindagi mein kisi bhi cheez ki gehrai tak pahuchoge na… Toh haath lagaiga sirf zero or tumhara bhai zero ke bahot gareeb hai." 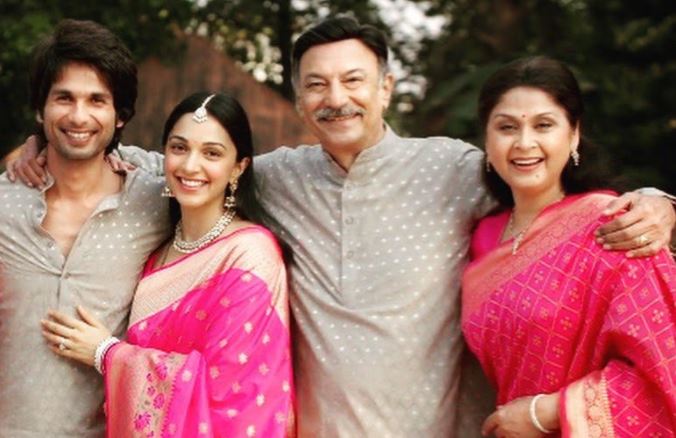 On December 17, 2020, Bollywood actor, Vivek Oberoi took to his Instagram handle and shared a classy and stunning picture with his father and actor, Suresh Oberoi. In the picture, the father-son duo looked handsome in their respective suited and booted avatar and can be seen having a conversation. One glance at their candid photo and it'll make you fall in love with the beautiful bond of this father-son duo. Along with this photo, Vivek penned an emotional note for his dad on his birthday, and it can be read as "Happy birthday to the best dad in the universe! Thank you for being my father, my guide, my inspiration and my moral compass in life! Love you, infinitely! @oberoi_suresh." Take a look: 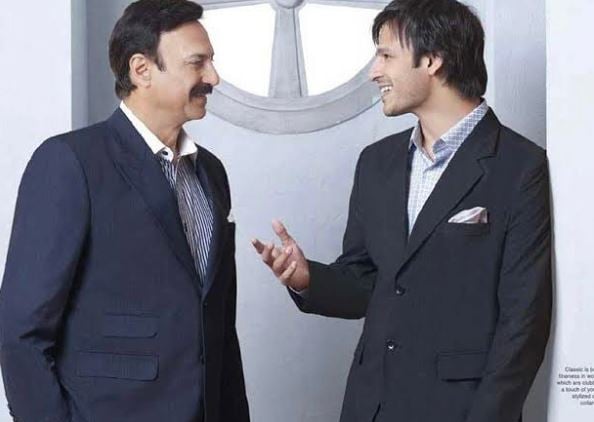 For the uninitiated, Vivek Oberoi shares a warm bond with his father, Suresh Oberoi and glimpses of the same we have witnessed a lot of time in all these years. For instance, on May 26, 2020, Vivek Oberoi had taken to his Twitter account and had shared a list of stars from both Hollywood and Bollywood with a great voice which also had his father's name in it. The proud son had heaped praises on his dearest daddy and had written, "Just stumbled upon this! So proud of you dad @sureshoberoi ! Never knew that golden voice that used to tell us bedtime stories, love, advise & sometimes scold us all was one of the best in the world! Love you dad!" in his tweet. (Don't Miss: Kangana Ranaut's Candid Dancing Photographs From Her Brother's Mehendi Ceremony Exudes Her Happiness) 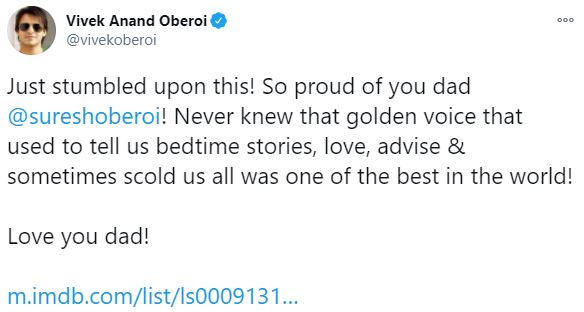 Last year, the whole Oberoi family had gone on a family vacation to the Maldives. And, it was the doting son, Vivek Oberoi, who had shared a perfect family selfie straight from the airport. He had captioned the picture as "Full oberoi khandaan at the airport. #holiday time! The Maldives here we come! #maldives #vacation #famtime #timeout.” Soon after that, he had shared a Boomerang, along with which he had written, "Look closely. Flow with the magic mmmmmaldives! #HeritanceAarah." Take a look: (Also Read: Bigg Boss 14: Aly Goni Warns Jasmin Bhasin To End Their Friendship If She'll Support Nikki Tamboli) 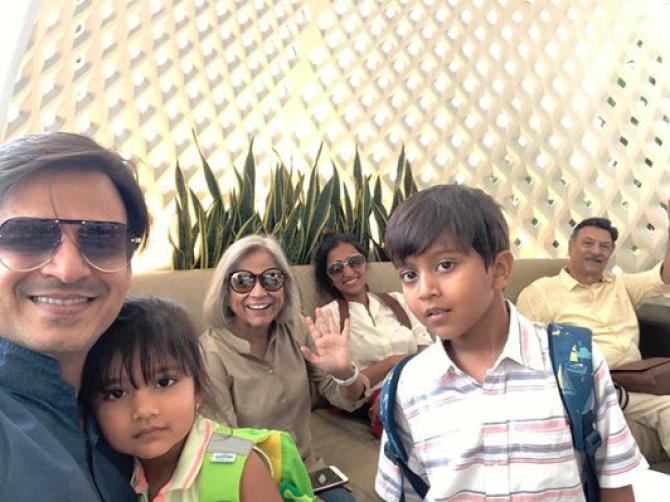