A month after her brother's wedding, Kangana Ranaut posted a couple of candid pictures of herself, dancing to the folk music of Rajasthan.

Growing up together, the relationship you share with your siblings is the most special one and no matter how much they annoy you, they have been there for and with you through your thick and thin. They are the mains of your life and when you decide to get married, it is your siblings who are the happiest and most excited for the ceremonies. It was indeed a festive year-end for the Ranaut family as two handsome brothers of the Queen of B-town, Kangana Ranaut had tied the knot in grand ceremonies. Kangana and her sister, Rangoli Chandel had given glimpses of the ceremonies from both of the weddings on their respective IG handles. (Also Read: Gauahar Khan And Beau Zaid Darbar's Pre-Wedding Shoot Reel Captures The True Essence Of Togetherness)

Post the wedding festivities, Kangana Ranaut had left for Hyderabad to shoot for her upcoming film, Thalaivi. It was difficult for her little nephew, Prithvi Raj Chandel to let his maasi go after spending so many months with her. Recalling how Prithvi had asked her not to go, Kangana had posted a picture with her nephew from one of the wedding functions of her brother and had captioned it as “When we left for the shoot, he said don’t go, I insisted I need to work, he looked thoughtful and immediately sat in my lap and said smilingly....ok you go but let me sit with you for two mins.... still get tears thinking about his face.” 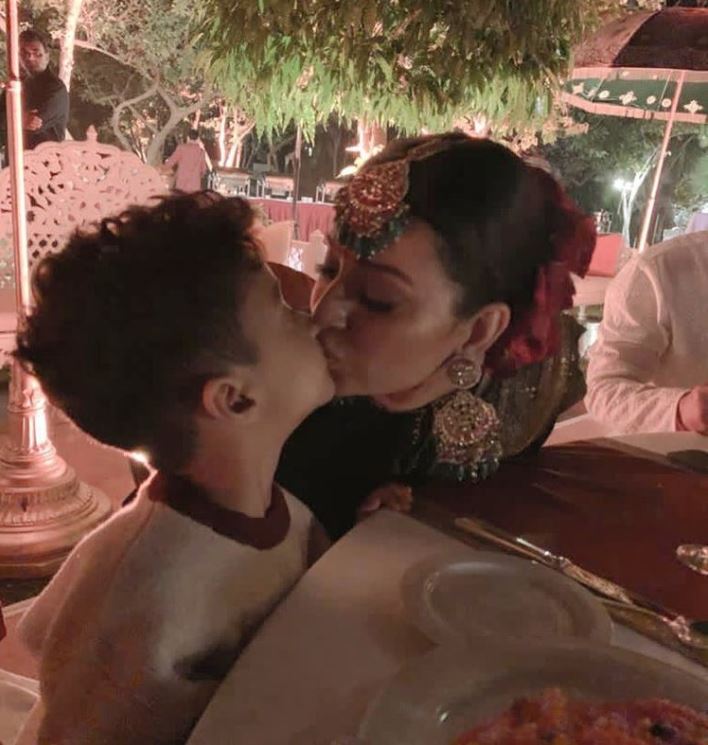 Looks like Kangana Ranaut is missing the fun days of her brother’s wedding as she is reminiscing the beautiful moments of the ceremonies. Kangana posted a couple of candid pictures of herself, dancing to the folk music of Rajasthan. Kangana tweeted, “Throwback to last month, Some lovely images from Bhai ki Shaadi.” Back then, Kangana had posted a video of herself, dancing with her sister, Rangoli Chandel at the mehendi ceremony of her brother. Kangana’s team had captioned the video as “Kangana at Mehandi ceremony. The vibes.” 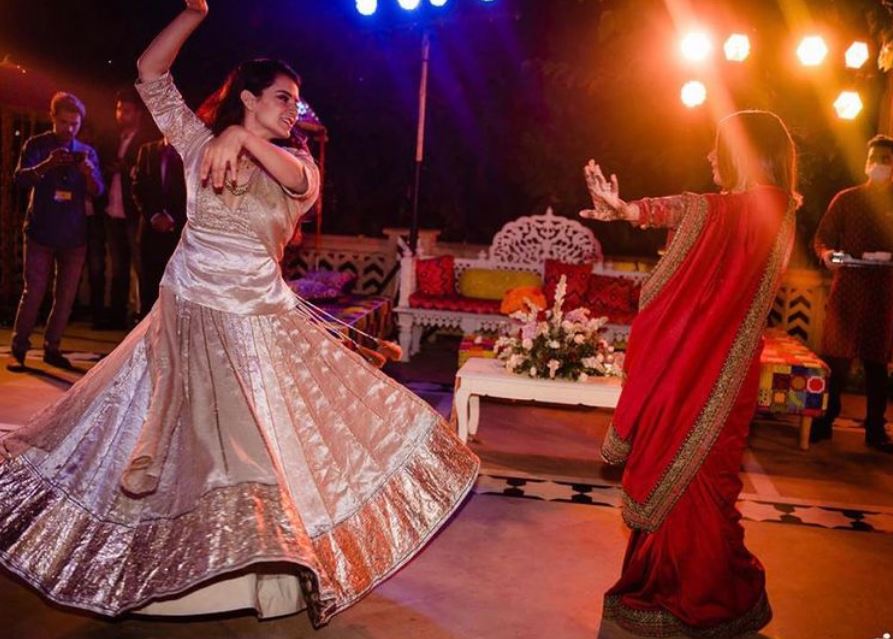 For the haldi function of her brother, Karan Ranaut, Kangana Ranaut had opted for an earthy mauve hued georgette kurta by Rimple & Harpreet Narula which she had paired with a salwar pant. Kangana’s outfit was all about going desi with no modern strings attached and she had accentuated her look with a half-tied hairdo with her long cascading curls left down, which was accessorised with a rose. But what had stood out in Kangana’s look from the ceremony was the beautiful earrings she had worn. Kangana had picked her mother’s vintage earrings for the ceremony, which brought an extra level of oomph in her look. (Also Read: Akshay Kumar Mimics His Wife, Twinkle Khanna's Pose, Her Witty Comeback In The Caption Is Hilarious) 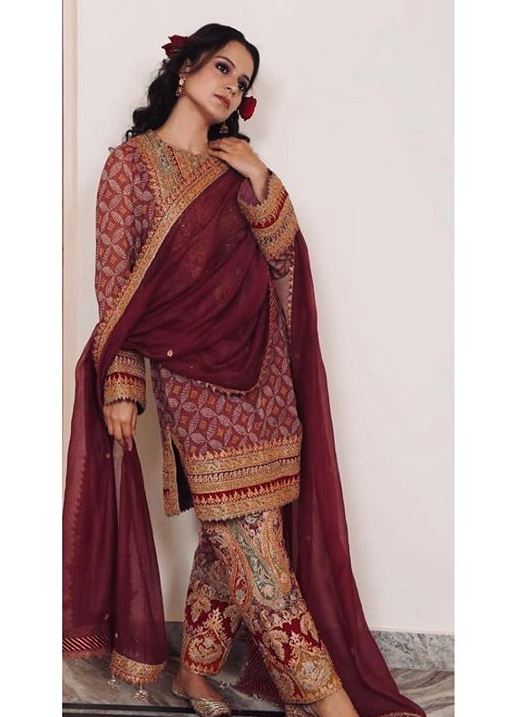 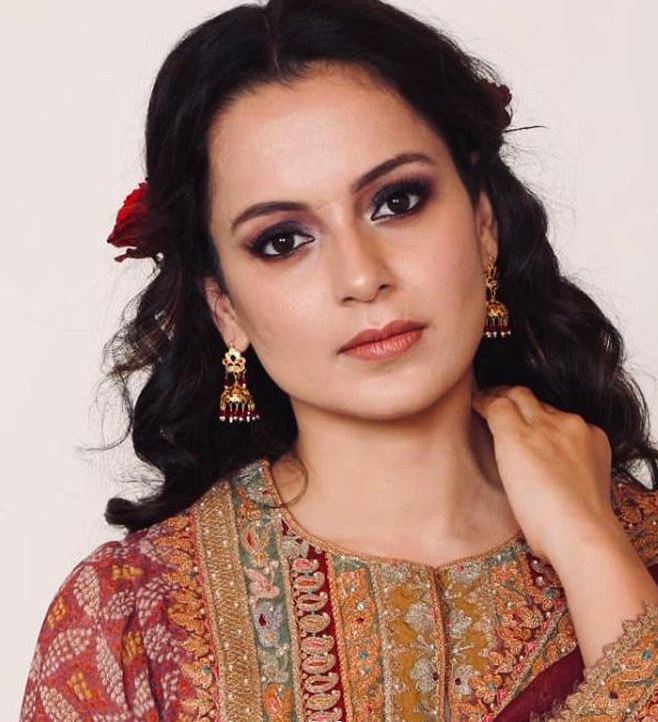 For the Badhai ceremony of Aksht Ranaut, Kangana Ranaut had looked gorgeous in a pear green-coloured silk saree paired up with a sleeveless blouse and a choker and matching earrings enhanced her OOTD. Kangana had opted for a neutral makeup look with nude lips and smokey eyes, and her hair tied into a bun. Her sister, Rangoli Chandel had picked a saree from Kangana’s closet. Rangoli had grabbed our attention in a royal blue coloured handloom saree with flower motifs weaved into it and her look was accentuated with traditional gold jewellery. In the past, Kangana had worn this saree at the launch event of a handloom saree brand. 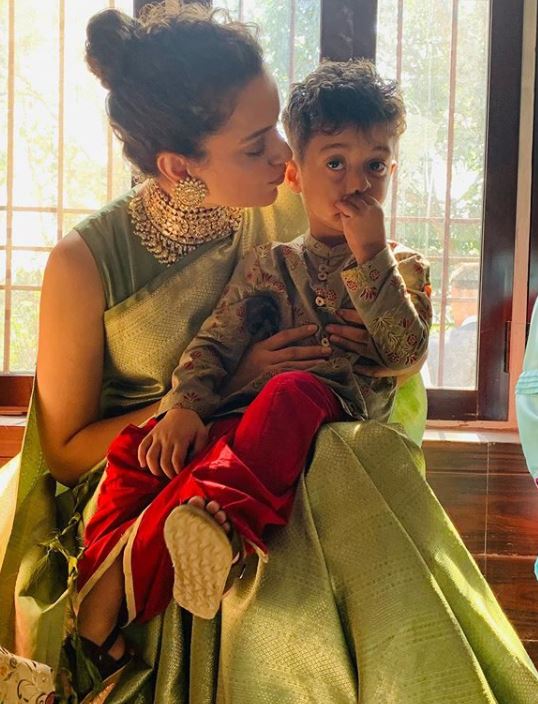 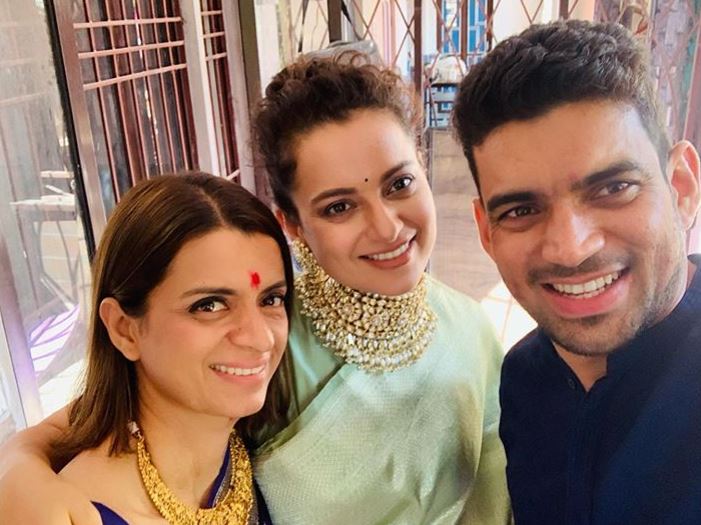 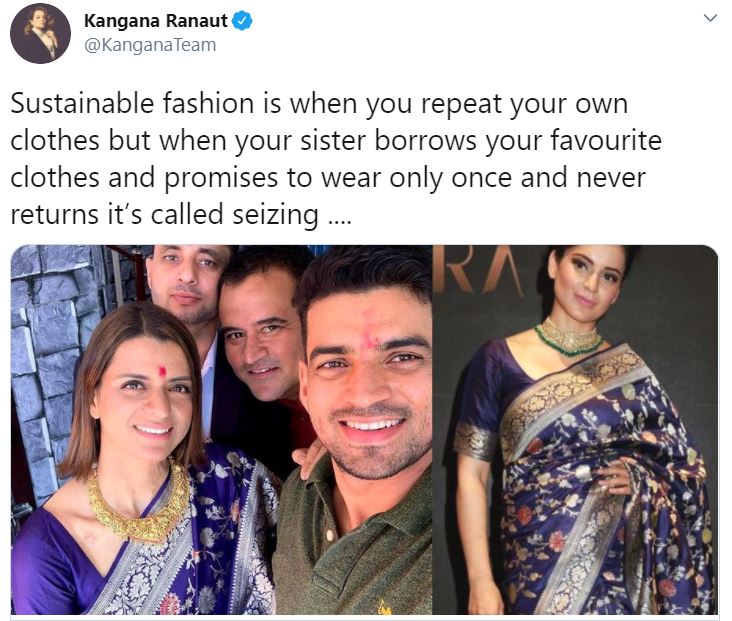 On Raksha Bandhan 2020, Kangana Ranaut had posted a sweet note for her brother, Aksht, reminiscing her childhood with him and how fortunate she feels to have a brother like him. Kangana had written, “Dear Aksht, when we were kids, Papa bought you plastic guns and cycles for me, I played with your guns, and you rode my cycles. I love your sense of humour, and there is never a dull moment with you. I know I have chosen my enemies beyond your reach, but I notice your helplessness when they bully me. I see that silent tear fall when they character assassin me when I challenge the system, parents may scold me and create a lot of noise, but I don't miss you silently stand behind them and conflicted and still. I appreciate you read all the comments under my trailers, and I hate when you get anxious when my films don't open well. Above everything what I appreciate the most is you never show me how much you care. I love you and I am so fortunate to have a brother like you.” (Also Read: Aditya Narayan And Shweta Agarwal Jet Off To Kashmir For Honeymoon, He Shares The First Picture) Share with us your special memory from your sibling’s wedding!