Mouni Roy was lined up to perform at Akash Ambani and Shloka Mehta's wedding. But reportedly, Mouni wasn't willing to cooperate with the security personnel and threatened them to cancel her performance. 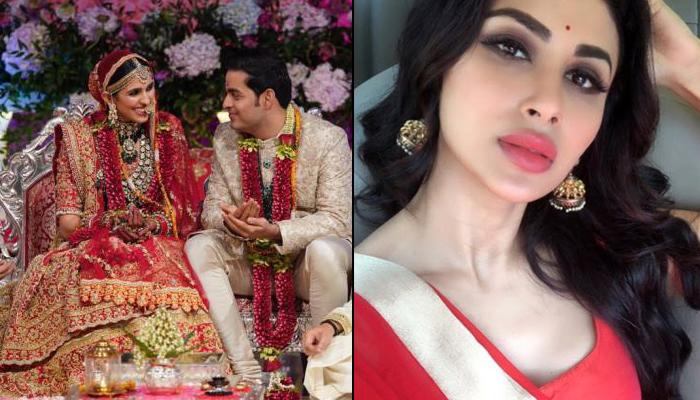 From the lavish three-day engagement festivities to the sumptuous pre-wedding bash in Switzerland, Akash Ambani and Shloka Mehta's wedding has been one of the glorious celeb unions of 2019. The Ambanis and Mehtas left no stone unturned to make Akash and Shloka’s union, a wedding to remember. It’s been a month since Akash and Shloka exchanged their wedding vows, but still, the hangover of #AkuStoleTheShlo wedding doesn’t seem to fade out. (Also Read: Ranbir Kapoor And Alia Bhatt's Awkward 'Kiss' Moment At Zee Cine Awards 2019 Is Too Cute To Handle)

Be it Deepika Padukone-Ranveer Singh, Priyanka Chopra-Nick Jonas or Isha Ambani-Anand Piramal’s weddings, we have seen to what levels these celebrities have gone to ensure tight security on their special days. From providing special wrist bands to the guests at the wedding to sealing the camera lenses of the mobile phones to avoid leakage of any off-guard pictures, celebrities have shelled out on security purposes. Something similar happened at Akash Ambani and Shloka Mehta’s wedding, but there was one guest who created havoc for the Ambanis.

Apart from international sensations, Maroon 5, Coldplay and The Chainsmokers, B-town stars too, performed for the bride and groom at their pre-wedding functions. Amongst many Bollywood celebs, Naagin star, Mouni Roy was too, lined up to perform for Akash and Shloka. But reportedly, Mouni wasn't willing to cooperate with the security guards at the wedding, when asked to get her phone sealed. As per the instructions by the Ambanis, all the guests had to get their phones sealed before entering the venue but Mouni didn't like this request and refused to do so.

As per the report, "Mouni was not at all comfortable with her phone being locked, but the condition was applicable to all the guests at the party and hence she had to agree to it." Mouni Roy finally gave in, but on entering the green room before her performance, she tried to remove the sticker from her phone. When security guards intervened and asked her to put it back on, Mouni lost her cool and started arguing with the security personnel.

Mouni Roy was again warned by the security personnel and she threatened them to cancel her performance at the last minute. A source claimed, "After a long argument, Mouni finally had to give in and of course, as the payments were all made in advance, she had to perform at the wedding and so she did." (Also Read: Pratyusha Banerjee's BFF's Kamya Panjabi-Vikas Gupta Fondly Remember Her On Third Death Anniversary)

Mouni Roy began her career with Kyunki Saas Bhi Kabhi Bahu Thi (2007) and became a household name with her stint in Naagin. She then switched from TV to Bollywood with Gold (2018) as Akshay Kumar’s sharp-tongued Bengali wife. In a recent interaction with a leading media portal, Mouni spoke about her transition from television to the movies and said, “I took the jump because I knew the time was right.” Speaking about her first film, Mouni stated, “I was offered many films before Gold, but I had already made a name for myself in television and I was doing great work. So I knew that the film I was offered had to be great enough for me to give this up and make the transition. If I did one film and went back to television, it would almost be like I was giving up my home for no reason.”

Mouni Roy, in an interview with PTI, shared that her casting as the main antagonist in Ranbir Kapoor and Alia Bhatt starrer Brahmastra came as a surprise for her. Revealing how director Ayan Mukerji felt after seeing Naagin, Mouni was quoted as saying, "I am playing the main villain in the film. I am really looking forward to it. What is more liberating for me is playing different characters that challenge me. I was surprised initially that they wanted me to play the villain. Ayan Mukherji (director) had seen something from Naagin and felt I could play the villain. So, you never know what clicks with whom. As an actor you should be willing to experiment and be versatile otherwise you can't learn and grow." (Also Read: Salman Khan Became A Kid At 'Bhanja' Ahil Sharma's Fair-Themed Birthday Bash, Dances With Cartoons)

On the work front, Mouni Roy will next be seen in Ayan Mukherji's Brahmastra, starring Ranbir Kapoor and Alia Bhatt.