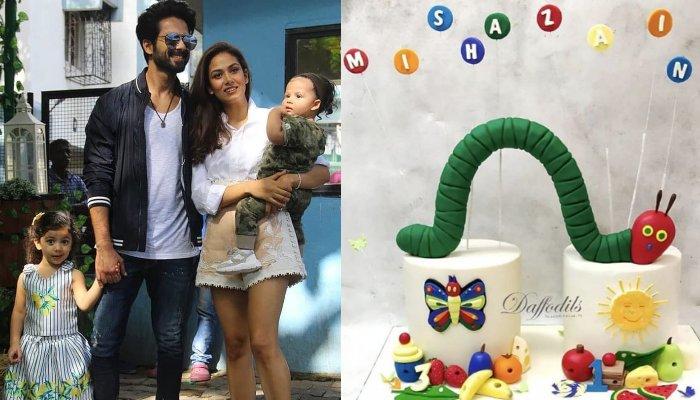 How time flies! To all the elated moms and dads celebrating the initial years of their babies' birth, do you sometimes want to pause time and stop your little one from growing so fast? This time that year, the mommies must have been lying on their hospital beds, almost going into labour and the following year, they would be talking to the caterers about how perfect they want their little wonder’s one-year birthday to be! Well, something similar must have happened with Shahid Kapoor and his wife, Mira Rajput Kapoor, who celebrated their daughter, Misha Kapoor’s third birthday and son, Zain Kapoor, almost one-year birthday, together. (Do Read: Amy Jackson Begins Her Countdown Towards Welcoming First Baby, Enjoys A Splash With Beau In Pool)

Shahid Kapoor and Mira Rajput Kapoor had gotten married on July 07, 2015. As the first year of their marriage turned around, the duo had welcomed their little angel, Misha Kapoor on August 26, 2016, and two years later, on September 05, 2018, baby Zain Kapoor was born to them. And as feasible as it would sound, Misha and Zain’s star parents, Shahid and Mira had hosted a combined birthday party for them yesterday. While we will share more details with you about the same, but first things first! Mira had taken to Instagram yesterday and had shared a picture of an infant Misha, curled up on her blanket, wishing her little princess on her special day. The doting mommy had written, “I love you, my sweetheart. Happiest birthday to my angel, Misha. I pray for your happiness my darling, God bless you always! Thank you for being the light of our lives!”

Shahid Kapoor and Mira Rajput Kapoor had arranged for a noon birthday party for their little ones and every picture that came about had increased our curiosity levels to the utmost! While we will still let that be a surprise for you until the later paragraphs to come, let us give you some updates about the Kapoor fam. Mira, who is still completely smitten by her star hubby, Shahid, took to her Instagram story yesterday and posted a beautiful picture with him. The picture had Shahid and Mira side-hugging one another, wherein she had written the words, “Shahid Kapoor I love you” atop the picture. Her second Instagram story had a gigantic birthday card of Misha and Zain, wherein a cute message, “... and then Misha became a beautiful butterfly and Zain a buzzing bee” was written. Atop her second Insta story, Mira had showered praises for her babies’ birthday planner, “Thank you to my dearest and most talented friend for the most beautiful birthday Misha and Zain could have asked for @shimulmodi.” Also checkout a picture and a screenshot of a video of the entrance of the venue as posted by their birthday planner:

As we have mentioned before, Misha Kapoor and Zain Kapoor’s joint birthday celebrations had begun around noon and their daadi, Neliima Azeem and chachu, Ishaan Khatter too, had attended the party. Post the commencement of the party, a large array of star kids had flooded the occasion with their teeny-weeny presence. Also not to mention, some star kids were accompanied by their star parents too! To name the star babies and stars who had attended Misha and Zain’s birthday party, AbRam Khan, Shahid’s ex’s nanad, Soha Ali Khan, her hubby, Kunal Kemmu and their little one, Inaaya Naumi Kemmu, Esha Deol and Radhya Takhtani, Varun Dhawan's bhabhi, Jaanvi Dhawan and her daughter, Karan Johar’s twins, Yash Johar and Roohi Johar and Rani Mukerji had attended the bash. (Must Read: Sangram Singh Of 'Yeh Hai Mohabbatein' Poses With His Newborn, Wife's Birthday Wish Is Pure Love)

What is the most exciting thing about birthdays? Birthday cakes, right? Well, Misha Kapoor and Zain Kapoor too, had their own yummilicious birthday cake for their third and ‘almost first’ birthday cake respectively, and it looked divine! The joint cake also had a big bright caterpillar hop from one cake to the other and an array of fruits, cheese and chocolates looked sumptuous at the bottom. Celebrated cake designer, Daffodils Creations were bestowed with the responsibility of creating Misha and Zain’s caterpillar-themed birthday cake. Sharing two similar pictures of the cake, the description said, “A joint celebration Cake for Zain's 1st and Misha Kapoor's 3rd Birthday in 'The Hungry Caterpillar' theme. Thanks, @mira.kapoor for the opportunity. It was a pleasure to do the Cake for this special occasion. Flavours - Vanilla Strawberry Creamcheese and Belgian Chocolate with Hazelnut Praline.”

When a second child arrives in a family, most of the attention gets diverted to the newborn, which might make the first child feel neglected. In February 2019, Mira Rajput Kapoor had conducted an ‘Ask me anything’ session on Instagram which allows users to ask questions. And it was then when a follower had asked her “How did you prepare Misha for a sibling?” and Mira had given a hands-on answer. Revealing all the secrets and which song Misha sings for her baby brother, the doting mommy had shared, “We spoke to her about it a lot. Read a lot of storybooks to her (Topsy and Tim and the New Baby became a favourite of hers), and let her feel a part of the process even till now! Help around, bring mom a glass of water or sing wheels on the bus to Zain if he’s crying. We let her feel the baby is hers to take care of so she felt like a grown-up little helper.”

Speaking about making Misha Kapoor feel equally important after she had a sibling, her mommy, Mira Rajput Kapoor had earlier shared, "This time I already have a toddler around and keeping a balance between the one you have and the one that's on its way is very important. Everything changes, and you don't want that the one who has been the apple of your eyes for so long and feels that she's the centre of your world to feel neglected and ignored. That is very important.” (Also Read: Chhavi Mittal Shares A Beautiful Sister-Brother Moment Of Areeza And Arham, Talks About Their Bond)

We can’t agree more! Guys, how did you like Misha and Zain’s joint birthday celebrations? Keep us posted!