Misha Kapoor and Zain Kapoor treated their fitness freak mama, Mira Kapoor with a healthy salad. Not only did they make the salad on their own, but they also fed it to Mira.

It is rightly said that kids learn and observe what they see instead of what you tell them to do and to teach them the right values and good habits, parents need to follow it themselves for their little ones to copy. A perfect example of the same is Shahid Kapoor's wife, Mira Rajput Kapoor and their kids, Misha Kapoor and Zain Kapoor. One look at Mira and no one can say that she's the mother of two kids like the way she has maintained her fit self, enjoying her journey of wellness and fitness is commendable. Looks like just like Mira, her little babies, Misha and Zain too, enjoy a healthy lifestyle, proving that the star-wife has been a perfect role model for them.

Also Read: Raj Kundra Wishes Viaan Raj Kundra On 9th Birthday With A Video Of Precious Moments Since His Birth

Just like Mira Rajput Kapoor, her know-it-all daughter, Misha Kapoor is a social media sensation with her on-point style game and not only does the little one has followed the footsteps of her mother when it comes to fashion and culinary, the star-wife has also incredibly passed on the values and teachings of life to her kids. On Mother's Day 2021, Misha and her baby brother, Zain Kapoor had surprised their mama, Mira with a handmade card and yummylicious heart-shaped chocolate cake. Mira had captioned her Mother's Day post as "You two are my whole heart... a small little piece for Papa. I love you my babies." Misha and Zain's chachu, Ishaan Khatter had commented on the post, "The ulta 'Z' has my heart" followed by heart and awe-struck emojis. 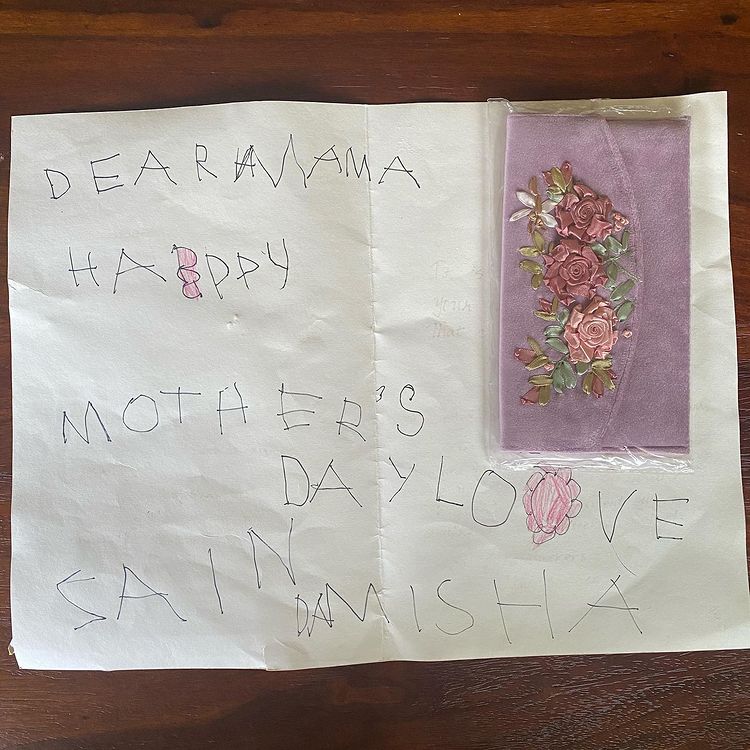 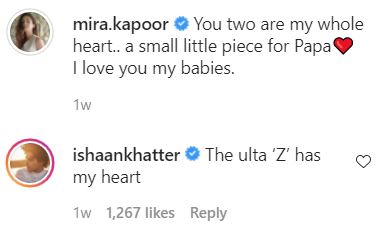 Looks like the Mother's Day pampering will be continuing for Mira Rajput Kapoor all month long as now the star-wife has given a glimpse of another sweet gesture by her little ones, Misha Kapoor and Zain Kapoor. Misha and Zain treated their fitness freak mama, Mira with a healthy salad that includes slices of cucumber, tomatoes and grated carrots. Not only did they make the salad on their own, but they also fed her. Just like Mira believes in bringing nutrition and taste together on a plate, Misha and Zain, following her footsteps, made her impressed with their healthy meal. Mira wrote, "My babies made me a salad and fed me. I must've done something right" followed by a heart emoji atop it. 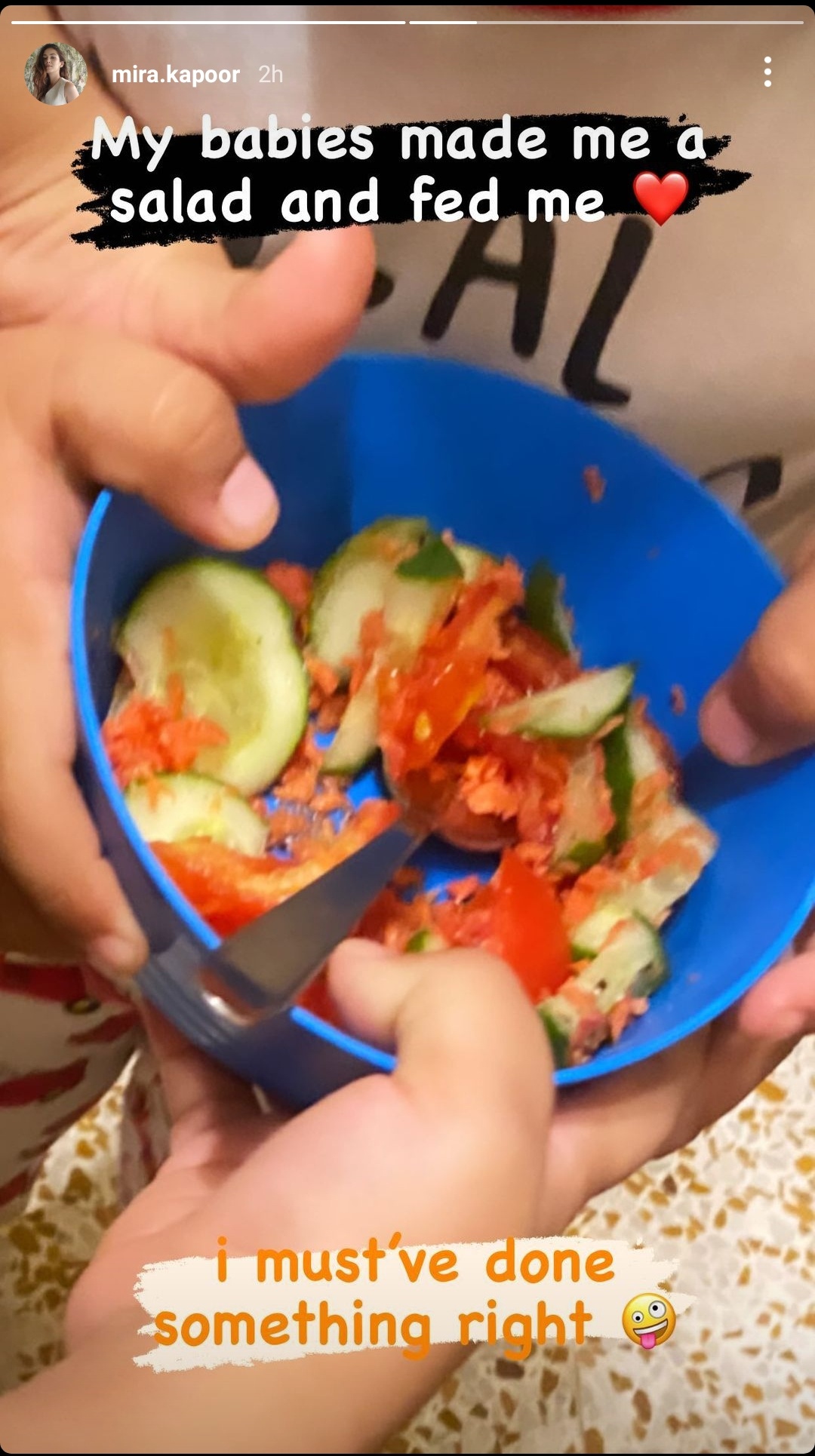 Misha Kapoor is not just fascinated with jewellery, but she is keenly following the footsteps of her mama, Mira Rajput Kapoor in the kitchen too. A few weeks ago, Mira had posted a picture of a yummylicious chocolate cake made by her talented daughter, Misha, who often dons the baker's hat. Revealing how it is always a Valentine's Day for her hubby, Shahid Kapoor as Misha showers him with love and that Zain prefers Spiderman over her, Mira had written, "It's always Valentine's Day For papa only because baby boy prefers spiderman over me. #MissyTheBaker" atop the picture of a heart-shaped cake. 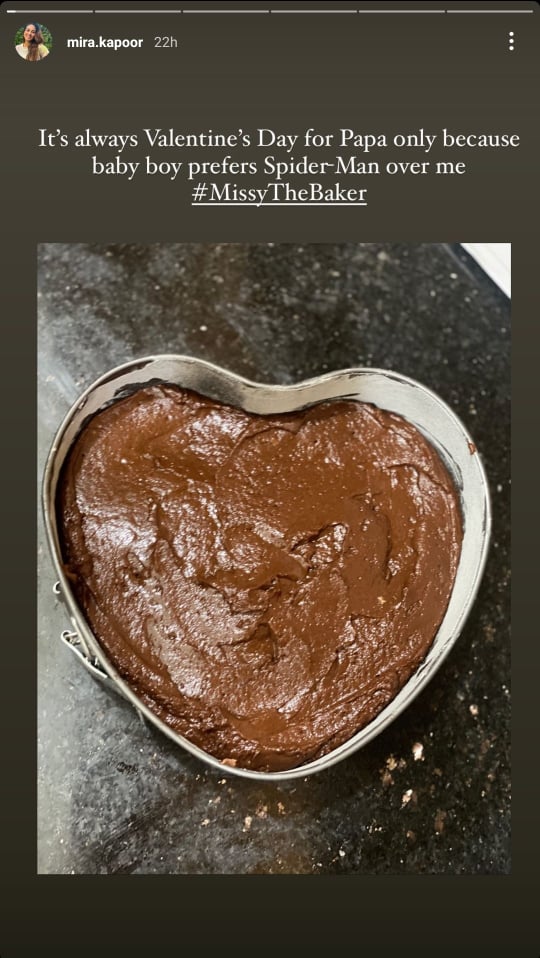 Also Read: Jankee Parekh Swings On Swing With Sufi On Which She's Been Swinging Since Birth, Relives Childhood

Do you remember the story of Goldilocks and the Three Bears? After becoming a wife and a mother to two kids, Mira Rajput Kapoor understands why papa bear's porridge was piping hot, baby's was perfect and mother bear's a cold one. Mira's IG story could be read as "Ever notice in the story of the 3 bears, papa bear's porridge is piping hot, baby's is perfect and mother bear's is cold? I get it now." Isn't it relatable to every mother out there? 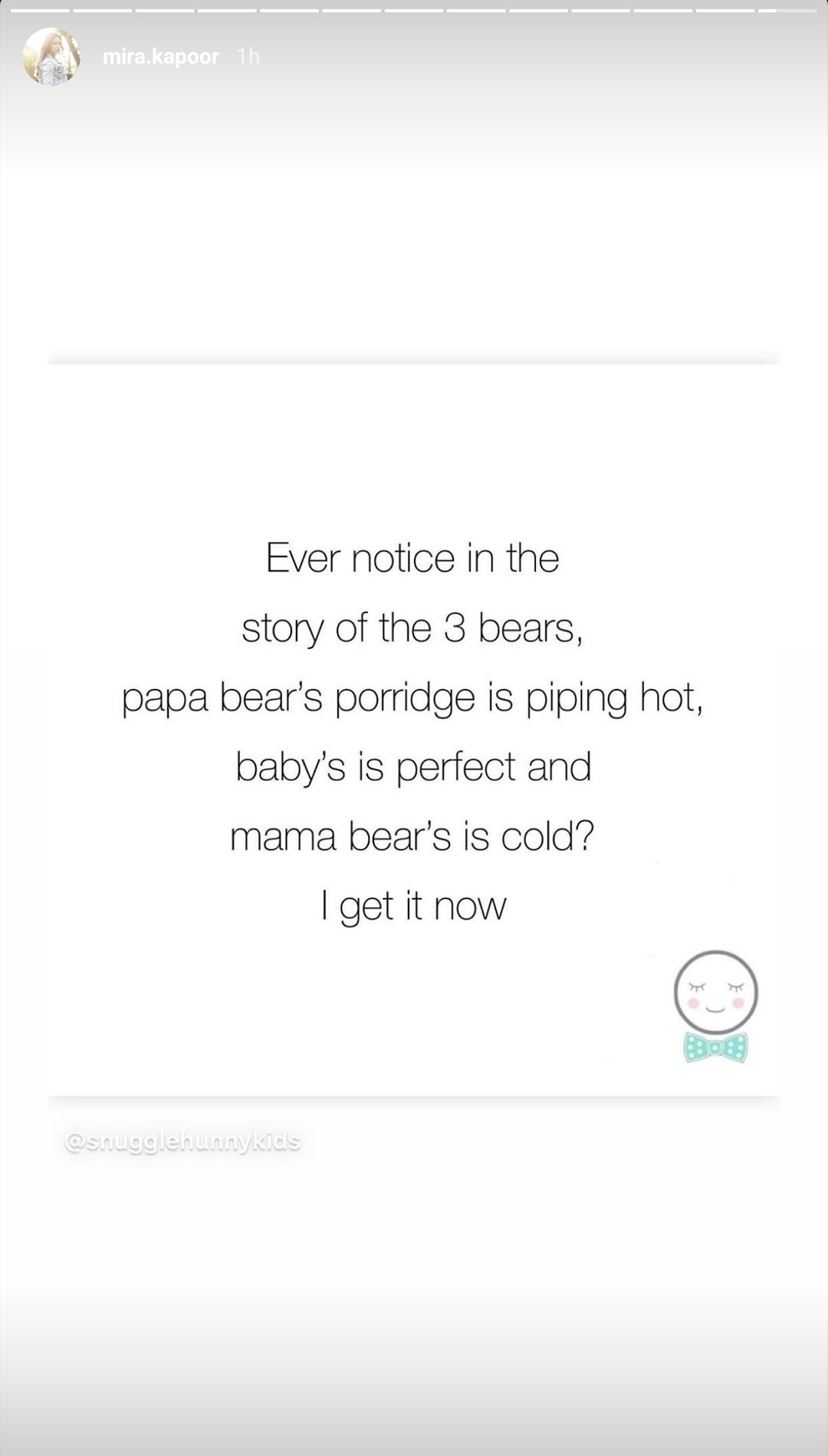 In a throwback interview with Pinkvilla, Mira Rajput Kapoor was asked whether ice-creams are allowed in her house in winters and if not, then what substitute she uses to curb Misha Kapoor and Zain Kapoor's sweet cravings. She had retorted, "Winter does come with festivities and some fun days, therefore I don't restrict them completely from having ice cream and let them indulge in the same every once a while. But more than ice cream, I indulge their sweet teeth in homemade gajar ka halwa or a hot chocolate or even a homemade cake but I do prefer making whatever I can at home and sometimes even make it into an activity for the kids. I also believe indulgence is good but with a touch of healthy ingredients, like adding a pinch of cinnamon in our hot chocolate and replacing sugar with jaggery. A small change can go a long way!" Mira is one lucky mother to have two so thoughtful and adorable babies!