Ishaan Khatter’s latest film 'Khaali Peeli' released on OTT and has been receiving positive reviews from the audience. His ‘bhabhi’, Mira Rajput Kapoor has the sweetest reaction to his film. 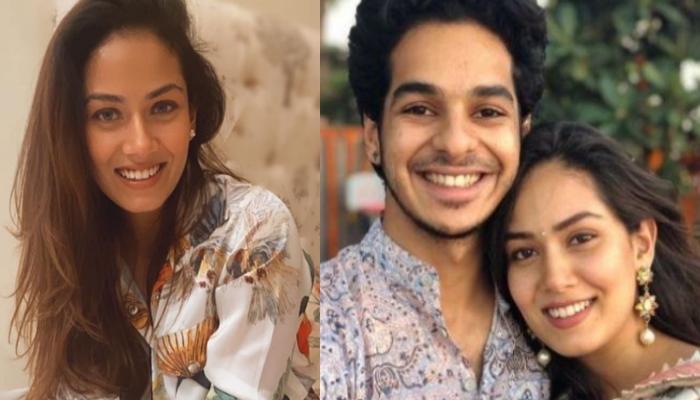 Just like his elder brother, Shahid Kapoor, Ishaan Khatter had also proved his mettle in acting when he had made his acting debut in 2017 with Majid Majidi’s film, Beyond The Clouds. After the critically acclaimed film, the handsome actor had gone on to become the dhadak of the entire nation when he had starred in the film, Dhadak opposite the gorgeous Janhvi Kapoor. With his stellar performances in both the films, Ishaan had proved that acting is in his genes. Ishaan’s latest film, Khaali Peeli has released on the OTT platform recently and his bhabhi, Mira Rajput Kapoor has the sweetest reaction to it. (Also Read: Dimpy Ganguly Takes Son, Aryaan Roy For His First Movie, Shares Adorable Pictures Of Her Family)

Ishaan shares an adorable bond with his bhabhi, Mira Rajput Kapoor. The bhabhi-devar duo has always won our hearts with their cute camaraderie. When Mira had celebrated her 26th birthday on September 7, 2020, her devar, Ishaan had a millennial wish for her. Taking to his IG story, Ishaan had posted an unseen picture with Mira Rajput wherein, the two can be seen donning ethnic outfits. And just like the cool picture, Ishaan had wished his bhabhi with a cool millennial term. Sharing the picture, he had written, “Happy birthday bhaabidooooo @mirakapoor” followed by red heart emoticon. 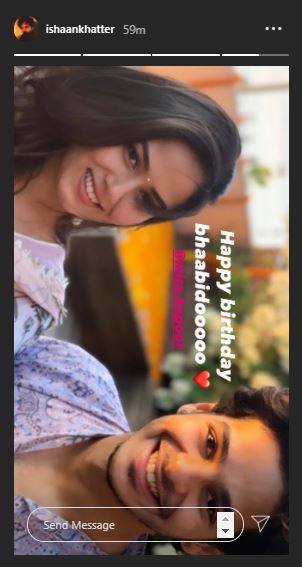 Ishaan Khatter’s latest film, Khaali Peeli opposite Ananya Panday was released on OTT on October 2, 2020. The film has received positive reviews from the audience but it was his bhabhi, Mira Rajput Kapoor’s reaction that was unmissable. On October 3, 2020, Mira took to her IG stories and shared a still from the movie and wrote, “Watch Khaali Peeli on @Zeeplexofficial! @Ishaankhatter" followed by a heart emoticon. Take a look: 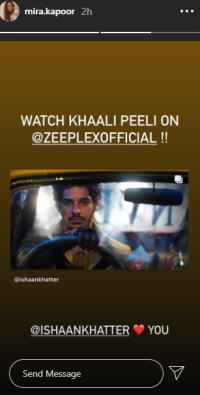 When Ishaan Khatter had bagged the Filmfare Award for Best Debut in 2019 for his film, Beyond The Clouds, Ishaan had not only made the nation proud with his exceptional performances, but bhai and bhabhi were equally proud. Ishaan’s brother, Shahid Kapoor and sister-in-law, Mira Rajput Kapoor had taken to their Instagram handles and had posted a congratulatory note for the Beyond The Clouds star. While Shahid had shared a still from the film, Beyond The Clouds and had tagged Ishaan followed by a clap emoji, Ishaan’s ‘bhabhidoll’, Mira had posted a photo of Ishaan holding the black lady. Mira had written, “Congratulations @ishaankhatter You make us so proud!” atop it. (Also Read: Rocky Jaiswal's Monochrome Photos With Hina Khan To Mark Her Birthday Reflect Their Everlasting Love)

On July 7, 2020, Shahid and Mira had completed five years of married life and Ishaan Khatter had posted a picture, wherein, Shahid could be seen giving a sweet peck on Mira's forehead as they had posed in traditional outfits on the terrace of their residence. Ishaan had written, “Turned 5!” followed by a heart emoticon and five stars atop it. Mira had reposted the picture and had revealed that Ishaan is the only one who calls her 'bhabhi'. Mira had written, "@ishaankhatter the only one who calls me bhabhi". When he had made an appearance on Voot's Feet Up with the Stars Season 2, he had poured buckets of praises for Mira. He had talked about his relationship with her, and had stated, "Mira is just one year older than me and she is a hands-on mother. She has taken over family responsibilities perfectly." Sometime back, Ishaan had indulged in an impromptu 'Ask Me Anything’ interaction with Insta-fans, and his ‘bhabhidoll’, Mira Rajput Kapoor too had posted a question for him. Mira had asked her devar, Ishaan, “When are you getting a haircut?” to which Ishaan had retorted, “Now, no chance I’ll get one. @mira.kapoor”. (Also Read: Priyank Sharma Gives Birthday Kiss To Bae Benafsha Soonawalla, She Shares Inside Pictures From Party) 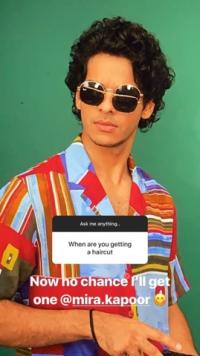 Aren’t Mira and Ishaan the best bhabhi-devar duo of Bollywood? What do you think? Let us know. Mira Rajput had married Bollywood actor, Shahid Kapoor on July 7, 2015, and apart from adding Kapoor to her name, she had entered into the lives of millions of his fans. Every Shahid Kapoor fan was glued to their TV sets to get a glimpse of their wedding and the