As Mehr Dhupia Bedi is obsessed with Mickey Mouse, her parents, Neha Dhupia and Angad Bedi have turned their house into a Mickey Mouse club for her second birthday. Â

What can parents pray for their child other than happiness, well-being, love, warmth and everything good! Parents are hard-wired to protect their child and chant for the happiness of their little wonders. They ensure that their baby gets everything they dream of and even much more than that. And the same approach works when it is their child’s birthday as they serve everything on the table that their child loves. As Mehr Dhupia Bedi is obsessed with Mickey Mouse, her parents, Neha Dhupia and Angad Bedi have turned their house into a Mickey Mouse club for her second birthday. (Also Read: Tara Jay Bhanushali Is Sick, Her Bro, Rajveer Pampers Her With Kisses, Mom, Mahhi Shares A Glimpse)

For the unversed, on May 10, 2018, in a low-key Anand Karaj wedding, Neha Dhupia and Angad Bedi had tied the knot, leaving their fans in a sweet state of surprise. It was speculated that the couple was pregnant when they had tied the knot, and after 6 months of their wedding, Neha and Angad had welcomed a little doll into their lives, whom they have named Mehr Dhupia Bedi. Two days after Mehr's birth, Angad and Neha had posted the first glimpse of their baby girl introducing her to the world. As they say, time runs the fastest and now Neha and Angad’s little girly has turned 2 years old and the parents cannot keep calm!

On Mehr’s 2nd birthday, Neha and Angad are sure going to plan something grand. As the family of three is in ‘Bedi Abode’ for Mehr’s birthday as mentioned in Neha’s IG stories, we are waiting for the birthday pictures to come out soon. Well, till then, the mommy, Neha Dhupia has penned a gorgeous birthday wish for her now-2-years-old daughter, Mehr with some stunning pictures from their post-lockdown Maldives vacation. With some surreal pictures, Neha penned her blessings and wishes for Mehr and wrote, “Our little baby girl... may you always be curious, sing even if you don’t know the lyrics, dance like no one is watching, forever be eager to learn, chase butterflies, spread joy wherever you go, light up the room with your adorable smile and roar the loudest caus deep down you will always be our little simbaa! #happybirthday our doll @mehrdhupiabedi.” Other than this, Neha also shared a Boomerang of Mehr’s daddy, Angad holding Mickey Mouse toys as she wrote, “It’s a Mickey Mouse house clubhouse… @angadbedi @mehrdhupiabedi” atop it. Take a look:

Daddy, Angad Bedi also joined in Mehr's mother, Neha to wish his little girl as he made a super special birthday post for her, exactly on the time she was born. Sharing two 'Father-daughter' moment pictures with Mehr, Angad revealed that Mehr was born at 11:25 am and they are lucky to have her. He wrote, "Today at 11:25 am you were born to us..Happy birthday to our baby girl “Mehr” she turns 2 today. Our lives have been a blessing since you arrived. We are lucky to have you. Thank you for choosing us as your parents. @nehadhupia #satnamwaheguru forever grateful." Take a look:

Mehr is obsessed with Mickey Mouse and her love for them is evident from Neha and Angad’s social media handles. A proof of the same we had witnessed on September 26, 2020, when Mehr had left the house in search of Mickey Mouse. Neha Dhupia had taken to her IG stories to share glimpses of how perfectly Angad Bedi had performed his papa duties. She had shared two Boomerang videos on her IG stories sharing how her daughter, Mehr had left the home in the search of Mickey and how her father had come to her rescue. In the first video, Mehr could be seen in an all-white outfit walking on the road holding her teddy bear and her mumma bear, Neha Dhupia had written, “Finding Mickey Mouse @mehrdhupiabedi @angadbedi” atop it. In the second video, Mehr could be seen running and Angad could be seen walking in the direction of his daughter. Neha Dhupia had written, “Papa To The Rescue.. @angadbedi @Mehrdhupiabedi” atop it. (Also Read: On Nayanthara's 36th Birthday, Her Boyfriend, Vignesh Shivan Shares A Cutesy Wish, Calls Her 'GOLD')

When Mehr had turned 1 year old, on November 18, 2019, to mark this big milestone in their lives, Neha and Angad along with Mehr had headed off to Amritsar to seek God’s blessings. Neha and Angad had posted glimpses of their visit to the Golden Temple and while the former had captioned her pictures as “Guru ‘Mehr’ Karein ... #satnamwaheguru #darbarsahib #goldentemple” the latter had written, “With our little blessing... guru Hamesha ‘Mehr’ Karein... #satnamwaheguru @lakshaysachdevaphotography.” (Recommended Read: Arpita Khan Sharma Recalls Her Beautiful Journey With Aayush Sharma On Their 6th Wedding Anniversary) 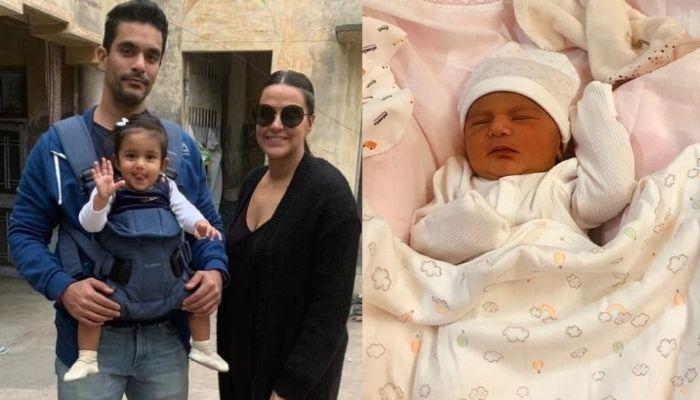 Becoming parents is a full-time job and requires you to give in all your time. Sleepless nights, feeding the baby, changing the diapers and taking care of them is a part of becoming parents. However, it takes a little while for the parents to adjust and accept the changes. Sure,