As Mandira Bedi has taken her kids, Vir and Tara on a staycation, it looks like Tara is trying to learn her mommy's fitness routine as she tries to imitate her. Check out the video inside! Mandira Bedi had married filmmaker, Rraj Kaushal on February 14, 1999, and after 12 years of married life, the couple was blessed with a baby boy, Vir on June 17, 2011. Mandira had always presented her wish to adopt a child and it was two years back that the couple had applied for adoption at the CARA (Central Adoption Resource Authority) which is the central adoption agency under which all adoptions across the country take place. On the auspicious occasion of Dussehra, the couple had adopted a baby girl into their lives, whom they have named Tara Bedi Kaushal. And since then, she has been sharing glimpses of her little angel. (Also Read: Kapil Sharma Shares A Cutesy Photo Of Daughter, Anayra, Reveals Who Gifted Her First Diwali Outfit)

Once you have a passion for something, you find it hard to give up on it. Mandira Bedi is a fitness enthusiast and she finds it hard to skip her regime to stay fit. As she has taken her kids, Vir and Tara on a staycation, it looks like Tara is trying to learn her mommy's fitness routine. Scroll down to know more!

Mandira Bedi is 48, but one look at her and no one is going to believe that she is a year older than twenty. She has toned herself and maintained her body so well, thanks to her fitness routine that we always wonder if we had a chance to be under her guidance and start our path towards fitness. Well, we are sure not lucky enough, but her daughter, Tara has been blessed with her mother, Mandira Bedi’s guidance. As Mandira and Tara are on a staycation with Vir in Mumbai, the darling mommy took to her IG handle and shared a video, showcasing how she is including Tara in her routine. In the video, we can see Mandira exercising and her little daughter, Tara trying to imitate her mommy’s action and looking like a goofball. Sharing the video, Mandira wrote, “#JacksBack and he is by the pool.. #drivetophuket.”

The doting mommy, Mandira is doing her best to pamper her daughter, Tara and make her feel comfortable and familiar with their lifestyle. A few days back, the mommy had taken her two kids, Vir and Tara on a staycation at JW Marriot, Mumbai and three of them are enjoying it to bits as seen in the never-ending pictures shared by Mandira. On November 19, 2020, taking to her IG handle, Mandira had given glimpses of their staycation, from her kids dancing with excitement to them posing for the camera, we were in awe of their bond. Mandira had also twinned with her kids, Vir and Tara in a white t-shirt with black stripes. (Recommended Read: Kapil Sharma And His Wife, Ginni Chatrath Are All Set To Welcome Their Second Child In January 2021)

In an interview with the Mid-Day, Mandira had opened up on striking the work-life balance and diverting her time to her two kids, Vir and Tara. The actress had shared that she is trying to give more time to her son, Vir, so that he doesn't get jealous of Tara. Mandira had shared, "As a parent, I have had to strike a new balance. Vir told me the other day, "I feel jealous when you tell her, 'good girl'." So, I am now paying him more attention too. I decided to take a few courses on parenting, and they have given me new ways and tools to deal with the change in our lives. I play a game called Secret Box where you put 15 to 20 items in a box, put a timer on, and just be with the child. I do this with both my kids. Vir usually chooses the colour pencils and creates art. Tara goes for the play dough. Nobody else but the child and I are together at this time." (Recommended Read: Sushmita Sen Receives Bestest Gift From Daughter Renee As She Makes Her Acting Debut In 'Suttabaazi')

We can see another blooming fitness enthusiast in Tara! 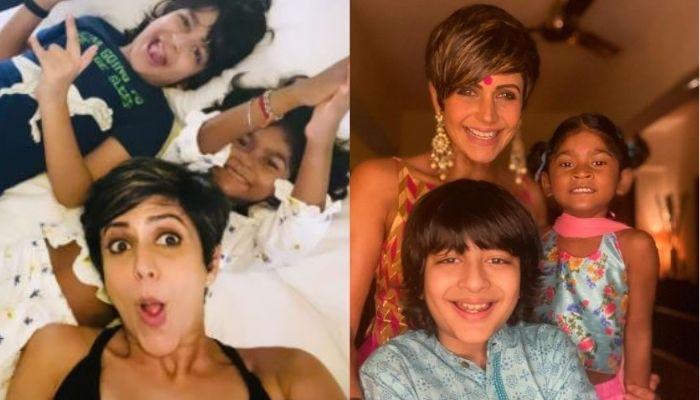 Who would not remember the shy, girl-next-door, 'Preeti' in Shah Rukh Khan’s mega-blockbuster film, Dilwale Dulhania Le Jayenge? Yes, that shy girl has become an inspiration for the whole nation and an epitome of woman empowerment. We are talking about none-other-than Mandira Bedi, whose fitness enthusiasm will drive you to