Kapil Sharma shared an adorable picture of his daughter, Anayra, revealing, who gifted her, her first Diwali outfit. Scroll down to know more!

When a child is born in a family, not only the parents but the life of the entire family takes a U-turn. Massi, mama, bua, chachu, everyone gets busy pampering the little munchkin in one way or other. However, the massive change comes in the lifestyle of a father. Believe it or not! True, that a mother does everything and changes her life completely, but she is already prepared for it. However, a father changes himself the moment he holds his little world in his hands. Something similar has happened with the comedy king, Kapil Sharma. (Also Read: On Sushmita Sen's 45th Birthday, Her Brother, Rajeev Sen And His Wife, Charu Asopa Share Cute Wishes)

We can see an evident change in Kapil Sharma's life since he had embraced fatherhood in December 2019. His wife, Ginni Chatrath had given birth to the future star of ‘Sharma-Chatrath’ family, Anayra Sharma on December 10, 2019, and it was the elated daddy, who had shared the good news with his fans on social media. A month later, Kapil had finally introduced his baby girl to the world. Sharing his baby girl's picture, Kapil had revealed her name in the caption, which had stated, "Meet our piece of heart “Anayra Sharma”.” As it was Anayra’s first Diwali on November 14, 2020, the dotting daddy, Kapil had shared a series of pictures with the Sharma family and Anayra’s outfit had stolen the thunder. We were in awe of Anayra’s black kurta and Afghani pyjama as she was giving desi vibes, dressed as a Punjabi kudi. Now, Kapil has shared a picture of his little princess and has revealed, who got her that gorgeous outfit. Taking to his IG stories, Kapil shared a picture of Anayra, sitting on the bed, looking like a cutie-patootie and her cheeks looking like the most edible thing. Along with the picture, daddy, Kapil shared that the baby girl’s stunning outfit was a gift from her maami and maasi. Sharing the picture, Kapil wrote, “Thank you maami n Maasi for this beautiful outfit.” Take a look: 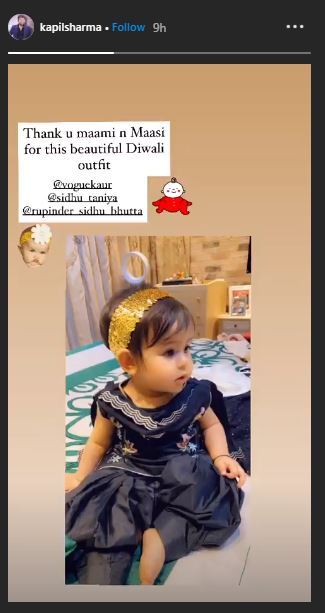 If we talk about Sharma’s first Diwali celebrations with their little princess, Anayra, then daddy, Kapil Sharma had posted an array of family pictures to wish his fans. The gorgeous family had twinned in black ensembles, and baby Anayra's cute ethnic avatar had stolen our hearts. Kapil had captioned the pictures as "A very Happy Diwali from me and my family to you and yours. #diwali #celebrations #family #smile #happiness #blessings #gratitude." (Don't Miss: Varun Dhawan And GF, Natasha Dalal's Unseen Vacation Picture From Goa Shows Their Love For Dogs) 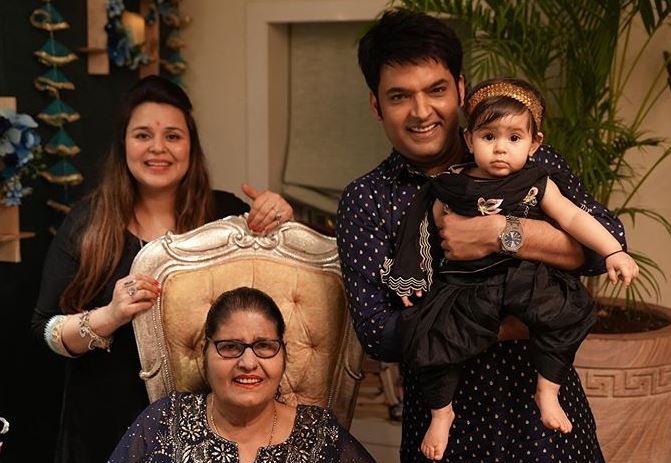 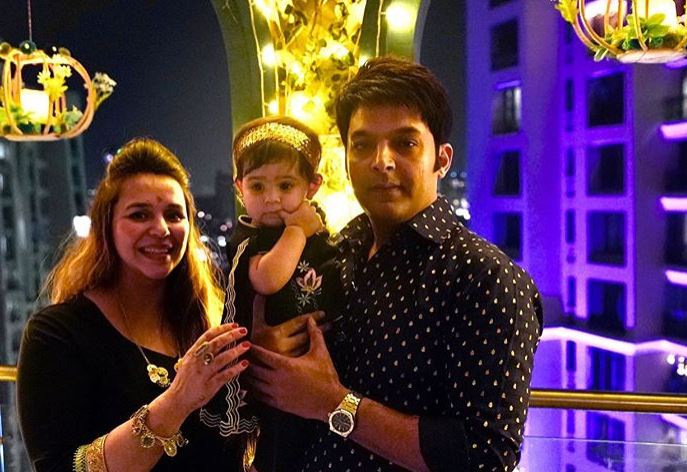 The Sharma family is ensuring that Anayra’s every occasion becomes extra special for her and she makes for a baby fashion influencer. It was Anayra's first Durga Ashtami in April 2020, and her doting daddy had posted adorable pictures. Baby Anayra was all smiles for the camera in a pretty pink and yellow lehenga and had looked adorable with a pink hairband, bindi, teeka, and bangles. Kapil had captioned the pictures as “Jai mata di #ashtami #kanjakpoojan #daddysgirl #anayra #daughter #3monthsold #gratitude.” 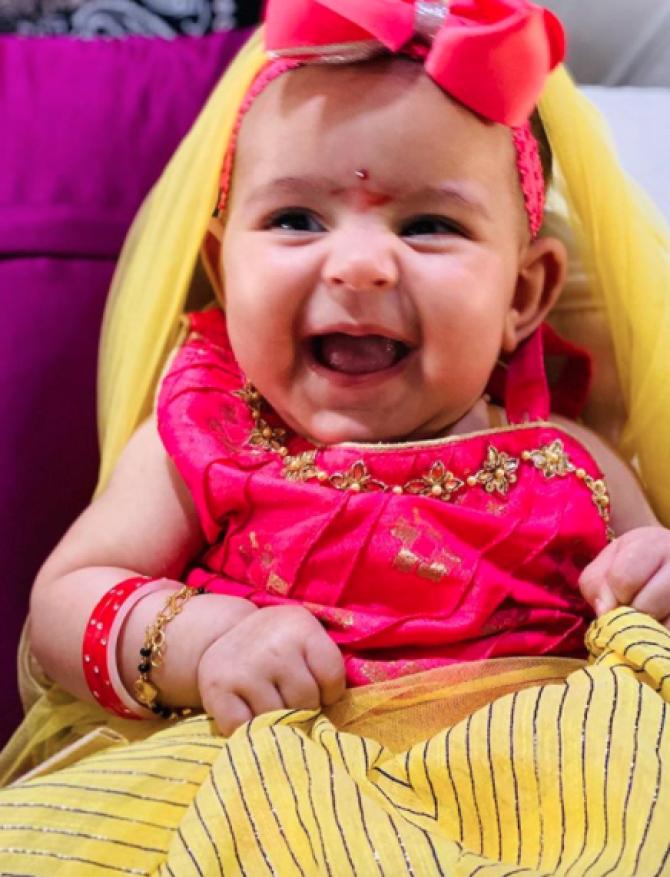 In an interaction with The Times of India, Kapil Sharma had talked about parenting and how his life has changed since the birth of his daughter, Anayra. Kapil was asked about the new phase of his life, fatherhood. Talking about the gradual change from being single to married to fatherhood, Kapil had said, “Yes, it is life-changing. Earlier, when I was a bachelor, life was different. Main yaar-doston ke ghar pe hota tha, ya woh mere ghar pe. Mehfil lagi rehti thi. All that changed after marriage, and I started spending more time at home with my wife, Ginni. And now, after the baby’s arrival, it has changed even more. A baby brings in surprises into our life every day. After marriage, our conversations were about each other, lekin baby ke hone ke baad, everything is centered around her.” (Recommended Read: Rashami Desai's Stunning Photoshoot With Her Mother, Rasila Desai Is About The Power Of Motherhood) 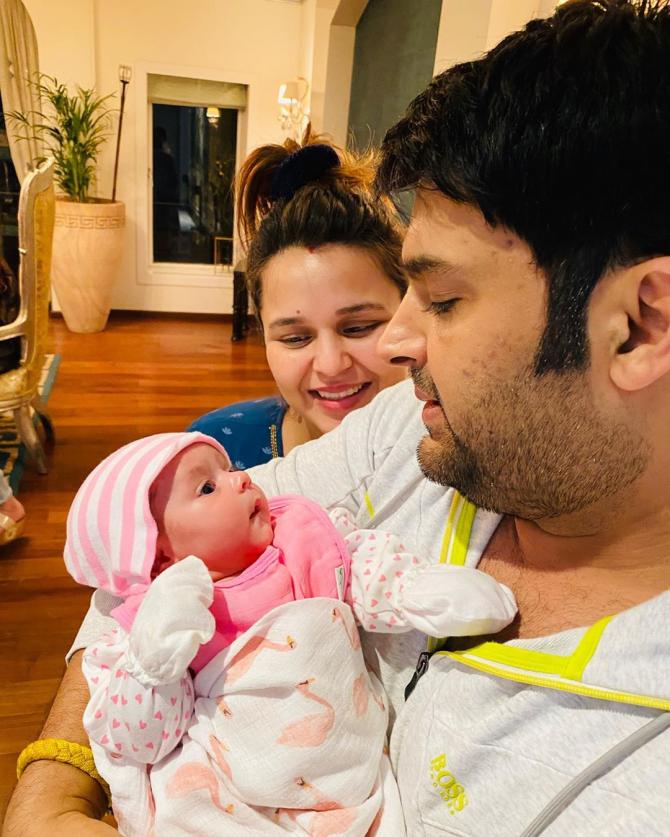 Didn’t Anayra look like a munchkin in her Diwali outfit? 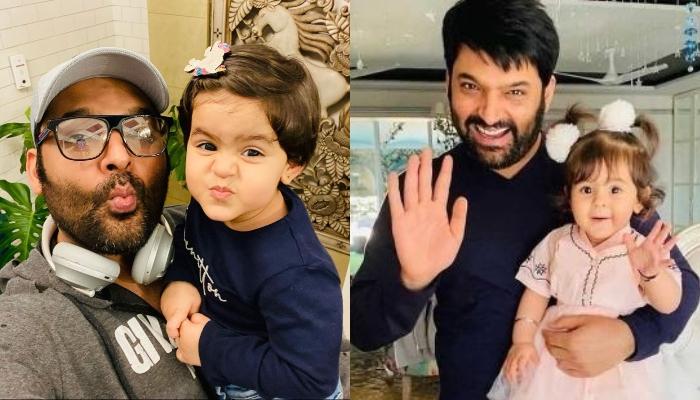 Popular comedian, Kapil Sharma had tied the knot with Ginni Chatrath in a grand ceremony on December 12, 2018.  The couple is blessed with two kids, Anayra Sharma and Trishaan Sharma. Kapil is a perfect family man and loves to spend quality time with his family. He never skips a chance to shower his