You have seen her as the lead actress in Raj Kapoor’s 1985 film, Ram Teri Ganga Maili and as a standee in Kapoor and Sons (2016) portrayed as Amarjeet’s (Rishi Kapoor) fantasy. Yes, you guessed it right! We are talking about Mandakini. An unknown girl from Meerut became an overnight sensation in India when Raj Kapoor cast her in his seminal movie opposite Rajiv Kapoor.

Mandakini had been rejected by filmmakers thrice before Raj Kapoor spotted her talent and her stunning green eyes, which could alone do the acting for her. Who would have known then, that an actress rejected by many leading producers and directors, would one day appear in more than 50 Hindi films and become one of the most popular actors in 1980s and 90s? But behind this successful run in the Hindi film industry lies her intriguing love life. So, let’s explore Mandakini’s love life for you guys. 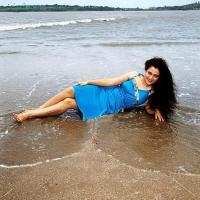 As the lead actress in Ram Teri Ganga Maili, Mandakini (born as Yasmeen Joseph) had two sensuous scenes in the film which stirred the whole industry (one, in which she is bathing under a waterfall clothed only in a white saree and two, in which she is shown breastfeeding her child). Some alleged that Raj Kapoor totally exploited her ‘physical assets’ for his film. On this, Raj Kapoor had once said:

“If Federico Fellini shows nude women in Amarcord, it is called art and wins awards at premium festivals. If I dare to go towards nudity, it is called exploitation and voyeuristic”. 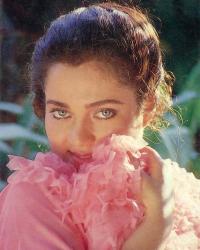 But soon after the film’s release and its earth-shattering box-office performance, Mandakini gained the limelight and was only offered ‘dare-to-bare’ roles. Eventually, people started calling her the ‘sex siren of Bollywood’. Mandakini went on to act in many films opposite many leading men of that time including Jeetendra, Mithun Chakraborty, Aditya Pancholi and others. However, she quit acting in 1996 and even after many attempts, she never could really gain back the stardom which she readily enjoyed in the 1980s.

International terrorist (designated) and Mumbai gangster, Dawood Ibrahim used to be a part of who’s who of Mumbai once. Apart from financing many film projects, Dawood would often be seen in film parties and spotted with many leading actors, actresses, producers and directors. And in one such incident, Mandakini was spotted with Dawood Ibrahim and their photos got circulated in the newspapers like wildfire. Rumours were already rife that the two were dating owing to the reported allegations that Dawood had personally asked Raj Kapoor to cast Mandakini in one of his films. The photos only added fuel to the fire.

Mandakini vehemently denied the rumours and went on to say that she only had friendly terms with Dawood and that the two were not dating or married. In an interview that she gave to Mid-Day later, Mandakini cleared her stand and said:

“I don't want people to connect me with Dawood any more or even think of that unfortunate episode. That's in the past now. I feel very bad that the media still wants to cash in on my name and make it as controversial as possible... I cleared my stand at that point of time. After some time, you get irritated. If you want to clean your image, it does not mean you have to give a statement every six months”. 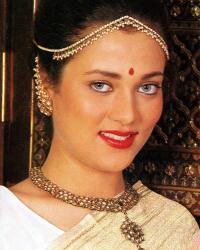 You May Like: 7 Men Came Into Madhubala's Life, Only To Leave Her All By Herself On Her Deathbed

Rumours also suggested that Mandakini had shifted to Dubai with Dawood and that the two also had a child together. In fact, once it was also reported that a filmmaker was shot dead in Mumbai because he had rejected Mandakini as the lead actress of his project. People speculated that Dawood was behind the murder. These reports disturbed her mentally and her family came out in her support. She recalled:

“They helped me to forget things that were really disturbing at that point of time. The entire credit goes to my family. I was really distressed then, as things had happened too suddenly for me to even think about it. I got used to it and accustomed to live under that pressure”. 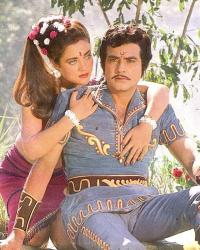 1993 Bombay blasts, in which Dawood Ibrahim was the prime suspect and had funded the terrorist activities, added another trouble in Mandakini’s life. Dawood left the country a day before the worst bloodshed in Bombay was to happen and Mandakini went underground in a farmhouse in Bangalore. Later, she was given clean chit during the investigation process.

The path towards spirituality and simple life 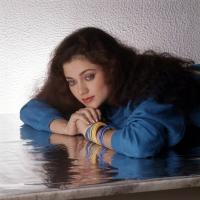 Post the turmoil, it was time to find a peaceful path. Mandakini started following the paths of Dalai Lama and started devoting her time to Tibetan Yoga. She went on to marry a former Buddhist monk, Dr Kagyur T. Rinpoche Thakur. Mandakini, talking about her husband, once said:

“My husband was a monk for a major part of his life before we got married. He's a Dalai Lama follower and has always supported the Tibetan cause. It's not that I am consciously trying to be good to be back to doing movies. I'm still at home with my children”.

By the way, Dr Kagyur gained limelight in the 1970s and 80s as a baby when he got featured in the Murphy Radio advertisements. He never, however, pursued acting and modelling as a career and instead became a Buddhist monk for the next 20 years of his life. Post-marriage, both Mandakini and her husband, opened a Tibetan yoga centre in Mumbai and together run Tibetan Herbal Centre. The couple has a son, Rabbil and a daughter, Rabze Innaya Thakur.

Wow! What a life it must have been for her! From allegedly being involved with one of the world’s most wanted persons to marrying a former Buddhist monk, surely Mandakini has seen so much. Guys, what’s your take away from Mandakini’s love life? Drop your comments below.