As Malaika Arora is in self-isolation, she is missing her son, Arhaan and her pooch, as she can't hug them for a few more days. Check out her latest post below! 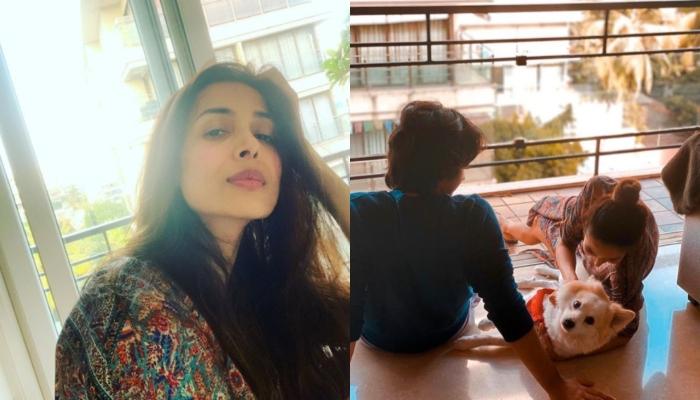 A week ago, on September 7, 2020, Bollywood actress, Malaika Arora and her beau, Arjun Kapoor had tested positive for COVID-19. Both of them had issued statements regarding the same and had informed their fans and well-wishers that they're asymptomatic and are home-quarantined as suggested by the doctors. (Recommended Read: Jacqueline Fernandez Looks Like A Spitting Image Of Her Mom In This Unseen Childhood Picture)

Shortly after, Malaika's sister, Amrita Arora had expressed her discontent and anger over people, who had spread her test reports on social media. Now, as Malaika is in self-isolation, she is missing her son, Arhaan and her pooch, as she can't hug them for a few more days. Check out her latest post below!

On September 14, 2020, Malaika Arora shared a picture of her son, Arhaan along with her pooch from her self-isolation space and penned a beautiful note. She talked about how love obeys no boundaries and that she'll have to wait a few more days to hug her 'babies'. Her note can be read as "Love knows no boundaries". With our social distancing and self quarantine in place, we still find a way to check on eachother, see eachother and talk. While my heart breaks to not be able to hug my two babies for another few days, just looking at their sweet faces gives me so much courage and energy to power through.... #thistooshallpass."

Amrita Arora had taken to her IG stories and bashed people, who had made Malaika's test reports viral on social media. She had written, "Price of being a celebrity? New normal? In sickness but NOT in health?? Is this okay?? My sister's results have been posted on various Whatsapp groups, Facebooks and other mediums! While she was hoping and praying for a negative test and was also preparing herself to get better, this is what one has to deal with? How is this ok?????? What has happened to us humans... sad sad state of affairs!"

Amrita had continued by asking the purpose of sharing Malaika's test report and had said, "Was posting her result of any use to anyone????? She's a responsible citizen who would've declared it anyway!!!! What's the perverse pleasure of making it a discussion and guessing how and when she got it, some going to the extent of saying she deserves it with laughing emojis!! Why why why!!!!" (Don't Miss: Aamir Ali's Mother Adoring His One-Year-Old Daughter Ayra Ali Speaks Volumes Of A Grandmother's Love)

Amrita had then raised solid questions asking how did Malaika's reports get out in the first place. Her note could be further read as "The question is how did her report get out in the first place... How was it ok to disregard a doc/patient confidentiality.. Let's just respect what's happening in the world and stop this ridiculous naming and think ur shaming syndrome! STOP!"

As far as the question of from where could Malaika Arora possibly have contracted the disease goes, she had returned to the sets of India’s Best Dancer a few days back only. And sometime around then, 7-8 members of the dance reality show were tested positive after which the shoot was suspended. Indian Film and Television Director’s Association CEO, Suresh Amin had spoken about the number of cases on the dance reality show and had stated, “I don’t know the exact number, but yes, there have been cases of COVID-19 on India’s Best Dancer. Everyone has been taking every possible precaution but I guess the pandemic is so severe that we have to deal with it come what may." (Don't Miss: K.G.F. Star, Yash Secretly Records Wife, Radhika Pandit As She Tried Hard To Get Her Perfect Selfie)