We have always stressed on the fact that love does not see any hindrance. It just happens! The year 2018 has been a major witness to some of the most astonishing relationships that the world has ever seen. Anup Jalota- Jasleen Matharu, Priyanka Chopra-Nick Jonas and now, Arjun Kapoor and Malaika Arora Khan. These couples have truly proved that age gap is just a number when cupid hits you with his love arrows! (Do Read: 'Pyaar Ka Dard Hain' Fame Alekh Sangal Gets Married To Girlfriend Nazneen On His Birthday)

Arjun Kapoor and Arbaaz Khan’s ex-wife, Malaika Arora Khan’s ‘more than friends’ camaraderie has been grabbing eyeballs for quite a while. But with Arbaaz and Malaika’s divorce, reports about a possible affair steadily died down, only to arise again, when at Lakmé Fashion Week 2018, Arjun and Malaika sat next to each other, merrily chatting away in full public view! Here’s a video in case you missed it:

It was Halloween yesterday and netizens got to see many of their celebs in a full celebratory mood. From star babies enjoying a party, to many celebs dressing up for the occasion, the super-witty Arjun Kapoor wasn’t left behind. Sharing a super-cool edited picture of himself created by a fan page, the Namaste England star captioned it as, “Happy Halloween!!! Just an excuse to post this really cool edit made by @arjunkusafc love it !!! #halloween.” While we bet that you can’t help but gape in amazement at the picture, Arjun’s ladylove, Malaika’s ‘fiery hot’ comment will leave you flabbergasted! Checkout the same below: Well, another proof to their blooming love? As per a latest Filmfare report, Arjun Kapoor and Malaika Arora Khan are all set to tie the knot in 2019. A source close to the couple informed Filmfare, “Malaika and Arjun are extremely fond of each other. They have never really spoken about each other but they are extremely happy in their own personal space. In a steady relationship now, Malaika and Arjun plan to take their relationship to next level and tie the knot next year.” (Must Read: Sushmita Sen's Latest Picture With Rumoured Boyfriend Rohman Shawl Is Giving Couple Fitness Goals) 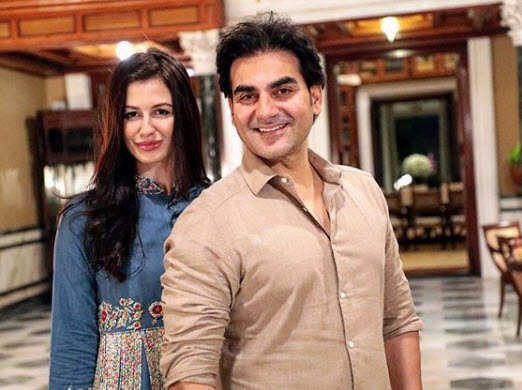 It was Malaika’s 45th birthday on October 23, 2018 and the yummy mummy was holidaying with her boyfriend, Arjun in Italy. While neither of the two posted any pictures or left any comments on the same, but Malaika’s captions such as, “We found LOVE in a hopeless place… He looks at me like nobody else does with” and “Tugging at my heart strings… Sorry belt” pictures, coming out of the airport in the same time but differently together say a different story! Also, Karan Johar’s famous ‘toodles’ video on the sets of India’s Got Talent throw a great deal of light on their love. Checkout the video and you will get the drift on what we are talking about!

Malaika’s ex-hubby, Arbaaz too, is dating Italian model, Giorgia Andriani, but had recently opened up with Zoom Tv stating that he had tried for 21 years to make peace with Malaika but failed. The Dabangg star had stated, “So that happens in relationships also. I tried for 21 years but I couldn't succeed in one aspect but theek hai (that's okay). It's alright. Not many people even try that long.” He had also added, “Human beings would still want (more) and you also have people who say I couldn't have asked for a better woman or a better wife, I am so happy. Yes, those scenarios also exist. But, perfection is something that is a constant thing you need to achieve. It is not that you have achieved it and it's gonna stay. It's everyday hard work. To continue to be where you have to be.” (Checkout! Ayushmann Khurrana's Kiss With Yami Gautam In Vicky Donor Led To Discord In His Marital Life) Well, it is good to note that Arbaaz and Malaika have found the love of their lives, once again, away from each other. We are surely interested to know, what’s in store for the couples in the future. How about you?