After winding up Lakme Fashion Week 2019, Malaika Arora whisked off to some anonymous location with her boyfriend, Arjun Kapoor. Checkout their pictures inside!

If she is the style icon, giving inspiration to many. He, on the other hand, is the ‘Ishaqzaada’ of the Tinseltown. Together, these two make for one of India’s Most Wanted couples for they have 24*7 scanner on them. The couple in question is none other than Malaika Arora and Arjun Kapoor, who are eventually touted as the ‘IT’ couple of the B-town. (You May Like: Sushmita Sen's Birthday Wish For Her 'Gift' Alisah Proves How Ecstatic She Is On Her Turning 10)

Malaika Arora had recently impressed everyone and turned heads for her fantabulous ramp walk at the Lakme Fashion Week 2019. The details of which we will be uncovering in the paras to come, let us first tell you that right after winding up the mega event, Malaika whisked off to some anonymous location with her boyfriend, Arjun Kapoor. Though the destination was not revealed, one thing was sure that the two looked super-happy as they were en-route to another romantic getaway of theirs. 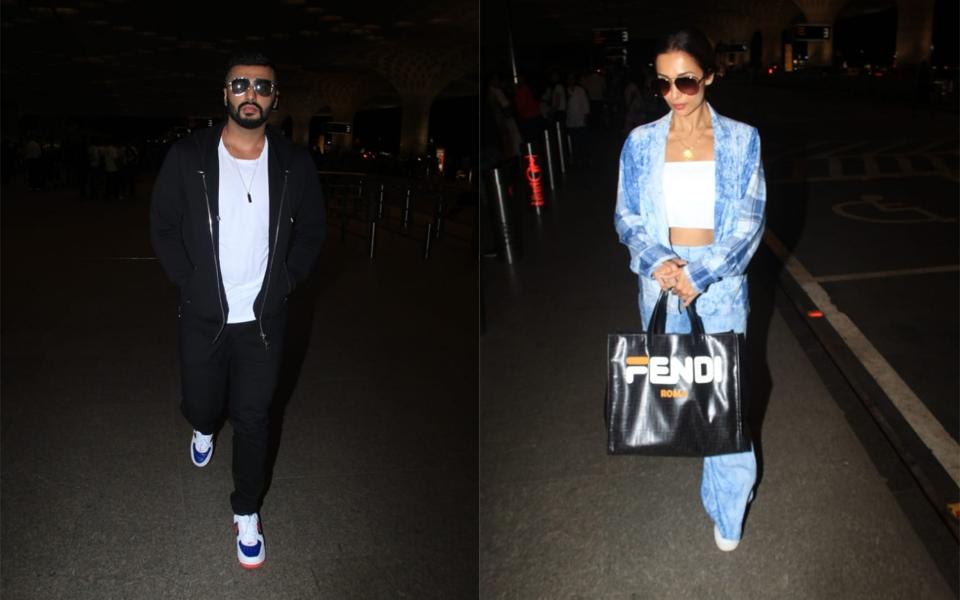 While that was not enough for the lovers to make everyone go green with envy, Malaika has now shared a couple of pictures on their respective social media handles. Arjun shared only one picture, along with a caption that could be read as, “Stand still, take a moment, be grateful.” To which, Malaika couldn’t stop swooning over and left a heart-struck eye emoji on the post. Checkout: On the other hand, Malaika has been sharing a couple of pictures on her Instagram stories posing amidst the backdrop of a beautiful beach by the lovely blue sea. The Munni Badnaam Hui actress is looking super-stunning in even her de-glam look, which is what everyone is drooling over in her latest pictures. What along with this grabbed the spotlight, is Malaika’s one-liners on her snaps, “Mornings be like this”, “Sun-kissed”, and “Feels like I am floating”. Take a look at all the pictures here: 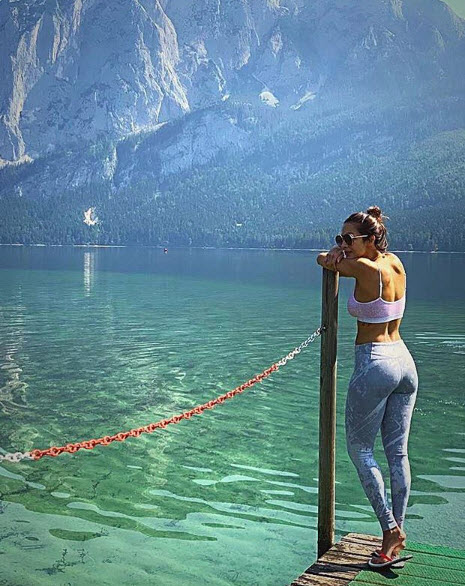 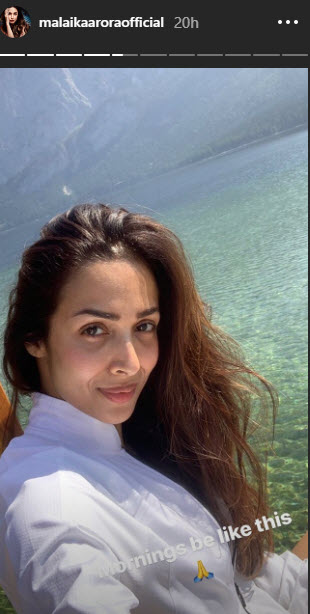 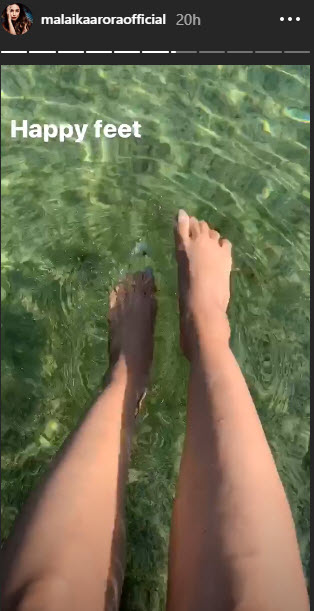 Coming back to Malaika’s Lakme Fashion Week 2019 walk, she had turned a muse for the designer, Diya Rajvvir. Malika had left everyone open-mouthed, looking stunning in a marsala hued ensemble from Divya’s ‘Rosettea’ collection, wherein Rosettea can be best described as, rich, feminine and vibrant. She had stunned everyone in a plunging neckline choli along with a long skirt with a thigh-high slit. The fan sleeves, as well as the embroidered roses on the ensemble, that had truly made her look like a diva. (Also Check: Amitabh Bachchan Reveals His Property Will Be Equally Divided Between Abhishek And Shweta Bachchan) 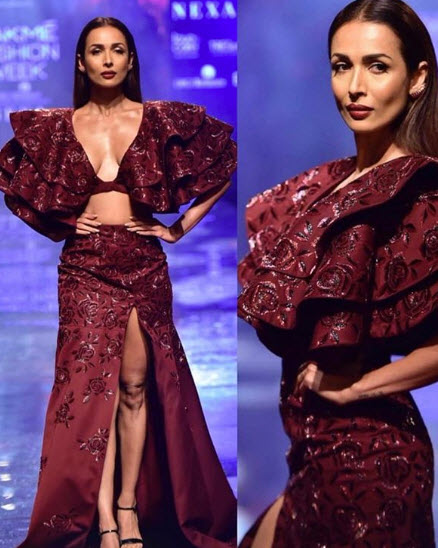 Coming back to Malaika and Arjun, just like every other couple of Bollywood, marriage rumours of Malaika and Arjun too keep floating in the media. In a conversation with Filmfare, Arjun had retorted, "I am not getting married. Malaika and I have to still discover each other in public space and enjoy the comfort of being a couple. We need to ease. We need to take our mind off this pressure of getting married. Sometimes you just need to be in a relationship. You need to live it; you need to enjoy it for what it is, rather than what it should be according to people. We are at ease with each other." Arjun and Malaika’s relationship raised many eyebrows and people called them names. When in a chat with the Hindustan Times, Malaika was questioned if the scrutiny on her personal life gets to her at times, she had given an on-point answer and had remarked, “I think there will always be scrutiny about anything and everything that everybody does. Any celebrity will have that situation. Guess if you are in the business, you have got to get used to it, the whole prospect.” And when she was further probed as to if negative things surrounding her name affects her, she was quoted as saying, “You can’t stop people, these are their personal opinions.” (Do Read: Aayush Sharma Indirectly Confirms Wife, Arpita Khan Sharma's Pregnancy, Posts A Cryptic Comment) 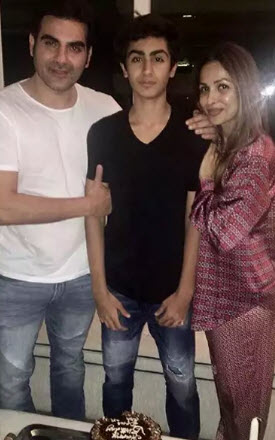 For the unversed, Malaika Arora and Arbaaz Khan parted ways after being married for almost two decades. Once in an interview with the Hindustan Times, she had revealed that post her divorce she had felt vulnerable and had given credit to her son, Arhaan, who had always been by her side. Malaika had remarked, "Arbaaz and I have moved on, amicably. We have to be sensitive to our child (Arhaan) and his needs. When we parted ways, I felt vulnerable, though I am not a vulnerable person. I didn't know which direction I wanted to move into. I was just sure that I have to give my child a stable environment, and to date, it has been my number one priority. Gradually, one thing led to another and now, things are how you see them today. I have to give my son a lot of credit for that." (Checkout: Erica Fernandes And Parth Samthaan Enjoy Their Vacation Amidst Sun, Sand And Beaches In Maldives) 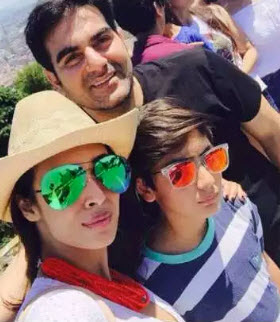 Adding further, she had gone on to say, "He has been very understanding and supportive of me. That was essential for me. My happiness matters the most to him and his happiness, to me. He has been instrumental in shaping my life. There were really no plans of being in another relationship, but things happened organically. We're now in a phase of our life where we need to give our relationship that respectability by acknowledging each other's presence."

Having said that, what do you guys have to say about Malaika and Arjun’s vacation pictures? Do keep us posted! Celebrity fashion is one of the hot topics in B-Town, and time and again, we have seen many celebrities making heads turn with their fashion statements. And when it comes to celeb fashion, Malaika Arora always tops the chart as she is a fashionista. From opting for risque outfits to