Arpita Khan Sharma and Aayush Sharma are the newsmakers of August due to reports of the former’s second-time pregnancy. Is it true? Aayush's cryptic reply reveals it all! 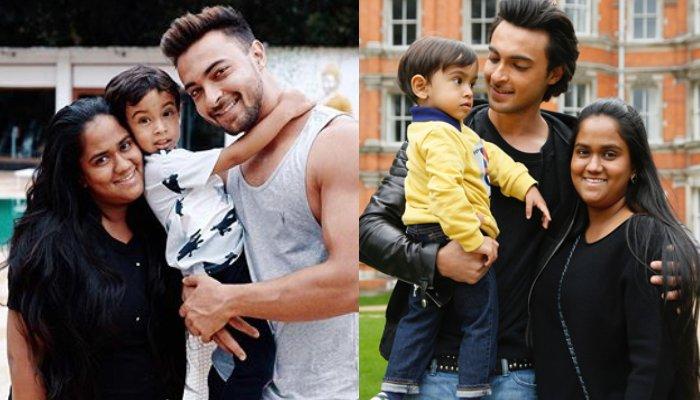 Celebrities, their interpersonal relationships, ‘good news’ and the ‘bad news’ that governs them and the extravagant life that they lead often makes us blurt out ‘sighs and wows’! Their marriages and the dreamy life that they lead thereafter also garners huge curiosity among the masses and that is exactly where paparazzi and news mills come to the rescue (thank us later!). In the similar lines, it was early this month, when we had shared with you all that Salman Khan’s sister, Arpita Khan Sharma and her budding superstar hubby, Aayush Sharma might embrace parenthood for the second time. While that was again just speculation, but this time, we finally have an indirect nod from the ‘dad-to-be’ himself! (Do Read: Amy Jackson Reveals The Gender Of Her Baby, Ecstatically Announces In Baby Shower Ceremony [VIDEO])

Arpita Khan Sharma and Aayush Sharma met around 2011 through common friends but had lost all contacts in the midst. The duo went back to becoming friends in 2013 and thus, Cupid struck them with the sharpest love arrows. Only a year later, Arpita Khan had happily added a ‘Sharma’ to her surname when she married Aayush Sharma in a dreamy wedding in Hyderabad. Two years later, on March 30, 2016, Arpita and Aayush had welcomed parenthood when Ahil Sharma came into their lives. And going by the latest turn of events, what looks like it, the couple is going through the same bliss for the second time!

Like we mentioned before, Arpita Khan Sharma and Aayush Sharma are the newsmakers of August due to reports of the former’s second-time pregnancy. While neither Arpita nor Aayush has confirmed/denied anything, it is a cryptic comment by Aayush, which suggests that Arpita’s second pregnancy is indeed a confirmation! A latest picture posted by the Love Yatri actor had him, son, Ahil and ‘pregnant’ wifey, Arpita, happily pose for the camera. While the caption that accompanied the picture was enough to make us go all ‘awww’, it was his reply to one of the comments that captured all the attention. His comment could be as, “Family, where life begins and love never ends”, to which, a friend of Aayush, Varun Gupta who had handled the marketing of his debut film, commented, “All 4 are looking Amaazing”, with two cryptic emoticons. Aayush replied back by saying, “haha thanks sir”. Hence, proved!

Arpita Khan Sharma’s second-time pregnancy rumours had begun when a Mumbai Mirror report contained details on the same. The report had it that Arpita and Aayush are set to become parents for the second time and have been consulting a doctor from a leading Bandra hospital. It was also reported that it is a moment of ‘happiness’ for the Khan-Sharma family.

It was on March 30, 2016, when Arpita Khan Sharma and Aayush Sharma had embraced parenthood for the first time when they had welcomed their baby boy, Ahil Sharma. Ahil is the apple of the Khan-Sharma family’s eye and time and again we have seen instances of his star maamu lot, Salman Khan, Sohail Khan, Arbaaz Khan turning into a tot for him! Announcing the arrival of their first child, Aayush had written, “Our Prince has arrived.” Arpita too had posted an endearing post about the same and had penned, “Thank you for welcoming our Lil Prince with open arms & hearts filled with so much love & showering him with all your blessings & good wishes. love from @aaysharma & @arpitakhansharma.” (Must Read: Mahhi Vij And Jay Bhanushali Finalise First Alphabet Of Their Daughter's Name, Ask For Suggestions)

The Khans are one of the most talked-about families in the industry for their strong bonding and an amazing relationship with each of their family members. But Arpita Khan Sharma and Aayush Sharma’s camaraderie and love life are much cherished in the industry. In an interview with the Filmfare, Aayush had spoken about Arpita’s constant support and contribution towards his journey as an actor. He had stated, “She’s been my support from day one. She’s my backbone. She’s warm and caring. I didn’t know the seriousness of this profession. When I started training under Bhai it came as a rude shock. I realised it’s not as easy as it looks. She was the one, who kept me motivated."

Aayush Sharma had further added, “She said, Listen you have to do it for me, for our son Ahil, for yourself...Like one day I had to do an action sequence in Gujarat. But I was unwell. Arpita told me on the phone, you can declare a pack-up. No problem. But remember, when one day Ahil goes on the set, he should hear that his father used to perform like this and under such conditions. That will motivate Ahil to work harder. Arpita’s one person, who never gives up. On days when I come home tired, she says, Be grateful you have work. There are many, who wait for this opportunity. So, don’t let it go.” (Also Read: Angad Bedi Posts A Heartfelt Birthday Wish For Neha Dhupia, Wants Daughter Mehr To Become Like Her)

All that we are waiting now, is a cutesy official pregnancy announcement from Aayush and Arpita! What say, peeps?