Suriya And Jyothika's Love Story: Born In A Punjabi Family, She Broke Cultural Barriers To Marry Him

We have often heard about perfect marriages but South Indian superstars, Suriya and Jyothika have redefined the entire meaning of couple goals. Take a look at their beautiful love story.

He is the heartthrob of the youngsters, she has ruled the screen with her beauty and poise, Suriya and Jyothika are the perfect examples of a fairy tale love. Saravanan Sivakumar, known by his screen name Suriya and his gorgeous wife, Jyothika, have made us believe in true love. They have proved that love is the only ingredient required for a happy married life. After 14 years of marital bliss, the couple still manages to charm their fans with their camaraderie and still give major couple goals. 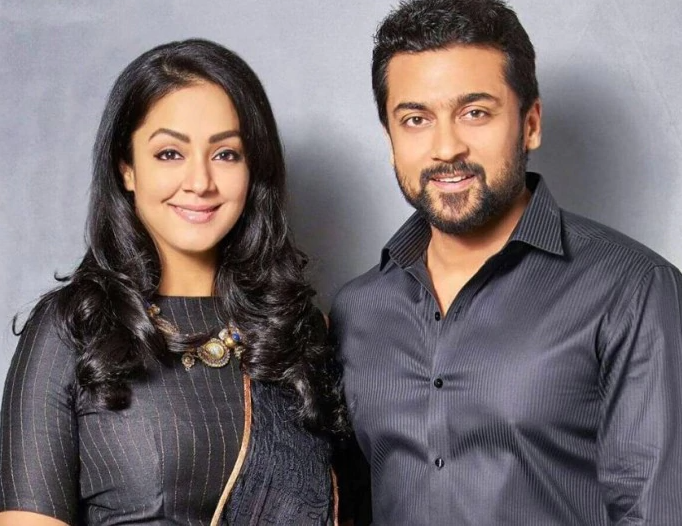 Kajal Aggarwal Shares A Glimpse Of How Hubby, Gautam Kitchlu Bribes Her For Lack Of Quality Time

Son of veteran Tamil actor, Sivakumar, Suriya has always been a charmer and enjoys a massive fan following in the South film industry. The introvert actor, who is known for his down-to-earth attitude has even managed to impress Mr Perfectionist of Bollywood, Aamir Khan with his stellar performances. He was conferred with the stage name ‘Suriya’ by ace director, Mani Ratnam as it was a common name used by the director for the male protagonists of his films. Suriya had made his debut at the mere age of 22 in the film, Nerrukku Ner, produced by Mani Ratnam. He did not taste success with his initial films and was still struggling to make a name for himself. It was in the year 1999 when Suriya met Jyothika Sadanah, who hailed from Mumbai during the filming of Poovellam Kettupar. Both Suriya and Jyothika were not big stars then and were trying to make a foothold in the industry. 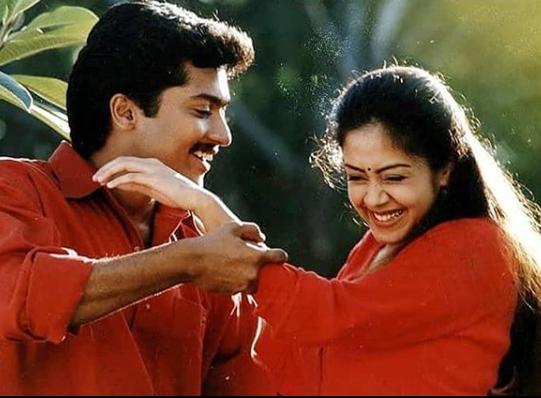 How Love Bloomed Between The Two 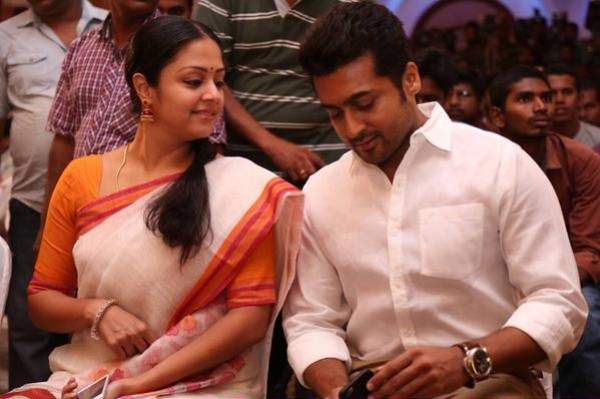 Jyothika was doing really good and was a big star. In the year 2001, Jyothika saw Suriya passing by the sets where she was shooting, she had sent her assistant to call him and that was their second meeting. They started chatting and soon after their second meeting, they had become good friends. By then, Suriya had started inviting Jyothika to his parties and had even started introducing her to his close friends. In 2001, when Suriya’s film Nandha released, Jyothika had attended the premiere and had watched the film. Impressed by his performance, Jyothika had recommended his name to director Gautham Menon for his next project, Kaakha Kaakha (Tamil version of the Hindi film, Force starring John Abraham and Genelia Deshmukh) where she was already playing the female lead. 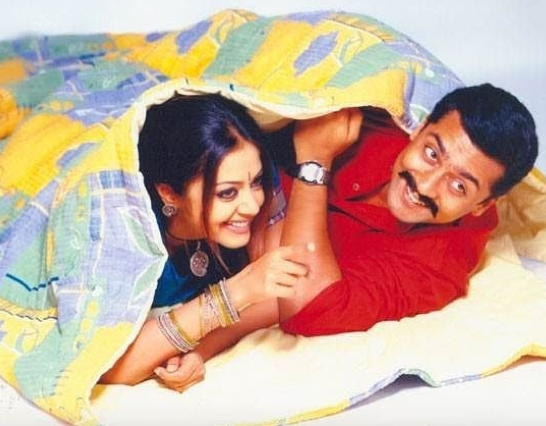 It was during the filming of Kaakha Kaakha, the two had fallen in love. When the film was released, the couple was believed to have gotten engaged. The engagement was a low-key affair and it is said that Suriya had gotten engaged to Jyothika to get some time to convince his parents about their relationship. Their film, Kaakha Kaakha had become a box-office hit and had broken all the records making the two the most sought-after stars. One look at the lovely pair would make their fans go crazy. With every passing day, their love only grew stronger. 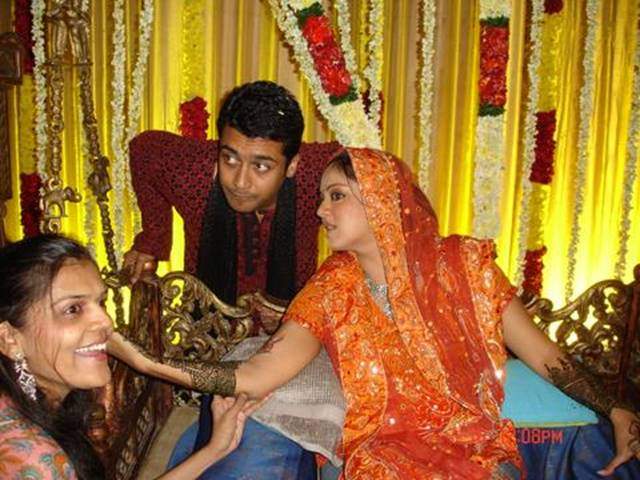 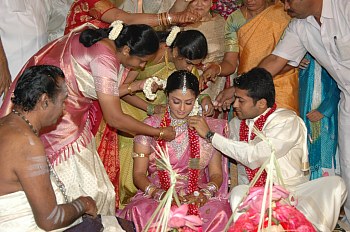 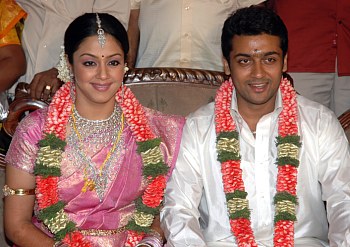 Their wedding was according to traditional Tamil culture and the ceremonies had begun early morning. For the wedding, Suriya had opted for a white silk mundu with a matching white silk shirt whereas, Jyothika had looked gorgeous in a pink silk saree. She had complemented her silk attire with exquisite diamond jewellery. Their wedding was a star-studded affair attended by the whos who of the Tamil film industry and it had also included leading state and central ministers as well.

Suriya and Jyothika’s Happily Ever After 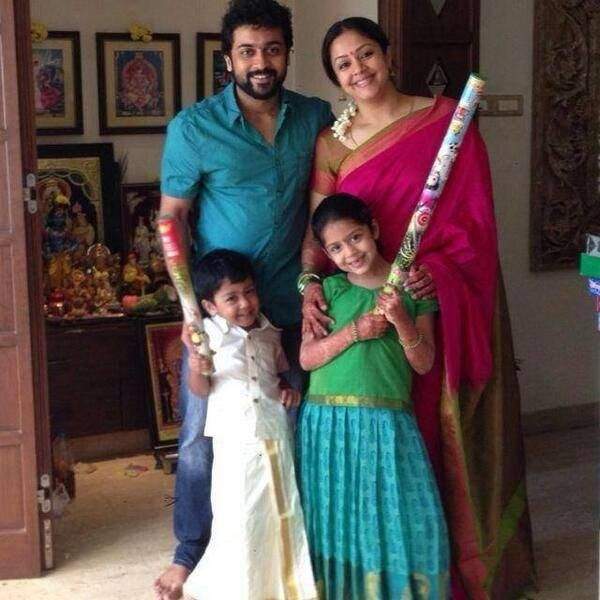 Jyothika had quit acting after getting married and had shifted from Mumbai to Chennai. The lovely couple had completed 13 years of marital bliss and still radiate major couple goals. One look at them makes us believe in the purity of love and how love is the only essential thing that is required to make a marriage work. In a media interaction, Jyothika had stated that she would often sing Hindi songs for Suriya, whereas he would reciprocate to her by singing Tamil songs. 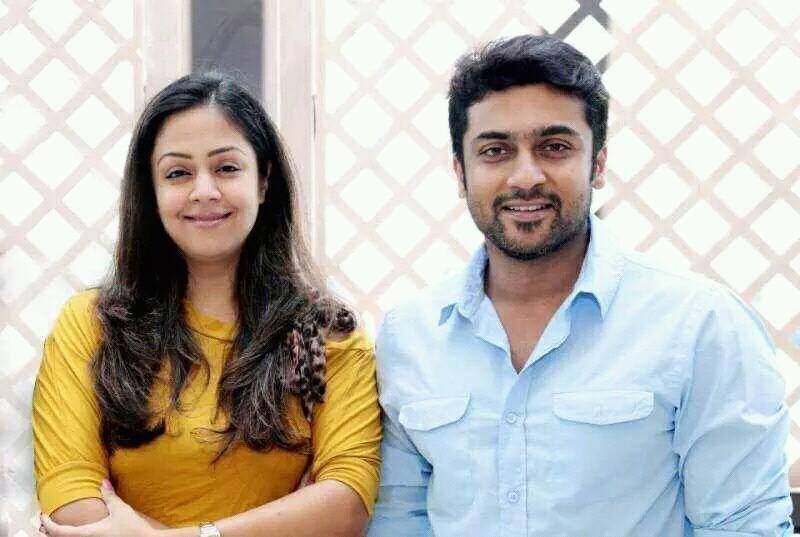 The lovely couple had embraced parenthood in 2007 when they had welcomed a little angel in their lives, whom they lovingly named Diya. In 2010, Suriya and Jyothika had completed their family with the arrival of their son, Dev. Suriya is a doting husband and father, who loves spending time with his family. For him, spending quality time is what makes a relationship works. Despite his busy shooting schedules, he still takes his wife for dates and makes sure the two get time with each other. Not just this, Suriya is a hands-down father, who is more of a friend to his children. For him taking out time for his little ones is what makes him happy, he encourages and guides them throughout. In an interview with Deccan Chronicle, Surya had shared:

Often, we are enacting emotions in cinema and I felt I had become numb to emotions. But my children made me realise the joys of feeling excited, loved, being wanted and admired.

(Recommended Read: Irrfan Khan's Love Story With Wife Sutapa Sikdar Is One In A Million, She Was Truly His Best Half)

He is a Tamilian and she couldn’t utter a word of Tamil, but still, Suriya and Jyothika are one of the most sought-after couples of the Southern film industry. They are the perfect exemplars of how love triumphs everything and if there is love, even language cannot be a barrier. Suriya and Jyothika’s love and commitment towards each other makes us believe that true love still exists and it is all about finding that perfect partner, who can take anything, can go to any extent to make the relationship work.