America's Ex-President, Barack Obama And Michelle's Love Story Is What Romance Is In Real Life

America's Ex-President, Barack Obama And Michelle's Love Story Is What Romance Is In Real Life 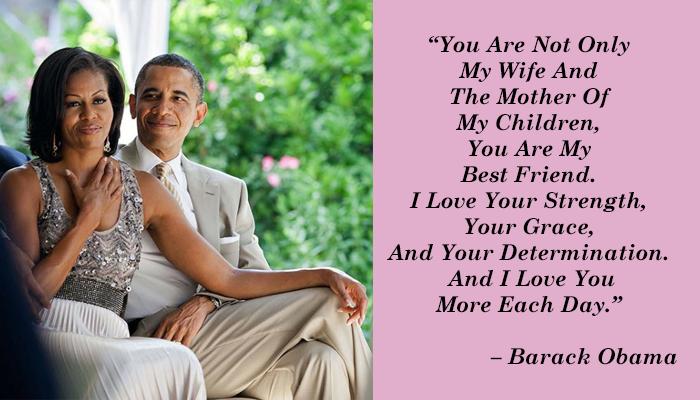 Call them a ‘power couple’ or the monarchs of the politics, Michelle and Barack Obama have considerable influence being the first lady of the US and the President respectively. Ever since the couple began their combined supremacy when they got married in 1992, they have stood flawless and highly professional. But what we need to value the most is their romantic side amidst their agendas, hectic political meetings, speeches, and super-busy official tours. 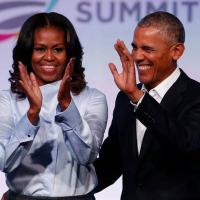 They attract a lot of media attention for being a perfect dreamy couple. No wonder they are like a political force together but their professionalism doesn’t come in the way of their marital and romantic chemistry. In fact, their relationship and devotion to each other is always the subject of news headlines. So, let’s have a look-back at their legendary love and also enjoy the collection of photographs relating to their love story that started decades ago. 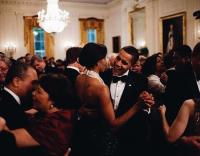 It was a law firm that drew the couple together forever. Little did Michelle know that she was mentoring the rising star and the legend-to-be in 1989 at Sidley and Austin law firm, Chicago. Nearly two decades back, Michelle Robinson was working as an advisor to Barack Obama who was then doing summer intern from Harvard Law. Cupid struck right away and madly-in-love, Obama made the first move. He decided to woo his lady and extend the affair to a husband-wife relationship. 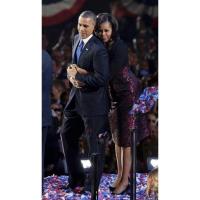 The then newbie couple had a successful first date which was all about sightseeing and a movie. And interestingly the movie they watched was symbolic to what they did next. It was Spike Lee’s ‘Do The Right Thing’ that they went to watch in 1989 a Harper Theatre, Chicago and perhaps they did the right thing to become life partners. They dated for three years before getting married.

The proposal and the marriage 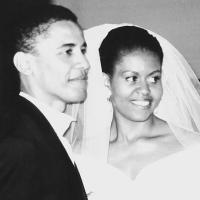 Before getting down on his knees, Barack made sure his lady says ‘Yes’. He planned the proposal at a restaurant as he knew that there was always something special about popping the question over a romantic meal. They went for an occasional celebration at Gordon’s restaurant in Chicago where the waiter put a special spin to the evening offering them a dessert tray having a ring placed on it. And this is how the love saga began. Isn’t it so romantic?

The couple got married on October 18, 1992. The lifetime decision brought happiness and success not only in their personal life but to their professional life as well.

Speaking about their vows, this is what Michelle said:

"Barack didn't pledge riches, only a life that would be interesting. On that promise he delivered."

Thereafter, in 1998, they welcomed their first child, Malia and in 2001, their second child Sasha.

Made for each other

Since their marriage, this pair got better and better. From bidding for a Senate seat and winning in 2004 to announcing Obama’s candidacy for president of the US, Michelle was all by his side. The couple stayed best friends and lovers through their hair-pulling and nail-biting days.

More than just a couple

When it comes to personal life and matrimony, they are like teammates and are each other’s number one fan. They stay together, laugh together, stay united and therefore win and celebrate. Be it an inaugural ball, speech, conference, concert or a campaign, they walk hand in hand and work together towards success. Even though he's one of the most powerful people in the world, it is clear that Barack values the opinion of his wife above all others when it comes to personal matters.

To add to this, Obama added and said:

"Michelle is one of the smartest people I know. She is my chief counsel and adviser. I would never make big decisions without asking her opinion. Certainly about my career and my life.” 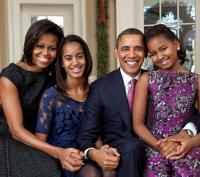 Age and time have perfectly no role to play in their relationship. No matter how renowned or busy they are, they never shy away to flaunt their affection for each other. Be it professional or personal front, they get on the same page with each other. There must be days that would have driven those nuts but they tend to fall more and more in love. Apart from time and space, they also share the same dreams, hopes and the feelings of course. 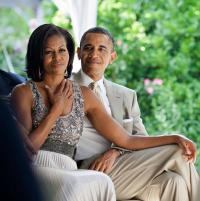 Sometime back on Michelle's birthday, Barack Obama had beautiful words to dedicate to his wife. In an Instagram post, Barack shared a beautiful picture and said:

“You're not only my wife and the mother of my children, you're my best friend. I love your strength, your grace, and your determination. And I love you more each day. Happy Birthday, @MichelleObama”

Final speech as President and tribute to his wife

In the middle of his final speech as president during his two-term presidency, Barack Obama revealed how he feels blessed beyond measure to marry Michelle. He credited his wife for her extraordinary support, devotion, patience and for "taking on a role she didn't ask for".

On a cheery note, he turned towards his spouse and said:

"For the past 25 years, you've been not only my wife and mother of my children but my best friend. You took on a role you didn't ask for and made it your own with grace and grit and style and good humour.” 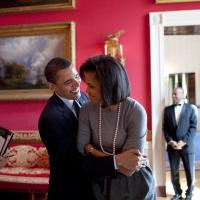 In his victory speech, he went ahead adding and said:

"I would not be standing here tonight without the unyielding support of my best friend for the last 16 years. The rock of our family, the love of my life, the nation’s next first lady, Michelle Obama."

From holding hands to kissing each other, to watching husband giving speeches, to adjusting his tie (bow) and snuggling and lending wife his jacket, let’s have a look as to how the epic love story still goes on wherever the couple goes. They are still as madly in love as they were when they first met. We can clearly see the magic of love being unfolded in their union. Here are the pictures: 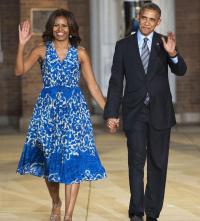 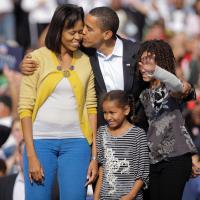 Mr.Obama during his speech

Such a cute moment! 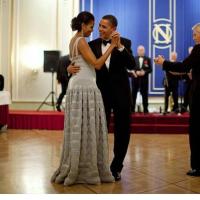 Mr and Mrs Obama dancing together!

Next Read:  8 Shortest Marriages That Bollywood And Telly World Ever Witnessed

So, after coming across this delightful love story we can say that ‘Happily ever after’ is not just a fairytale. In fact, it’s a choice, a desire, an effort, an attempt and much more. No wonder the story of the first lady and the President inspires those who want the right mix of humour, high drama, love and romance into their busy lives. No matter what challenges they face, the famed couple are together and forever. Well, keep checking this space for the latest updates!