KBC14: Amitabh Bachchan Reveals How He Pacifies His Granddaughter, Aaradhya When She Gets Angry

Amitabh Bachchan is a doting grandfather to his grandkids, Navya Naveli Nanda, Agastya Nanda and Aaradhya Bachchan. Check out as he reveals how he pacifies Aaradhya when she gets angry!

Veteran actor, Amitabh Bachchan is currently hosting the popular quiz reality show, Kaun Banega Crorepati 14. Just like every other season, Big B has been sharing some anecdotes from his personal life on the show this time as well. The actor has been working tirelessly even at the age of 79, which is quite inspiring in itself. However, apart from being a workoholic, Big B is a complete family man, who never leaves a chance to keep his family members happy.

Amitabh Bachchan's son, Abhishek Bachchan and his wife, Aishwarya Rai Bachchan, are couple goals, and their fans can’t stop admiring their sizzling chemistry. For the unversed, Abhishek had proposed to Aishwarya Rai formally in New York with a fake ring from the sets for their film, Guru. Later, on April 20, 2007, Aishwarya and Abhishek had tied the knot, and four years later, in 2011, they welcomed a baby girl, Aaradhya Bachchan. 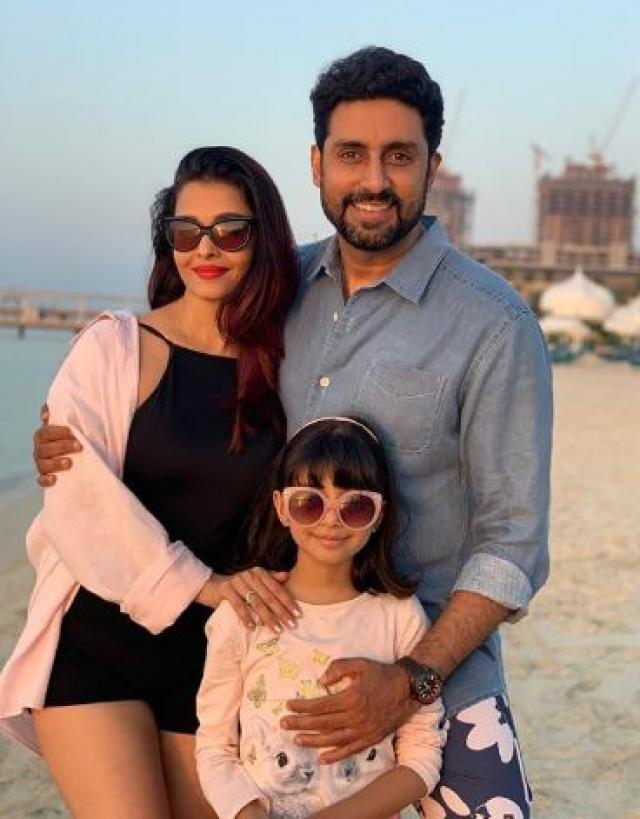 In the latest episode of Kaun Banega Crorepati 14, the contestant, Vaishnavi Kumari, who is also a reporter, expressed her wish to interview the host, Amitabh Bachchan. She revealed that she had never interviewed any celebrity and asked Big B about his weirdest fan moment. Recalling an incident when they were shooting in Kolkata’s Botanical Garden, he shared:

“We had to cross a lake and found 20-30 people standing on the other end. We were in a boat. I saw a man waving a paper and he screamed wanting for an autograph. I called him. He swam through and I hugged him. I also got wet. He was carrying the paper and pen in his mouth while swimming. He was very happy when I gave him my autograph. But then he jumped back into the water to swim back. And the paper along with the autograph washed away.” 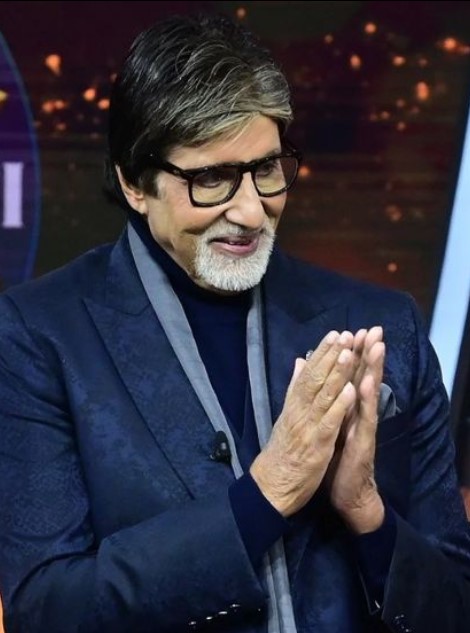 Further in the conversation, the contestant asked Big B if he gets enough time to spend time with his granddaughter, Aaradhya Bachchan. To which, the veteran actor shared that owing to his busy schedule, he returns home late, but added that he often connects with her via Facetime. Revealing how he pacifies her when she gets angry, the doting grandfather said:

“She leaves for school in the morning and I leave for my shoot. While she returns at noon, her mother, Aishwarya gives her tasks. I return home very late. But thanks to technology, we stay connected through facetime at times. Sometimes she gets angry and upset with me. Her favourite colour is pink and she loves hair bands and clips. So when she gets upset, I gift her a pink hair band and she becomes happy.” 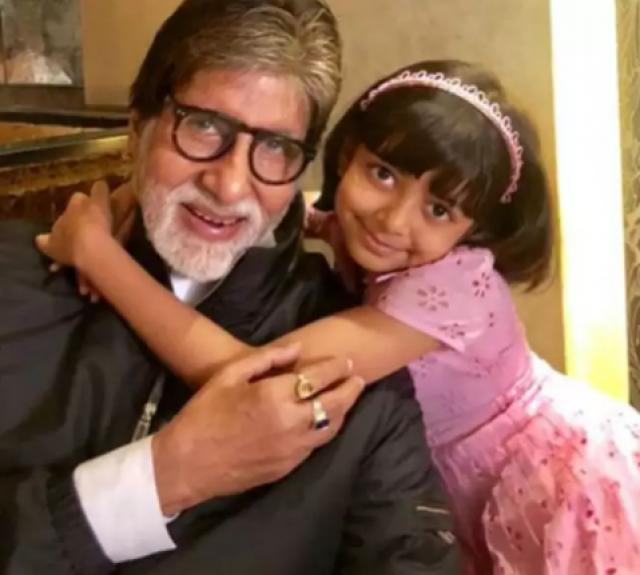 Earlier, in an interview with the IANS, Amitabh Bachchan had shared that he loves to spoil his grandchildren, Navya Naveli Nanda, Agastya Nanda and Aaradhya Bachchan. He revealed how Aaradhya loves to sit at his working desk and wants to play with the laptop and mentioned that it brings him immense joy. Talking about the same, Big B had said:

“I’ve loved all of them. When I want to spoil my grandkids, I am so authoritative that their parents dare not oppose me. Aaradhya will still come and destroy my working desk, as she wants to use this pen and wants to write things and wants to play with the laptop. It brings immense joy and is a beautiful experience.” 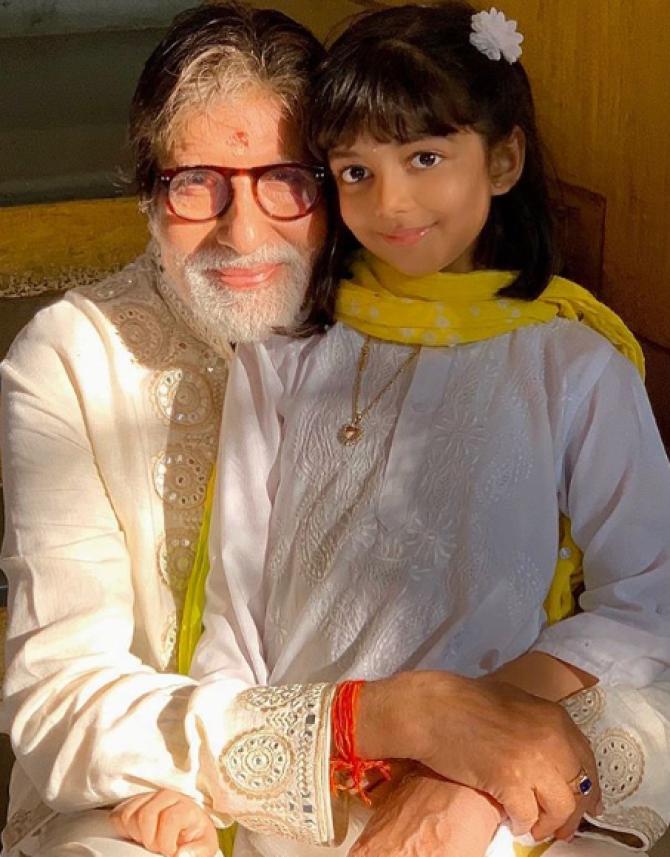 On the work front, Amitabh Bachchan will be next seen in the film, Good Bye.

Next Read: Maheep Kapoor Shares Sanjay Kapoor Had No Work For Years, Says 'We Were The Unsuccessful Kapoor'

Amitabh Bachchan Reveals He Doesn't Get To Spend Time With 'Poti' Aaradhya, 'She Plays Mature Games' 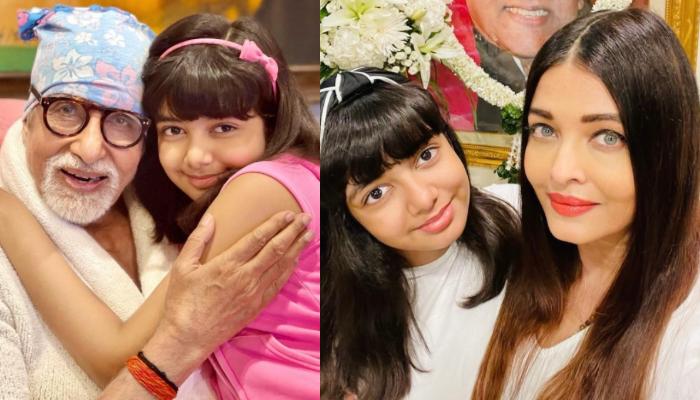 Amitabh Bachchan is a doting grandpa to Abhishek Bachchan and Aishwarya Rai’s beautiful daughter, Aaradhya Bachchan. But the actor doesn’t get to spend time with his poti. Amitabh, the superstar of Hindi cinema, still work at the age of 80. From hosting TV shows and taking new advertisements to working