His talkative eyes, naughty smile, killer looks and acting skills have garnered a lot of female fan following. And all of it is worth it! He made everyone go crazy for his outstanding stint as Rajat (Rajjo) in Pyaar Ka Punchnama and Anshul (Gogo) in Pyaar Ka Punchnama 2. We are talking about none other than Sonu Ke Titu Ki Sweety fame actor Kartik Aaryan.

There have been many speculations about Kartik dating his latest movie Sonu Ke Titu Ki Sweety co-star, Nushrat Bharucha. Both of them look super-stunning together on silver screen. So much so that their fans and everyone thought that they are dating in real life as well. Nonetheless, at a recent event during the cover launch of the latest edition of Health and Nutrition’s March edition, the dashing actor cleared the air. Talking about the bond that he shares with Nushrat, he was quoted as saying, “My relationship is amazing with Nushrat, and there is no affair.” (Check out: 6 Popular Celebrity Couples From The B-Town Who Ditched Marriage And Had A Love Child) 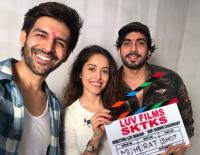 He further went on to say, “It is a very friendly relationship that we have. We have been working together for a pretty long time. It is always good to perform with an actor who is good and inspires you to do better.” For the ones who don’t know, prior to Sonu Ke Titu Ki Sweety, Kartik and Nushrat have worked together in three more movies namely, Akaash Vani, Pyaar Ka Punchnama, Pyaar Ka Punchnama 2. He also talked and shared his happiness on the account of the success of their latest film. Kartik gushed, “I cannot express how happy I am with its success. The box office numbers and critical acclaim that the film has received is great. People have told me that they have watched the film seven times. Such reactions are coming in the industry after a long time and being a part of such a film is great. I am happy with the success of the film.” (Do Check Out: 'Naamkarann' Fame Zain Imam Clears The Air About His Relationship Status With Co-Star Nalini Negi)

Also, he said that he enjoys the love showered on him by his female fans. He also loves the fact that everyone loves his chocolate boy looks and loverboy roles. At the same event, he also shared the kind of woman he would be dating. He said, “A simple and sweet girl who is focused on her work. The girl could be from anywhere, from the industry or outside. If I ever get into a relationship, it would be such that both of us would respect each other.”

Well, as it is said, there is no smoke without fire. There might be something cooking between the two or maybe they are ‘just friends.’ Nonetheless, we love to see them together on-screen, no?

NEXT READ: Boney Kapoor Could Not Stop Crying After Seeing Tina Ambani's Gift In Sridevi's Memory