Karanvir Bohra along with wife, Teejay Sindhu took up the viral plank challenge, but with a twist. Check out the adorable video inside! 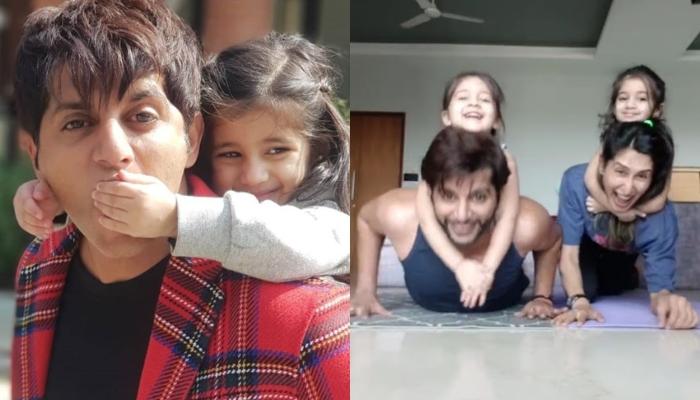 As Spiderman said in Far From Home, "Everywhere I go, I see his face!" I have something similar to say, everywhere time I scroll, I see those videos. Yes, those perfectly manoeuvred home workout videos, which remind us that we can too, not that we do. Almost all celebrities, be it from Bollywood or television are sharing their home workout videos, inspiring millions of their fans every day. In fact, there are some viral workout challenges as well, going on social media these days, and we've brought to you, the cutest one from the lot. (Recommended Read: Aamna Sharif Shares A Beautiful Picture With Son, Arain Kapoor, Gives A Heartfelt Message)

Television star, Karanvir Bohra and his wife, Teejay Sindhu always post some fun and heartwarming pictures and videos of their twins, Bella and Vienna. In fact, their little birds have an official Instagram account also in the name of ‘twinbabydiaries’, which is managed by their parents. This time they took the viral plank challenge with their twins, and you can't miss the video! 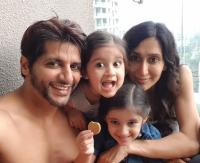 Since everyone from the glamour industry is sharing their workout regimes on social media and engaging in viral challenges, Karanvir Bohra took the excitement to a different level altogether by giving it a twist. He, along with his wife, Teejay tried the plank challenge with their twins! On April 24, 2020, Karanvir Bohra took to his Instagram handle to share an adorable video of himself and wife, Teejay, trying to ace the plank challenge with their little dolls, Bella and Vienna on their back. He captioned the video as "Tried to make the #plankchallange difficult, but my kids have become too heavy. #healthyathome #homefitness" Have a look at the hilarious video here. (You May Also Like: Abhay Deol Finds Love Again In A Celebrity Manager After Breakup with Preeti Desai, Details Inside)

Television's handsome hunk, Karanvir Bohra's little twins, Bella and Vienna are always up to one or the other antics and the internet loves their gimmicks. Sometime before, they had decided it was time for their dada to receive some parlour treatment, and they had turned little beauty experts for him. Pretty sure your heart will swoon after looking at how hard they're working with their cute, little hands. On April 20, 2020, Karanvir Bohra had taken to his Instagram handle to post a picture of himself being pampered by his little munchkins, Bella and Vienna. He could be seen sitting in the balcony as the twins held his hands and were attempting to apply nail paint on them, while Karan was sitting with a face pack on his face. He had captioned the picture as "Never have I been so indulgent.. looks like the roles of the Bollywood actresses will have some competition. I have the masters at work.@twinbabydiaries @kareenakapoorkhan @deepikapadukone @priyankachopra @aliaabhatt @dishapatani BEWARE." Have a look at the picture here: 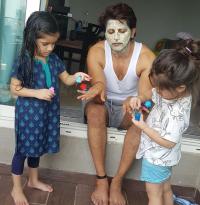 The adorable little munchkins have tried their hands in cooking as well, for their dada. On April 16, 2020, the official Instagram handle (managed by Karanvir and wife, Teejay) of Karanvir’s twins had shared a lovely video of his little goofballs, in which Vienna could be seen telling her ‘dada’ that they were making pancakes for him. The caption on the video had said, “BELLA -#Goodmorning everybody!! We are making pancakes for our Dad today! We love cooking! We cannot touch the stove or cut stuff but we can do other things. There are always other jobs for us. For the #pancakes, we will do the mixing and then the decorating afterwards. And then we will do the serving! We are making pancakes with mangoes, bananas, cinnamon and maple syrup! (But first I need to quickly do my nails, then I will go into the kitchen!) (Full video on our YouTube channel, link in bio.)”. (Also Read: Disha Patani Shares BTS Video From 'Baaghi 3', Gets Compliments From Tiger Shroff's Mom And Sister)

Which viral challenge have you taken up during lockdown? Let us know!