Bollywood actress, Kangana Ranaut admits that her whole family was against her decision of buying a 48 crore bungalow in the heart of Mumbai, Bandra. Find out!

Bollywood actress, Kangana Ranaut is one of the most talented actresses in the industry and is also an icon for all the young ladies out there, who doesn’t want to compromise on their rights, freedom, and dreams. Kangana Ranaut has proved her mettle time and again with her movies and with some heated revelations about the real side of Bollywood industry. The actress is currently spending her lockdown in the hills of Himachal Pradesh with her family amid coronavirus lockdown. (Recommended Read: Shabana Azmi Proves Her Husband Javed Akhtar And Her Step-Son, Farhan Akhtar Are Two 'Peas In A Pod')

Recently, the actress was in talks for her 48 crore bungalow in Mumbai that looks no less than a palace. However, Kangana has revealed in her recent interview that it wasn’t a cakewalk for her because her whole family was against her decision and all she had with her at that time was her self-belief and inner voice.

In an interview with Pinkvilla, Manikarnika actress, Kangana Ranaut talked about her 48 crore bungalow in Bandra, Mumbai in detail. The actress talked about the reaction of her parents and sister when she discussed her decision of buying this property. She said, “Everyone told me you could have worked anywhere else. Why don't you just rent an apartment instead? I told them I can't go to those glass chambers where there's no life. I need organic fabric, plants around me. My family was like: yeh itni sari demands leke direction mein struggle karne ja rahi hai. My sister is like, she's a diva, tum struggling director ho?” Kangana also admitted that her accountant was also saying the same thing and advised her to invest her money in bonds and restaurants. She added, “My CA told me why are you putting the money in this property? Usually, the studio that is backing the project they give you a place to work and the rent for it. He's asked me to put my money in bonds, or in a restaurant where there would be 40-50 lakhs rent eventually.”

But the actress was quite confident about her plan and stated that only time is going to me, whether it was the right decision or not. She said, “So there was a group of people from my parents to my CA and my sister who were after my life. So going against the family never really stops. And I was like, 'Can I just do what I want to do?' They felt I'm wasting my money. It was a challenge and I still feel that going forward, I will figure it if it was a good investment or not.” However, the actress also talked about the only roadblock that she had faced during this deal. Kangana revealed, “The idea was to build my studio. But in between, some of my films hadn't work, like Rangoon and Simran. It's very expensive property in the heart of Mumbai. It's a bungalow, not a flat. So it took a setback, but then after Manikarnika, things changed again and I could rebuild it the way I wanted to. I could have done the basic thing and moved in.” (Don’t Miss: Amitabh Bachchan Recalls Dancing On Stage With Son, Abhishek And Daughter-In-Law, Aishwarya)

Well, there’s no denying that Kangana Ranaut has come a long way in Bollywood and had built an empire of her own in Pali Hill, Bandra, Mumbai. The bungalow has been in headlines since a very long time because of his epic size and design. However, the actress is currently spending lockdown in her hometown, Himachal Pradesh. On April 9, 2020, Kangana's team had posted a video on their Instagram handle and revealed how she is staying in shape. The team had posted a video of Kangana's workout routine with her nephew, Prithvi and had revealed that the actress had already lost 5 kg weight. In the video, we could see Kangana and Prithvi acing a headstand. The video had captioned as "Guys, taking cues from #Kangana to workout, stay motivated and don’t let the lethargy get to you. She has lost 5 kilos, long way to go!" Take a look at it below. (Also Read: Namrata Shirodkar Shares A Quirky Photo Of Mahesh Babu Busy In An 'After Swimming' Chat With Son)

Do you think Kangana’s decision was right? Let us know! 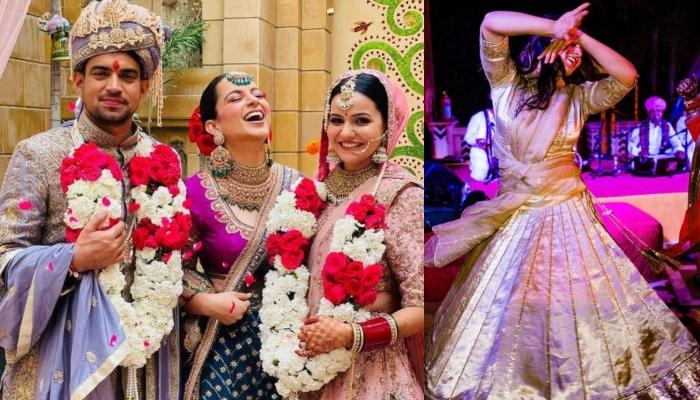 Growing up together, the relationship you share with your siblings is the most special one and no matter how much they annoy you, they have been there for and with you through your thick and thin. They are the mains of your life and when you decide to get married,