As the film, 'Bunty Aur Babli' completes 15 years today, Big B recalled the memories of sharing stage and dancing with his son, Abhishek and 'bahu', Aishwarya. Scroll down to read more!

If you are a 90s kid, you would know what fun songs we have grown up listening to and dancing on. It was a fun riot with all the remixed songs being bombarded on us and also the trend of unplugged songs had begun back in 2000s. We were in a dual treat, and we had loved it that way only. We can still groove on various peppy numbers from those days, from Dilli Ki Sardi to Beedi Jaalae Le, every song was a hit. And amongst all these, what came over as a blockbuster song was, Amitabh Bachchan, Abhishek Bachchan and Aishwarya Rai Bachchan’s peppy song, Kajra Re from the film, Bunty Aur Babli. Well, who knew the trio is not only going to rock in the song, but also going to be a hit in real life too. (Also Read: Himanshi Khurana Misses Boyfriend, Asim Riaz, Shares A Sexy Intimate Monochrome Picture With Him)

Abhishek Bachchan is not just the exact replica of his papa, Amitabh Bachchan but also shares a friendly bond with him. In an interview, Big B had talked about how the two share a friendly bond and also borrow clothes and shoes from each other. He had said, “We both are friends. I had decided that the moment he starts borrowing my shoes, we would become friends. And that’s what we are. Now he borrows my clothes too.” Junior Bachchan’s wife, Aishwarya also shares a warm bond with the Bachchan family as is an ideal bahu to them. Amitabh Bachchan has always been appreciative of her and she has also always showered love on her papa. Amitabh Bachchan, Aishwarya Rai Bachchan and Abhishekh Bachchan had appeared together in a popular film, Bunty Aur Babli back in 2005 in the iconic song, Kajra Re which broke the chartbusters and still continues to be people’s favourite. As the film completes, 15 years today, Big B recalled the memories of sharing stage with his son and bahu and dancing on the song.

Amitabh Bachchan took to his Twitter handle and recalled the times he had spent on the sets of the film, Bunty Aur Babli as the film completes 15 years. Big B not only remembered the times spend with Rani and Abhishek, but also recalled how son, Abhishek and daughter-in-law, Aishwarya used to join him on stage every time the popular classic song, Kajra Re from the film would be played. His tweet can be read as “T 3543 - 15 years .. "Bunty Aur Babli " ... my first film with Abhishek .. such fun .. and what a team .. !! .. and 'kajaraare .. on all our stage shows .. yoo hooo ..” Take a look:

Abhishek Bachchan too had recalled the days when he used to accompany his father to the stage shows, and how Big B had introduced him and his Shwet di (as lovingly called by the actor) to the world. On May 8, 2020, Abhishek had taken to his Instagram handle to share a major throwback video. The actor had shared a video from the year 1981, where his father, Amitabh Bachchan could be seen introducing his kids to the world in a stage show. Big B could be heard saying 'mere do bachche bhi yahan aaye hue hain… main aap sabko unse milwana chahta hoon' and Abhishek and Shweta had come on stage. Big B could be seen holding Abhishek’s hands, saying, 'inka naam Abhishek hai' to which he could be heard saying ‘hello’ on the mic, and then turning towards Shweta, he could be heard saying, 'aur yeh meri beti hain… inka naam hai Shweta.' Along with this really old video, Abhishek had penned down some of his fondest memories from that time. His caption could be read as “#flashbackfriday In 1981, my father started the trend of film actors from India doing shows on stage and performing to their songs. Before that, only playback singers did so.” Have a look at the video below. (Don't Miss: Priyanka And Nick Celebrate Their First Date, Share Their First Picture Together From Two Years Ago)

Abhishek had also talked about how he had always wanted to get on the stage as quite evident in the video. He had written, “What times! As a child standing in the wings looking at the show in awe and wonderment. Not realising at that time the legends that I was blessed to witness perform live. Secretly imagining myself on that stage once I grew up. As you can see from this video, my sister couldn't wait to get off the stage and all I wanted to do was stick around. Thank you @mosessapir for sourcing out this video. It brought back such wonderful memories. @amitabhbachchan @shwetabachchan” (Also Read: Shveta Salve Shares A Passionate Kiss With Hubby, Hermit, Gets Trolled, Gives A Savage Reply)

We love the Kajra Re song! What are your views? 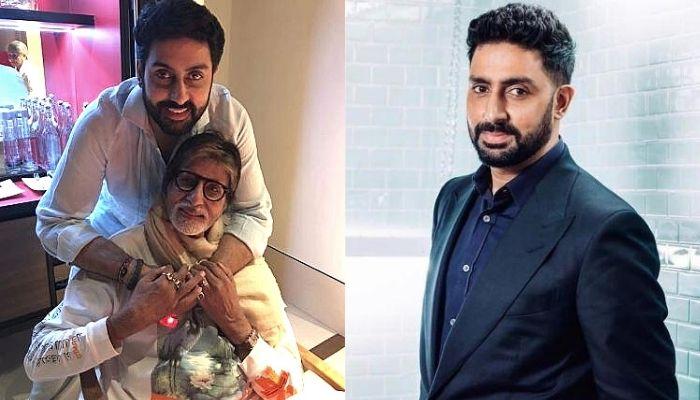 Technology is for the wise ones because otherwise it is misused. Living in the era of technology, where social media has turned out to be one powerful medium to raise your voice, there are some, who are using it only to spit venom. Social media has become a ground to