Kangana Ranaut has made sure to get everything perfect for her nephew, Prithvi's room and balcony while designing her sister, Rangoli Chandel's home in Kullu, Himachal Pradesh.

Kangana Ranaut is one such actress who had hit the headlines for her personal life as much as for her professional accomplishments. Be it her commendable performances on-screen or her unfiltered comments and statements off-screen, Kangana was, is and will always be the Queen of our hearts and B-town. But it is someone else, who has the heart of the Queen. No, it’s not what you’re thinking. We are referring to her jigar ka tukda, her nephew, Prithvi Raj Chandel. (Also Read: Inside Tour Of Rangoli Chandel's New Home In Himalayas, Thanks Sister, Kangana Ranaut For Designing)

Kangana Ranaut and her sister, Rangoli Chandel never leave a chance to give a glimpse of the maasi-nephew bond shared by the 33-year-old actress and Prithvi. As we all know how hard it is to win the heart of a little one as pleasing an adult is way easier than making a child smile. And Kangana is surely acing it as she holds the ‘Best and Coolest Maasi Ever’ tag! Their pictures are proof of how doting maasi Kangana is to her little bundle of joy, Prithvi.

Kangana Ranaut has been making the headlines for the house she had designed for her sister, Rangoli Chandel in Kullu, Himachal Pradesh. Kangana, who is a vocal advocate for sustainable fashion and Khadi, had designed her sister’s home by sourcing materials from the domestic market. And Kangana had made sure to get everything perfect for her nephew, Prithvi’s room and balcony. Rangoli gave a glimpse of his balcony and wrote, "Maasi accessorised Prithu’s balcony in a way that he is not ready to come out of it!!!"

Rangoli Chandel, in an interview with Pinkvilla, spoke about the aesthetics of her home and how her sister, Kangana Ranaut had made sure the essence of her family remains untouched while designing the house. How Kangana had made her sit to take notes for understanding her preferences for the designs, Rangoli stated, “We hired a local contractor from Kullu. I am not into décor. Kangana asked me what kind of house you want - Italian, French, Victorian, hill house or colonial. I said I don’t know all of these. I want a house which reflects my personality. So, Kangana made me and Ajay sit and made notes to understand our preferences.” (Also Read: Haarsh Limbachiyaa Trolls Wife Bharti Singh With 'This Could Be Us But' Meme, Here's How She Reacted) How Kangana Ranaut had made sure to incorporate every single preference of her sister while designing this home, Rangoli Chandel continued, “Kangana loves old and rustic designs, but I told her I don’t want it that way. I like rustic and vintage, but I wanted something new and practical. Since it’s a hilly area, one can see a lot of woodworks. I told Kangana that we must use wood. I also told her that I love marble stones which she doesn’t. Kangana incorporated every single preference of mine while designing this home.” Revealing that every single detailing of the house, even the minutest, was supervised and done by Kangana Ranaut, Rangoli Chandel remarked, “The artefacts and accessories were bought from various markets including Mumbai and Delhi. I am not even aware of some of these market. Kangana did the research! My rug has come from Udaipur. The carpet makers took six months to weave them. The idols in the mandir (temple) have come from Bengaluru. Kangana got throws for the living room from Kullu. Out of which one is made of Yak wool, and it has Kullu Patti (colourful design) which is also used in traditional topi worn by men in the area.” Kangana Ranaut’s exceptional efforts in designing the room of her nephew, Prithvi Raj Chandel is evident in the picture. Elaborating on the same, Rangoli Chandel concluded, “Kangana designed it with a lot of colour and accessories. It has alphabets, planets and a lot of other things. Instead of installing a TV, Kangana chose to put Swami Vivekananda’s portrait because she wants him to get curious about Yoga and Sadhanas. It also has cartoons and games for him to enjoy. She also put up a swing for him in his balcony.” Rangoli added, “The house is beautiful. I didn’t want a home which is designed with a ‘touch-me-not’ style. The more you use it, it becomes more beautiful. Everything used in the house is easy going, and it is looking beautiful and beyond my imagination. I am delighted that we went for everything locally.” (Also Read: Inside Photos From Sonam Kapoor Ahuja's 35th Birthday Celebration, Thanks Her 'Blessing' Anand Ahuja) 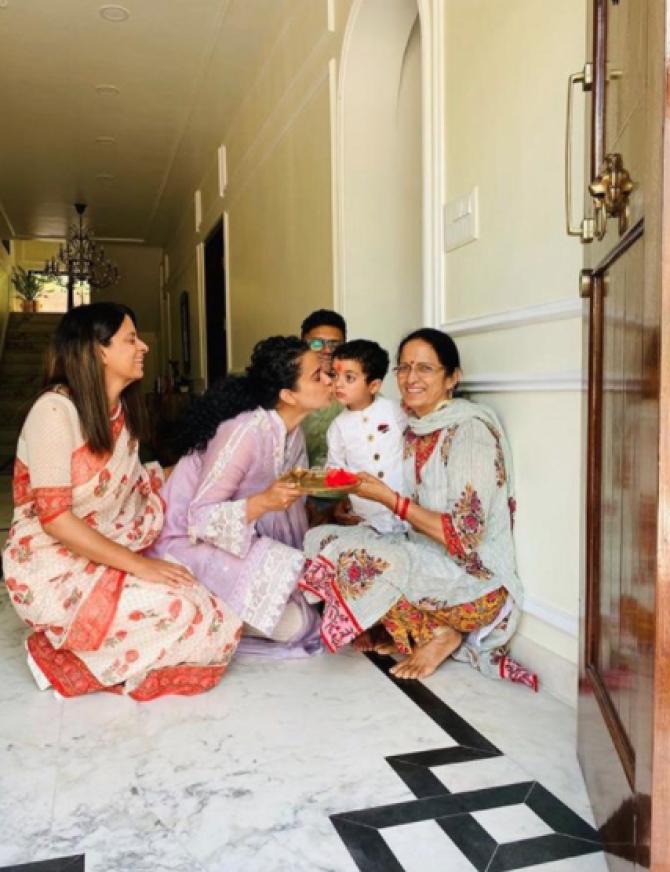 How did you like little Prithvi’s play area designed by his maasi, Kangana?