Kangana Ranaut attends her cousin, Karan's engagement ceremony in Himachal Pradesh and all the talks are about her stunning traditional look. Check the beautiful pictures: In every person’s life, 'wedding' is something that holds upmost importance besides everything else in their lives. The reason why weddings are one of the most significant moments of a person’s life is when you decide to tie the knot of your life with that special one. Despite knowing each and every flaw in them, you still want to be with them and no wonder the day when you decide this is indeed a big day of your life. However, there’s something specific about Indian weddings in comparison to others. The biggest difference is the fact that an Indian wedding is loud, colourful, electric, and full of dance. There’s no arguing in the fact that Indians know how to celebrate an event whole-heartedly, as they bring colourful outfits, outrageous pieces of jewellery, and dances all day long to mark the most important day of their lives. (Recommended Read: Raghu Ram's Ex-Wife, Sugandha Shares A Heartfelt Note For His Newborn Son, Rhythm, Welcoming Him)

However, the inspiration in the hearts of normal people comes from Bollywood celebrities, who give countless wedding goals through their dresses and style. In recent years, we have seen people preparing for their engagement and reception with the same enthusiasm as for their wedding. The credit goes to Bollywood celebrities, who come up with stunning set-ups for these ceremonies. Over recent years, we have seen a lot of Bollywood and Television divas showcasing their stunning outfits in ceremonies through their official Instagram handles. For instance, let’s look into the gallery of Bollywood’s Panga girl, Kangana Ranaut from her cousin, Karan’s engagement with fiancee, Anjali in the valleys of Himachal Pradesh.

The engagement was a family-centric one, as the family members were there at the ceremony to bless the soon-to-be-married couple. The members of the two families can be seen in their traditional attires and also the set-up of the place was managed quite beautifully. However, it was Kangana Ranaut, who took away all the attention with her exceptional look in a maroon-coloured plazzo and dark blue-coloured kurta with matching jewellery. On one side, Kangana flaunts her look in the ceremony, on the other side, her sister, Rangoli Chandel shared a lot of pictures from the ceremony. Have a look at the pictures down below: (Don't Miss: Saif Ali Khan Reacts On Daughter, Sara Ali Khan's 'Aaj Kal' Trailer Says, I Loved My Trailer More) 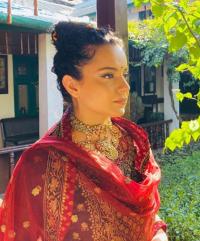 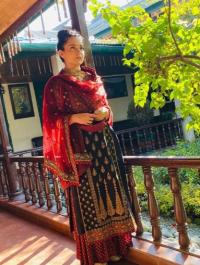 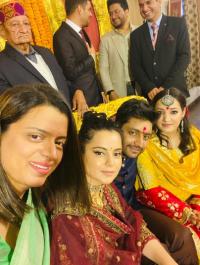 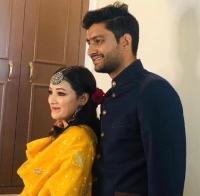 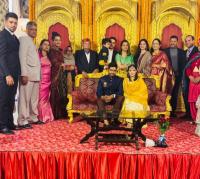 No wonder, the pictures from the ceremony are incredibly beautiful and captivating. Now, all the eyes are on Karan and Anjali’s marriage and hope to hear the D-day date soon. The ceremony is going to be a magnificent one, seeing how lavish the engagement was. To be honest, we all are eagerly waiting to see Kangana dressed in Indian attire on Karan's marriage. Not many people know the secret that Karan wanted to marry since a very long time but was extremely shy in talking to girls. The secret has been opened-up by Karan's dear sister, Rangoli Chandel in a tweet that reads "He is our cousin Karan Ranaut, only 25 magar shaadi ki sabse jaldi, never spoke to a girl in his life magar ghar ki ladies thaan le toh Shaadi toh Hokar he rahegi mummy ji and chachi ji ki Jai"

Seeing both the sisters, Kangana and Rangoli engaged in talking about Karan and Anjali, there’s no doubt the two loves their brother, Karan too much. At the ceremony, Kangana's real brother, Aksht was also present with her soon-to-be-wife, Ritu and it was Kangana who posted a cute picture with the newly-engaged couple on her Instagram account. In an interview with The Telegraph, Kangana didn’t hesitate to reveal that there was some kind of variation that she had felt in between her and Aksht during their upbringing. She had revealed, “I was told there were different rules for me and different rules for my brother, and I found myself constantly rebelling against that. I was born with a very strong sense of being life on my own. I always questioned this difference. People would constantly root me into physicality. Like when I would wear jeans, my grandmom would keep telling me, ‘Look at your hips! With those hips, you shouldn’t be wearing jeans anymore!’ I didn’t understand these things. There was also a sense of not belonging there. When my house was being renovated, there was a room for my brother, but none for me. My parents were certain that they would get me married and I would leave soon. So, there was a constant feeling of insecurity.” (Don't Miss: Mukesh Ambani, Akash Ambani And Shloka Mehta Look Picture Perfect At Javed Akhtar's Birthday Bash) 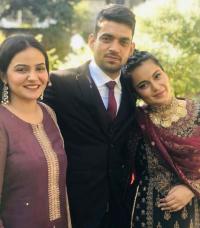 Here's wishing Karan and Anjali all the best for their marriage, hope they have a blast!