On January 17, 2020, Javed Akhtar celebrated his 75th birthday with his friends and family members. Mukesh Ambani attended the bash with his son, Akash Ambani and daughter-in-law, Shloka Mehta.

Birthdays are always special as it is a way to thank God for bringing you to this beautiful world, where you met different people and learn from them. You create memories throughout your journey of life and cherish them forever. The journey of life from the first cry in your parent’s arms to the last breath is always magical. We celebrate birthdays to that we can add many more chapters of fun-filled events in our book of life and can pass on the memories to the coming generations. On January 17, 2020, Javed Akhtar celebrated his 75th birthday with his friends and family members. (Recommended Read: Farhan Akhtar Shares An Adorable Note For His Father, Javed Akhtar On His 75th Birthday)

Let us take you down the memory lane and share important life events in the life of Javed Akhtar. It was in the year 1984 when Javed ji had tied the knot with the love of his life, Shabana Azmi. He had met her for the first time at her father, Kaifi Azmi’s home and had fallen in love with her instantly. Known as the finest composer in the industry, Javed ji has given us some mindblowing and breathtaking compositions to cherish for a lifetime. His sayari’s and songs has won many hearts and he has passed on his talent of sayari’s to his son, Farhan Akhtar.

On January 17, 2020, Mukesh Ambani attended Javed Akhtar’s 75th birthday bash with his son, Akash Ambani and daughter-in-law, Shloka Mehta. The trio looked picture perfect as they posed for the shutterbugs. Mukesh and Akash looked dapper in suits and Shloka opted for a floral multi-coloured dress and kept her looks loose. Shloka’s wide grin stole the show and she became our personal favourite among the three of them. Take a look at the picture and video of the trio:

Javed ji’s birthday bash was attended by the who’s and who of Bollywood. From Shahrukh Khan- Gauri Khan, Sanjay Kapoor- Maheep Kapoor, the Roshans, Deepika Padukone, Arjun Kapoor to Katrina Kaif attended the bash. All the celebs came under one roof in Mumbai last night to wish the ace lyricist-cum-poet-cum-screenwriter, Javed ji on his 75th birthday. Not only the younger generation of Bollywood but Shabana Azmi and Javed ji’s contemporaries also graced the occasion. Rekha ji attended the bash in her signature banarsi saree and gajra in her hair. Boney Kapoor,  Waheeda Rehman, Jitendra with his daughter, Ekta Kapoor and A. R. Rehman with his wife also attended the bash. Farhan Akhtar’s first wife, Adhuna also graced the occasion. (Suggested Read: Chunky Panday's Wife, Bhavana Pandey Shares Unseen Wedding Picture On Their 22nd Wedding Anniversary) On January 16, 2020, Javed Akhtar had hosted a retro-themed pre-birthday bash for his family, friends and acquaintances. Many A-listers like Zoya Akhtar, Anil Kapoor and wife, Sunita Kapoor, Amir Khan and wife, Kiran Rao, Urmila Matondkar, Boney Kapoor, Divya Dutta, Satish Kaushik, Richa Chadha and boyfriend, Ali Fazal, Tabu and many more marked their presence. Javed ji’s son, Farhan Akhtar and his girlfriend, Shibani Dandekar had recreated the song, Khaike Paan Banaraswala from the movie, Don, as they had dressed up as Amitabh Bachchan and Zeenat Aman. Farhan had donned a white shirt and brown trousers and had carried a brown half-sleeve jacket on top of it. His girlfriend, Shibani had complemented him by donning a pink polka dot shirt, white pants and a white scarf around her neck. A photo exhibition was organised for Javed Akhtar on January 15, 2020, to celebrate his 75th birthday. At the occasion, his son, Farhan had talked about his father and had said, “When you really love and respect a human being then it is very difficult to point out one best memory. I feel fortunate that he is my father. I have learned a lot from him about life, work, relationships, culture, etiquettes and languages. I will keep learning from him, so I couldn't have asked for a better person to be my father." On January 17, 2020, Farhan Akhtar had taken to his Instagram handle and had penned a cute note for his father. He had shared a picture of Javed ji with his kids and had captioned it as "75 years of ‘Jadoo’ .. love you pa. Happy birthday." Javed ji’s daughter, Zoya Akhtar had also taken to her Instagram handle and had shared a black and white picture of Javed ji and had kept her wish short and simple. She caption the image as “Platinum Poet  #happybirthday #75yearsyoung #stayunstoppable #loveyouforever #javedakhtar #myfather.” (Must Read: Kartik Aaryan Reveals His Crush On Sara Ali Khan, Says, 'Tu Haan Kar Ya Na Kar Tu Hai Meri Sara') 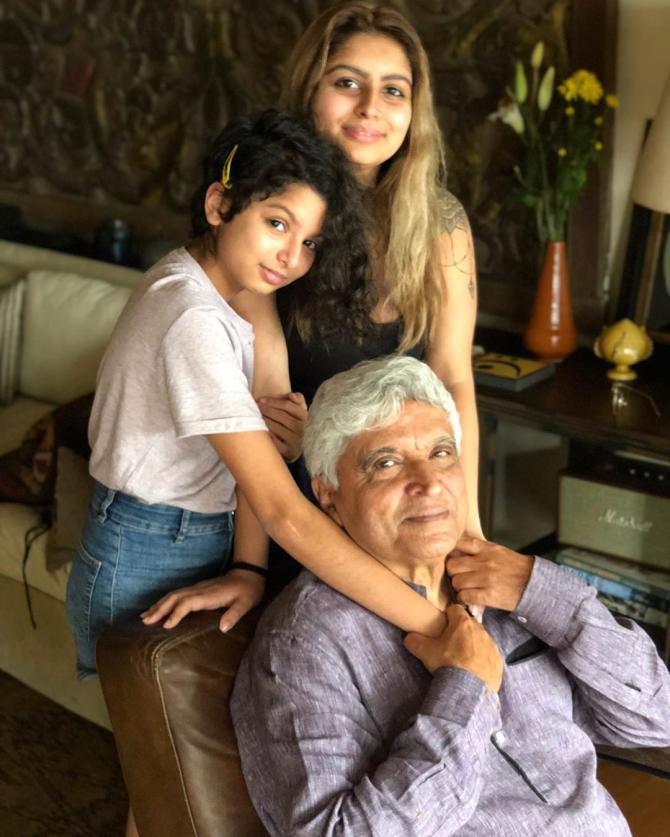