Kamya Panjabi And Shalabh Dang's First Look From Wedding Is Out, Her Unique Lehenga Is Show-Stealer

Kamya Panjabi And Shalabh Dang's First Look From Wedding Is Out, Her Unique Lehenga Is Show-Stealer

February 10, 2020, is the day when Kamya Panjabi and Shalabh Dang will become each other’s forever in the presence of their kids, Aara and Ishaan. Scroll down to see their first looks. As soon as every TV fanatic opens their social media feed and all that they can find is Kamya Panjabi and Shalabh Dang ki shaadi. Ever since Kamya and Shalabh had announced their February wedding, all we are waiting is to get a glimpse of the much-in-love couple’s functions and their first looks. And Kamya has been a sweetheart for delighting her fans with the sneak peeks into her pre-wedding celebrations. From her surprise bachelorette bash, followed by a mata ki chowki, an engagement ceremony in Gurudwara to a fun-filled haldi, Kamya and Shalabh’s wedding seem to be full of fun, frolic, dance and happiness. (Also Read: Samantha Akkineni's Reaction When A Fan Blessed Her To Have A Baby Soon Is Too Sweet To Miss)

Every glimpse of the soon-to-be Mr and Mrs makes us pray for their happy married life and a future full of happiness and love. But before we treat you with the first-ever glimpse of Kamya Panjabi and Shalabh Dang in their wedding avatars, let us brief you about how they met. This month, last year, Kamya had consulted the Delhi-based doctor, Shalabh for a health issue after a friend recommended him to her. And within a month-and-a-half, Shalabh had proposed Kamya for marriage. And now, a year later, in the same month, Shalabh and Kamya will be pronounced husband and wife. 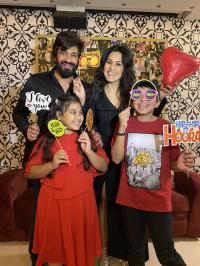 Finally, the much-awaited moment is here! February 10, 2020, is the day when Kamya Panjabi and Shalabh Dang will become each other’s forever in the presence of their kids, Aara (Kamya’s daughter from her first marriage) and Ishaan (Shalabh’s son from his first marriage). Kamya looked resplendent in a red lehenga while Shalabh opted for a golden sherwani. Here are the first pictures: 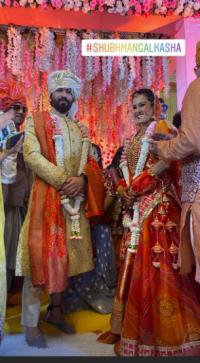 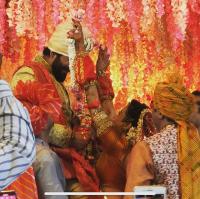 Kamya Panjabi’s journey towards a ‘happily ever after’ with a surprise bachelorette bash, which was planned by her girl gang. The ‘happiest bride to be’ had treated her fans with a glimpse of the fun-filled bash and began her wedding countdown with the pictures. Sharing the pictures, Kamya had written, “Thank you my lovelies for the wonderful surprise. Thank you for making me feel so special. Yes yes Meri Shaadi hai @chouhanmansi17 @immalapunjabi @sonia_punjabi @poojaa_singh_ @deepali_gautam @baishakhi05 @dazzling123 #shubhmangalkasha.” Kamya had looked drop-dead gorgeous in a sexy racy black spaghetti top with a red skirt, which she had teamed with a gajra and a beautiful neckpiece. (Also Read: Sonu Kakkar's Husband, Neeraj Sharma Surprises Her With A Brand New Car As A Pre-Valentines Day Gift) 4 days before the wedding day, Kamya Panjabi had taken the blessings from Lord Ganesha and the pre-wedding functions had officially begun on an auspicious note. The bride-to-be had looked graceful in a pink-coloured saree with a contrasting orange-coloured blouse. Kamya had accentuated her look with a pair of statement earrings, a neckpiece and her hair pulled back in a bun. Posting the two pictures, Kamya had written, “And the celebration of #shubhmangalkasha begins Jai Mata Di #matakichowki @shalabhdang” and “OM SHRI GANESHAYA NAMAH #shubhmangalkasha.” 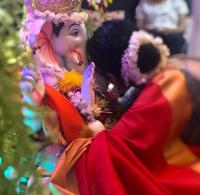 Every glimpse of Kamya Panjabi and Shalabh Dang beams with happiness and love. And why wouldn’t it? After all, what could be more fortunate and special than finding a soulmate for life? Kamya and Shalabh had exchanged rings in front of Guru Nanak Saheb in a Gurudwara. Kamya and Shalabh glowed with joy as they exchanged rings. While Kamya had looked beautiful in a golden black sharara, Shalabh complemented her perfectly in a blue and white kurta-pyjama. Kamya couldn’t stop blushing as she flaunted the huge diamond rock on her finger. Sharing their engagement video, Kamya and Shalabh’s official wedding photographers wrote, “It's Official Guys. The on Screen television diva @panjabikamya says YES to @shalabhdang.”

For the haldi ritual, Kamya Panjabi looked resplendent in her yellow suit but it was her daughter, Aara who was the happiest as she brought her mother for the ceremony, holding her hands. Later in the evening, Kamya and Shalabh Dang had hosted a combined mehendi and sangeet function and it had created a stir on social media. The most chilled out and happiest bride, Kamya had looked gorgeous in a shimmery blue lehenga, Shalabh had looked dapper in a black sherwani. Kamya and Shalabh danced their hearts out at the ceremony. From writing her to-be hubby's name on her hands, dancing to the beats of Panjabi and Bollywood songs to striking poses, Kamya made for the happiest bride of Indian television. Kamya’s dear friend, Kavita Kaushik shared a video of their dance on Mukjho Rana Ji Maaf Karna from the film, Karan Arjun and captioned it as “Kamya ki shaadi, start your day with this profound dance and jaldi tumhaare karan Arjun bhi aayenge.” Sharing a video of ‘mehendi ki rasam’, Kamya wrote, “#shubhmangalkasha @shalabhdang @theglamweddingofficial #mehendikirasm.”  (Also Read: Mira Kapoor Shares A Monochrome Picture With Shahid Kapoor, Proves That Their Love Needs No Caption)

Heartiest congratulations to Kamya and Shalabh! 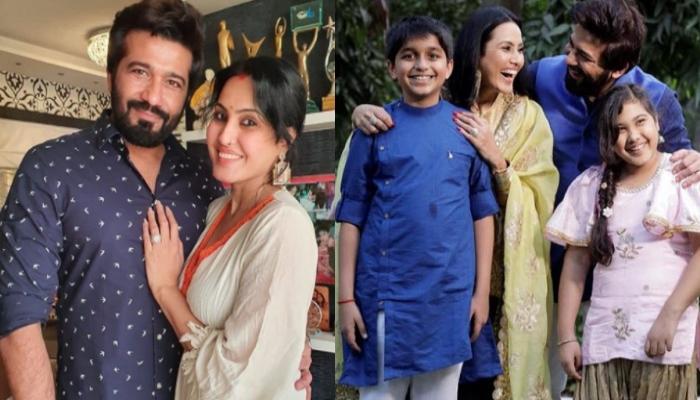 Having someone, who understands you and supports you throughout, makes life worth living. From holding hands to taking saat pheras, the journey from a couple to husband and wife becomes the most cherished one. While understanding, faith and mutual respect are important elements of a relationship, it is the sheer love that binds