Kalki Koechlin Reveals The Name Of Her Baby Girl, Shares A Heartmelting Post For Her 'Little Momo'

Kalki Koechlin Reveals The Name Of Her Baby Girl, Shares A Heartmelting Post For Her 'Little Momo'

Kalki Koechlin welcomed her little angel on February 7, 2020. On February 9, 2020, Kalki took to her Instagram handle and shared the name of her angel with an emotional note.

The warmth in a mother’s arms is the most comforting thing in the world, she can take anyone’s place, but nobody can take her place. From carrying a life inside her for nine months to nurturing him/her with the best of things, a mother’s love is non-comparable. Motherhood is not a cakewalk, throughout the pregnancy, a mother bears a lot of physical as well as emotional changes but still doesn’t complain. From the never-ending backaches to repeated morning sickness, what a mother undergoes is unthinkable, but the moment she holds her little one, all her pains vanishes. Such is the power of motherhood. (Also Read: Kamya Panjabi Looks Stunning On Her 'Mehendi' Night, Dances Her Heart Out With Fiance, Shalabh Dang)

Kalki Koechlin is undergoing through all these emotions as she had welcomed her little bundle of joy on February 7, 2020. The Dev D actress had announced her pregnancy with her Israeli classic pianist boyfriend, Guy Hershberg on September 29, 2019. Since the day, Kalki had embraced motherhood, she had been flaunting her baby bump making all her fans eagerly wait for the big news of her little one’s arrival. The actress was earlier against the idea of motherhood but her unexpected pregnancy has changed her entire concept of motherhood and parenting.

On February 9, 2020, Kalki took to her Instagram handle and announced the name of her little angel with a picture of two footprints. Along with the picture, she wrote a heart-melting note her doting daughter and to all those women who had experienced childbirth. Her note can be read as “Please welcome Sappho. Born 07/02/20. She just spent 9 months wrapped up like a momo in my uterus. Let's give her some space. Thank you for all the good wishes and positive energy pouring in. And respect to all the women who go through the intense and gruesome experience of birth, be it vaginal or c section, so many of whom are not given credit or support for the biggest challenges they face, but are expected to do it out of some kind of duty. The process takes a huge toll both psychological and physical and should have the backing of an entire community to truly heal.” (Also Read: Geeta Phogat's Son Arjun Saroha's 'Jab We Met' Picture With His Nani Is All About Unconditional Love)

Her note further read as “And a reminder to each and every human being of where we started, being formed from tiny molecules to conscious, beautiful beings. We are survivors of the biggest battle, the one for life and existence, and should treat ourselves and others with that love and respect. "Some say an army of horsemen or infantry, A fleet of ships is the fairest thing on the black earth, but I say It's what one loves." ~Sappho~ circa 600BC.”

In an interview with the Hindustan Times, Kalki opened about her pregnancy and the preparations she is making before welcoming her little bundle of joy. She opened up about learning lullabies for her baby, one in Tamil called Kanne Kanmani, others from French, Bengali and Portuguese. She further stated, “I am enjoying playing the ukulele and that’s pretty nice. They say that babies can start hearing from 27 weeks so it’s nice to have these good influences around. I have to take it step by step for every trimester there are new challenges. Thankfully, I have a wonderful midwife who’s helping me prepare for labour and is also teaching me about breastfeeding and about all the things a baby needs in the first few months.”

On January 27, 2020, Kalki Koechlin had taken to her Instagram handle and had shared a picture of herself looking adorable, flaunting her ninth month baby bump. Kalki, who was then in the last trimester of her pregnancy was counting days to hold her little one. In the picture, Kalki had donned an orange swimsuit and the pregnancy glow was very much visible on her face. Along with the picture, she had written a caption which could be read as “Blowing up like a balloon of anticipation coloured by YouTube videos of birth stories, Birthcentre updates, a long list of heavy books, the endless advice of mothers who know better and the black hole of Whatsapp spamming from various sources as I wait for my own version of this age-old story to unfold.” (Also Read: Trishala Dutt's Comments On Her Step-Mom, Maanayata Dutt's Vacation Pictures Speak Volumes Of Love)

Well, we are eagerly waiting to see the first picture of Kalki’s little angel! 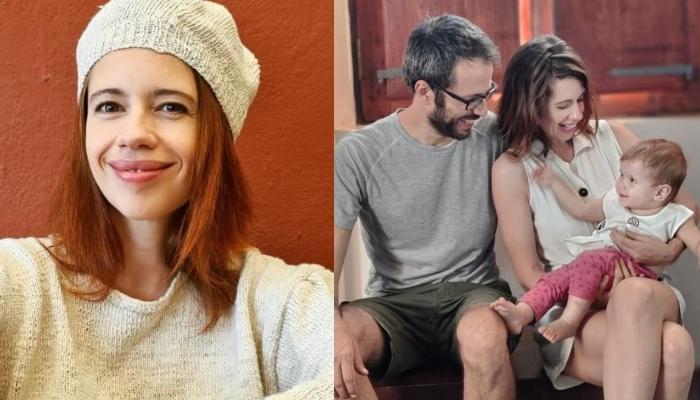 It is often believed and experienced by couples, who had embraced parenthood, that their love life takes a backseat with the arrival of their little one. Sometimes, it feels like you are losing the spark of romance with your partner, but before you could do something, the to-do list of your