Finally after a-month-and-a-half of his birth, Geeta Phogat's son, Arjun Saroha met his nani and even in his sleep, he expressed his sadness on why she came so late to meet him. 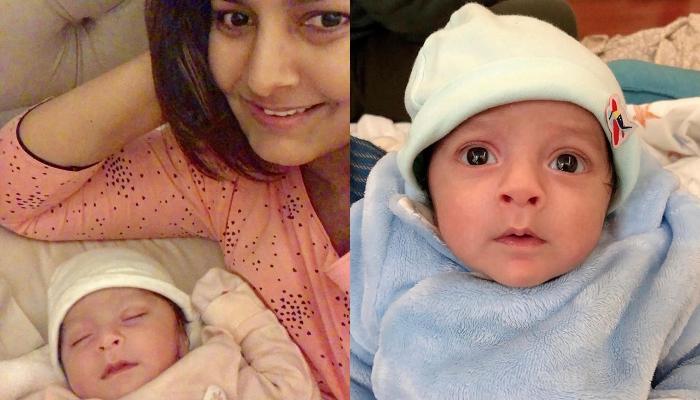 Not only when it comes to seeking permissions on what your parents had said ‘no’ to or fulfilling your demands, but also for invaluable life lessons and words of wisdom, every child looks up to their grandparents. Lucky are the ones, who get to spend time with their grandparents and receive their unconditional and selfless love. Geeta Phogat and Pawan Kumar Saroha’s newborn son, Arjun Saroha too, is one such fortunate and blessed tot. (Also Read: Kareena Kapoor Khan And Soha Ali Khan Dance With Taimur Ali Khan, Inaaya Naumi Kemmu On 'Baby Shark')

It was on January 17, 2020, Geeta Phogat had posted a picture, cuddling her newborn baby boy and their photo exuded maa ki mamta. Revealing the name of their newborn baby boy, Geeta had written, “"I can't even begin to explain just how excited we are for our new baby... We are so, so, so blessed as a family, and I'm speechless at the fact that we had the opportunity to bring a bundle of joy into the world. The love I already have for him is indescribable." We couldn’t be more excited to welcome our beautiful son into our family Welcoming little ARJUN SAROHA to the world… #babyboy #bundleofjoy #littleboy #momlife #momentsinmotherhood.”

Finally after a-month-and-a-half of his birth, Arjun Saroha met his nani and even in his sleep, he expressed his sadness on why she came so late to meet him. Geeta posted a beautiful picture of her son, Arjun sleeping on his nani’s laps but with a sad expression and her caption could be read as “@arjunpawansaroha sote hue bhi apni nani se narazgi dikha raha hai ki itni late milne kyun aaye.” On which, her sister, Ritu Phogat commented, “@arjunpawansaroha bete mere se toh fir tu kabhi baat hi nahi karega.” Geeta replied to Ritu’s comment through Arjun’s Insta story and wrote, “Pehle aap aa jao, saza fir dekhenge.”

On January 24, 2020, Geeta Phogat and Pawan Saroha’s son, Arjun Saroha had completed one-month of existence in this beautiful world. Arjun’s parents are on cloud nine ever since his arrival and Geeta had posted a one-month completion post on behalf of her ‘precious little miracle’. She had written, “Precious little Miracle says, ‘Hi I’m One Month Old Today @arjunpawansaroha’.” Pawan had reposted his wife’s post on his Instagram handle. (Also Read: Kapil Sharma And Ginni Chatrath's Baby Girl, Anayra Sharma Looks Like 'Nanhi Pari' In A Pink Onesie)

It was on December 24, 2019, a day before Christmas when Geeta Phogat and Pawan Saroha were visited by the Santa with their little bundle of joy. Announcing the arrival of their baby boy and sharing the first family picture, Pawan and Geeta had written, “HELLO BOY!! WELCOME TO THE WORLD He is here we are so much in love please give him your love and blessings he made our life perfect now Nothing can be described the feelings of watching your own baby be born Date - 24-12-2019.”

Geeta Phogat’s sister, Babita Phogat had also congratulated the newbie mommy and had posted a picture with her newborn nephew from the hospital. Babita had captioned it as “Congratulations, sister, on your newborn baby. I wish your new bundle of joy a long life full of happiness, fun, laughter and love. May he meet with love, success and happiness in each and every step he takes in life. You just penned down your new legacy with this beautiful baby.. #maasi #babyboy.” Geeta’s sister, Dushyant Phogat had also posted a family picture holding his nephew as the newbie parents, Geeta and Pawan sat beside him. He had written, “Bhagwan ka doosra roop maa aur maa ka doosra roop mama.”

`December proved to be a special one for the Phogat family as Geeta Phogat’s sister, Babita Kumari Phogat had entered the bond of holy matrimony with her fellow wrestler beau, Vivek Suhag. And then, Geeta and Pawan Kumar Saroha welcomed their little bundle of joy, Arjun. The Phogat and Suhag families had hosted a wedding reception bash for the newly-wedded couple, Babita and Vivek on December 2, 2019. But the function became extra special for Geeta and Pawan as their friends and her sisters had organised a surprise baby shower for the soon-to-be parents. The then mommy-to-be, Geeta had looked graceful as ever in a mustard-coloured gown which she had accentuated with a red dupatta and was crowned with a tiara and a sash. (Also Read: Soha Ali Khan Gives A Glimpse Of Her First Sports Day As A Parent At Inaaya Naumi Kemmu's School)

Isn’t Geeta’s little one, such a cutie? Let us know! We all know someone, who loves to party like there’s no tomorrow and reconnects with family and friends to celebrate the special occasions of his/her life, making it even more memorable. Spending time with folks on our birthday makes for some memorable moments that we’ll cherish for a lifetime. It is