At IIFA Awards, Ishaan Khatter had won the Star Debut of the Year â€“ Male and receiving the award from his brother, Shahid Kapoor had made the moment even more special for him.

The list of ‘for keeps’ debutants in Bollywood begins with Ishaan Khatter! The 23-year-old star has already proved his acting prowess with his debut in the non-mainstream cinema, Beyond The Clouds, and soon he became the Dhadak of the nation. Ever since Ishaan has stepped into making his career in Bollywood, he is often compared with his big superstar brother, Shahid Kapoor. And just like Shahid, Ishaan too is on the top of his game in B-town, for his choice of films, dancing skills and sartorial picks. (Also Read: Sonam Kapoor Ahuja And Anand S Ahuja Recreate Their Wedding Picture And It Is Oh So Romantic) 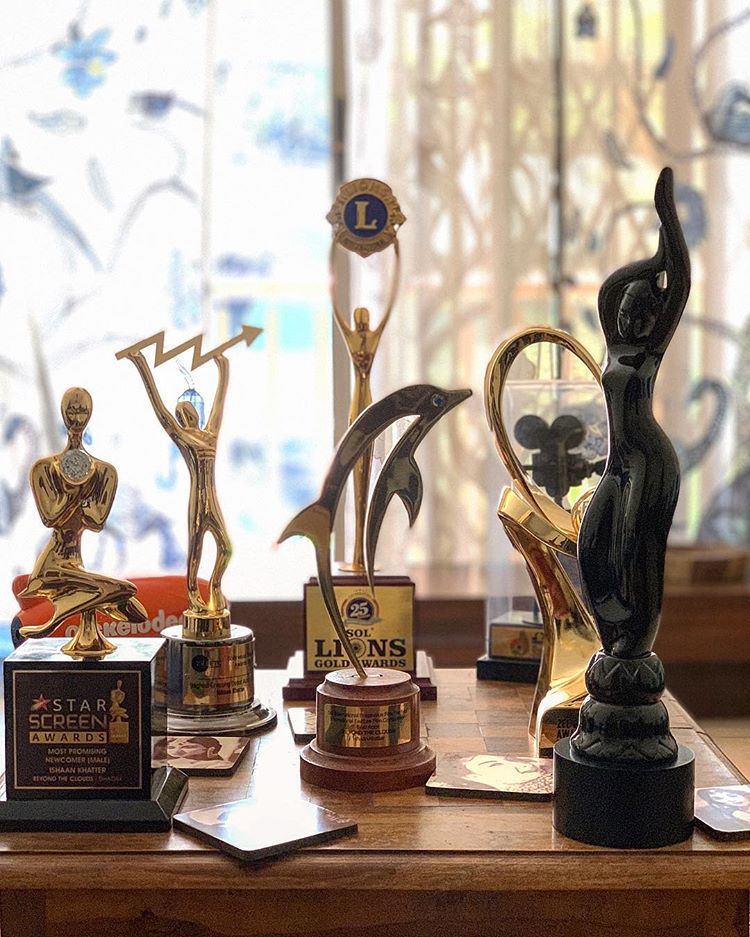 The 20th edition of the International Indian Film Academy (IIFA) Awards, hosted by Ayushmann Khurrana and Aparshakti Khurana was held on September 18, 2019, in Mumbai, and needless to say, the crème de la crème of B-town had graced the red carpet. Ishaan Khatter had won the Star Debut of the Year – Male and receiving the award from his brother, Shahid Kapoor had made the moment even more special for the Dhadak debutant. Posting the priceless moment on Instagram, Ishaan’s one-word caption spoke thousands of words. He captioned his post as “Gratitude.” Shahid too, posted the same picture on his Insta story and wrote, “Congratulations @ishaankhatter Proud” atop it. Ishaan's bhabhi, Mira Rajput Kapoor congratulated her 'little baby brother' for his first IIFA and posted an Insta story to express how proud she is of him. Ishaan and Shahid also grooved to Zingaat from the former's debut film, Dhadak, on-stage along with hosts, Ayushmann and Aparshakti. Check out the video and Instagram stories of Shahid and Mira: 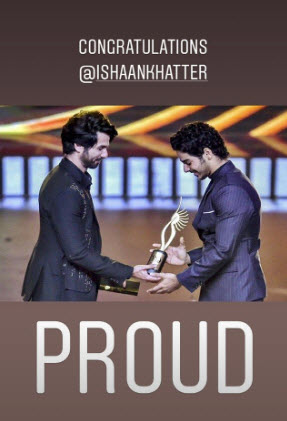 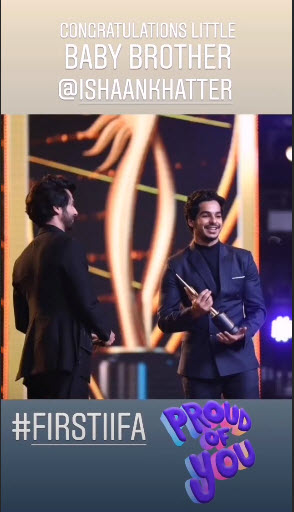 Expressing his feelings on the emotional moment on-stage, Ishaan Khatter remarked, "Fifteen years ago my brother, who is 15 years older than me, won his first IIFA award. Here I am receiving mine from his hands. This is truly special. I have a lot of people to thank but I have to start with him (Shahid Kapoor). I have always looked up to him and he has always been my idol. I don't think I will ever be able to repay what he has given me but I hope I can make him smile like this always." It is not the first time when Shahid Kapoor has expressed that he is proud of his baby brother, Ishaan Khatter. Ishaan has not only made the nation proud with his exceptional performances, but also the Kapoor clan is all-praises for the debutant! Ishaan’s brother, Shahid and sister-in-law, Mira Rajput Kapoor had taken to their Instagram handles and had posted a congratulatory note for the Beyond The Clouds star when he had taken the black lady (Filmfare Award for Best Male Debut) home. While Shahid had shared a still from the film, Beyond The Clouds and had tagged Ishaan followed by a clap emoji, Ishaan’s ‘bhabhidoll’, Mira had posted a photo of Ishaan holding the black lady. Mira had written, “Congratulations @ishaankhatter You make us so proud!” atop it. (Also Read: Parth Samthaan Hosts Crazy Housewarming Party For Kasauti Friends, Only Erica Fernandes Was Missing)

Shahid Kapoor too, has been riding high on the pillion of his professional success, be it unveiling his first-ever wax statue in Singapore or wide appreciation of his last film, Kabir Singh. For the latter, Shahid’s half-brother, Ishaan Khatter had taken to Instagram and had posted a heartfelt open letter about what he feels for the success of Kabir Singh and how Shahid is, as a person. He had written, “As happy as can be for my big brother today who’s always been a shining example of a human being for me. Not a doubt in the world that you deserve the smashing success but it continues to baffle me how you were able to play one of the most complex, lost and damaged characters with such perfection while returning home to being the most centered, loving and responsible family man I know. Thank you for showing me what it means to be a responsible son, father, husband and brother always AND for knocking me out with your performance in and as #KabirSingh. You are (fire and a diamond emoji).” On the 13th episode of Karan Johar’s chat show, Koffee With Karan, Shahid Kapoor had revealed that it was actually him who pestered his mother for a brother. Speaking of being a modern family and how they have managed to be one big happy pariwaar despite separations and second marriages, Shahid had remarked, “When my mom got married for the second time she was pretty clear she didn’t want a second baby because she felt like, you know, it was pretty late, she got married in her early 30s. I kept pestering her saying that it is not fair, I deserve a sibling. And she literally had Ishaan for me. I begged her for two or three years. And finally she gave in and said ‘Alright, I am gonna have one’.” 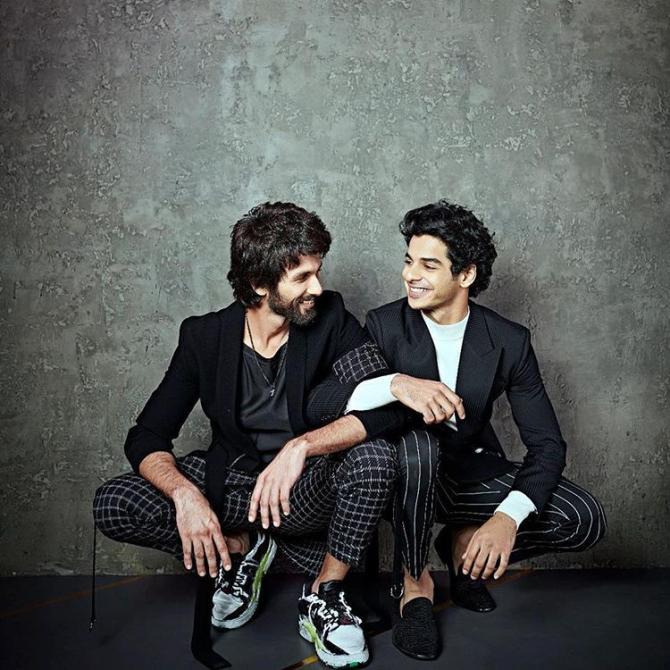 In a throwback interview with Pinkvilla, Neliima Azeem had praised and gushed over how wonderfully, her two boys, Shahid Kapoor and Ishaan Khatter have grown up. She had remarked, “My stress was over. I was a single mother and till today he is taking care of Ishaan and me in every way. He is like 'hats off'! Shahid has worked very hard and has had a very challenging journey and the thing about both my boys is that they are very good sons, very honest and clean and extremely vulnerable. Ishaan is more like joyous and has his own energy. All I can say is, both of them have been sparkling in their own times. Ishaan has been very fortunate that he started with Majid Majidi and then Dharma, with Shashank and Karan with him so, Mashallah, he had a quicker and faster journey and I suppose the younger ones do have it that way while the elder ones do create a little more hard work for themselves. That's the way it’s always been. But both of them are wonderful.” 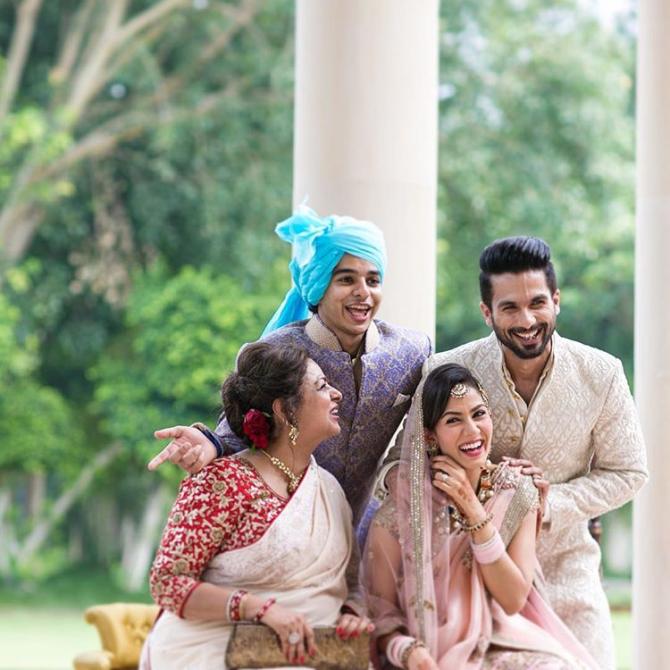 Speaking about how Shahid Kapoor had guided and trained his younger brother, Ishaan Khatter, Neliima ji had continued, “In Ishaan’s case, his guru has always been his brother and it is very kind of him to always give me the honour and that standing in his life. I have watched both the brothers very closely and it is amazing how Sasha has guided him in life. He has played more than an elder brother’s role because I was a single mother, there was no father as such living with us. So, Ishaan is mostly being guided, groomed and trained by his brother.” (Also Read: Alia Bhatt Wishes Her 'Pops' Mahesh Bhatt On His 71st Birthday With An Unseen BTS Glimpse Of Sadak 2) 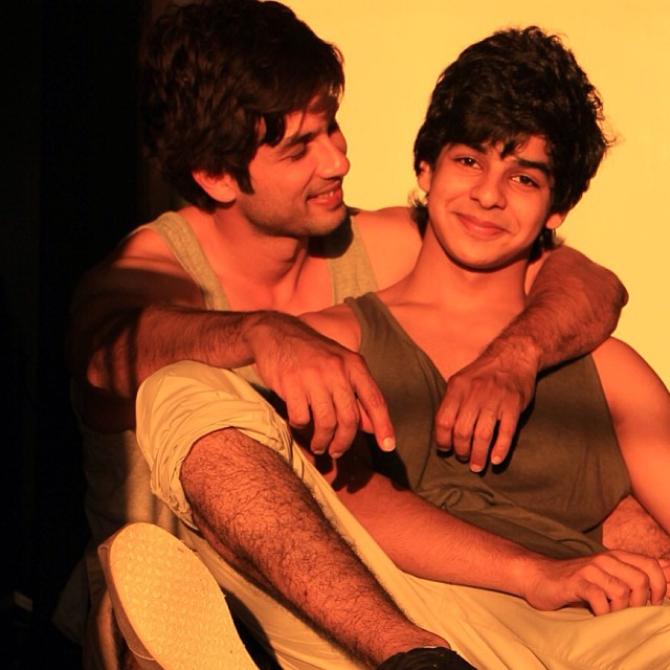 Congratulations Ishaan for the award! 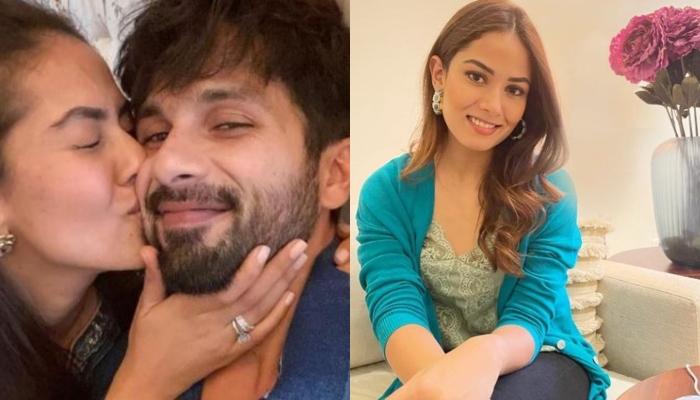